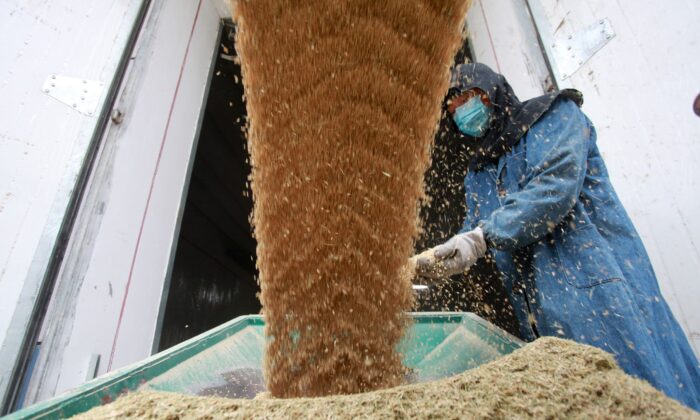 A worker next to a machine transporting newly harvested paddy grains to a storage warehouse in Yangzhou, Jiangsu Province, China, on Oct. 25, 2019. (Stringer/Reuters)
China Business & Economy

BEIJING—The condition of China’s winter wheat crop could be the “worst in history,” the agriculture minister said on Saturday, raising concerns about grain supplies in the world’s biggest wheat consumer.

Speaking to reporters on the sidelines of the Chinese regime’s annual political meetings, Minister of Agriculture and Rural Affairs Tang Renjian said that heavy rainfall last year delayed the planting of about one-third of the normal wheat acreage.

A survey of the winter wheat crop taken before the start of winter found that the amount of first- and second-grade crop was down by more than 20 percentage points, Tang said.

“Not long ago we went to the grassroots to do a survey and many farming experts and technicians told us that crop conditions this year could be the worst in history,” he said. “This year’s grain production indeed faces huge difficulties.”

The minister’s comments underscore concerns about China’s grain supply at the same time as the war between Russia and Ukraine, which together account for about 29 percent of global wheat exports, has disrupted supplies causing wheat prices to surge to 14-year highs.

Fueled by the Ukraine crisis, wheat prices in China soared to a record this week on existing domestic supply worries.