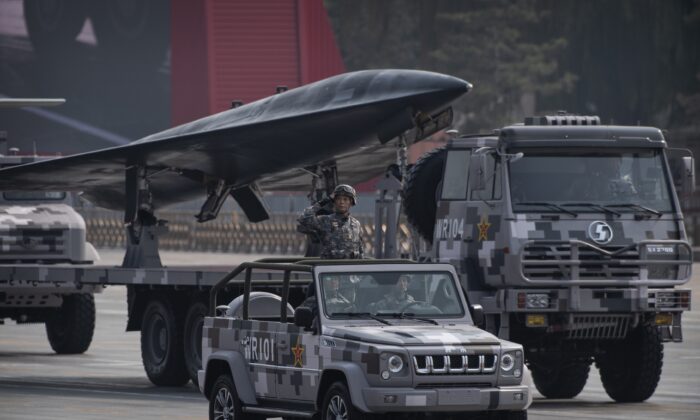 A Chinese soldier salutes in front of a military drone during a parade to celebrate the 70th anniversary of the founding of the Chinese communist regime at Tiananmen Square in Beijing on Oct. 1, 2019. (Kevin Frayer/Getty Images)
Thinking About China

A few weeks ago, China made headlines when it tested a hypersonic glide vehicle capable of carrying a nuclear weapon. This test also revealed that China might be trying to develop a “fractional orbital bombardment” capability.

These capabilities, if combined, means that China could acquire the capacity to negate or overwhelm the United States’ nuclear early-warning and missile-defense systems.

The prospect of a nuclear-armed drone is disturbing. However, China is already a global leader in a number of other kinds of dangerous unmanned systems.

Militaries around the world rely on unmanned aerial vehicles (UAVs) to conduct a multitude of tasks, usually those deemed too “dull, dirty, or dangerous” for manned missions. Most UAVs carry out routine reconnaissance, but they also act as decoys, serve as communication relays, and or even conduct electronic warfare (jamming).

Increasingly, however, militaries are seeing the appeal of armed drones—that is, UAVs capable of carrying and launching air-to-ground weapons. The United States operates a number of armed drones, such as the Predator or Reaper systems, which are outfitted with precision-guided air-to-ground munitions such as the laser-guided Hellfire missile. These weapons have frequently been used against terrorist organizations and insurgents.

In recent years, China has emerged as a leading builder—and exporter—of armed drones. Over the past two decades, the country has aggressively entered the UAV market, rapidly becoming one of the world’s largest manufacturers of all kinds of drones, ranging from the very small (typically hand-held) types, all the way up to very large high-altitude, long-endurance (HALE) UAVs.

Most of these are unarmed versions, used for surveillance and reconnaissance missions. More recently, however, China has gotten into the business of making armed drones, with considerable success. As a result, Chinese drones (also called unmanned combat aerial vehicles, or UCAVs) are a remarkable exception to the usual middling type of weapons systems that Beijing usually flogs on the global arms market, with mixed results.

China has become a major supplier of armed drones to militaries around the world. According to the Stockholm International Peace Research Institute (SIPRI), Beijing has sold armed UAVs to at least 16 countries in three continents, including Egypt, Indonesia, Iraq, Jordan, Nigeria, Saudi Arabia, Serbia, and the United Arab Emirates (UAE). Many of these countries are close allies of the United States. These sales have been worth more than US$700 million.

Moreover, these drones are being used regularly in combat. In 2018, a Chinese UCAV operated over Yemen by UAE armed forces fired a missile at an SUV, killing a senior Houthi rebel leader. Nigeria has been using its Chinese drones to fight the Boko Haram insurgency.

China has so far exported at least two types of armed drones, the C-4 Wing Loong (also called the Pterodactyl) and the Caihong. Both bear a striking resemblance to two existing U.S. UCAVs, the MQ-1B Predator, and the MQ-9 Reaper. The Wing Loong is roughly the same size as the Predator, about 29 feet long, and with a wingspan of 45 feet. It carries a much smaller payload, however, about 220 pounds, compared to the Predator’s 1,100 pounds.

The Caihong (Rainbow) drone is more or less a clone of the MQ-9 Reaper. There is also a larger version of the Caihong drone, designated the CH-5, being readied for the export market. The CH-5 has a wingspan of 66 feet and a takeoff weight of about 3 tons. It can carry a maximum payload of around 900 kilograms—about two and a half times more than previous UCAVs in the Caihong series. Moreover, it has an endurance of 60 hours, giving it a 4,000-mile range.

Other Chinese UCAVs, larger or with more powerful engines for longer ranges, are also in development.

Armed drones are rapidly becoming a very profitable segment of the global arms business, and one that is likely to grow significantly over the coming decades. When it comes to exporting armed drones, China has several advantages over its competitors.

In the first place, Chinese UCAVs are comparatively cheap. A Wing Loong drone costs around US$1 million each, which is about one-fourth the cost of a Predator.

Secondly, China generally has a no-questions-asked policy when it comes to arms sales. Beijing has been prepared to export armed drones to countries that other drone-manufacturing countries, like the United States, might be loath to sell to. For example, Washington had been reluctant to transfer armed drones to Jordan or the UAE, particularly as UCAVs have been used to kill thousands of people, many of them civilians, in Yemen.

In fact, the Trump administration only permitted the sale of MQ-9 Reaper drones to the Emirates, in 2020, after the UAE acquired UCAVs from China.

What’s more, after their deployments in Yemen and Nigeria, China is one of the few countries to have had their UCAVs actually used in combat (“bloodied in battle”), greatly boosting the reputation of these weapons.

Further helping the Chinese is the fact that the global market for armed drones is new and relatively open. This has provided China with a unique opportunity to get into this business on the ground floor.

Chinese UCAVs, while perhaps not as capable or as high-grade as their competitors, are therefore filling a critical—and lucrative—market niche. Countries may not be lining up to buy Chinese fighter jets or tanks, but armed drones are a segment where China has at least three advantages over its competitors: it can offer a “good-enough” product, at a relatively low price, to just about anyone who has the cash.

All these factors provide China a golden opportunity to become a major supplier—and, therefore, also a major proliferator—of all types of armed drones. Consequently, U.S. and allied forces may find themselves facing adversaries armed with Chinese UCAVs, complicating their military actions.