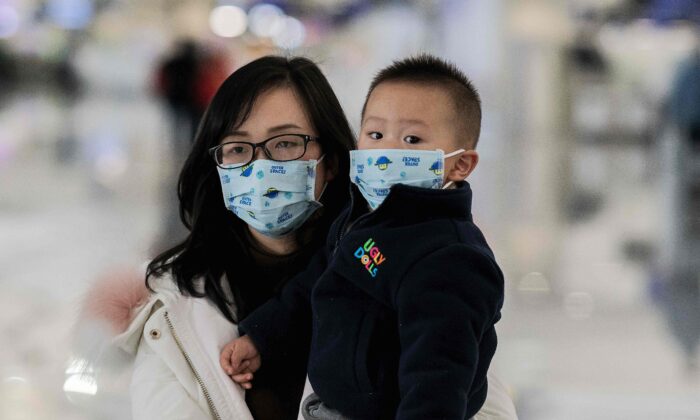 A woman and a child wearing protective masks walk toward check-in counters at Daxing international airport in Beijing on Jan. 21, 2020. (Nicolas Asfouri/AFP via Getty Images)
Thinking About China

China: A Country Where Women Are Left Battered and Bruised

Companies in China, we’re told, are recruiting more women, granting them even more opportunities to succeed.

At long last, after years of oppression, Chinese women are finally considered equals. Earlier this year, to mark International Women’s Day, Shanghai Stock Exchange rang its bell in celebration of its female citizens. How magnificent. Is there a more noble way of celebrating women? Is there a higher honor than ringing a bell?

If you’re detecting sarcasm, then your sarcasm-detecting software is working perfectly fine.

The Chinese Communist Party (CCP), not content with the ringing of bells, has gone one step further—it recently made Wang Yaping the country’s first ever female astronaut.

However, such sporadic gestures of “kindness” toward women should not distract us from the truth: China is a place where women are left battered and bruised. Sending one woman into space doesn’t change this fact.

In early November, the Chinese tennis star Peng Shuai accused Zhang Gaoli, the former vice-premier, of sexual assault. In a social media post, according to Shuai, Gaoli, a former member of the CCP’s Politburo Standing Committee, assaulted her at his home, even as she cried and asked him to stop.

A few weeks before Shuai’s troubling allegations, Li Yang, the controversial creator of Crazy English, a non-traditional method of learning English, was accused of physical abuse. The accusations were made by Kim Lee, his ex-wife. “Ten years ago,” she wrote, “Li Hua [youngest daughter, age 12] rescued me from your violence. Today, Li Na [eldest daughter, age 15] had to save Li Hua from your violence. You have not changed a bit.” Lee continued, “when you beat me, you said it’s Chinese culture. I had no choice but to divorce you. Because you are the father of my children, I granted you my forgiveness. I congratulated you for getting married to a young woman and having a new baby.”

What sort of man intimidates and threatens women and girls? In communist China, sadly, Li Yang is not an outlier. In fact, his abusive behavior is considered normal.

Five years ago, Beijing introduced China’s first Domestic Violence Law. Has the law made Chinese women any safer? The answer appears to be a resounding no. Every 7.4 seconds, somewhere in the country, a woman is the victim of domestic violence. One in four women in China have experienced domestic violence. In a land of 701 million females, far too many women have become accustomed to physical abuse. Rather perversely, wife-beating is often viewed as a form of “patriarchal power.”

In Xinjiang, where thousands of innocent people are being “reeducated,” Uyghur women have been—and one assumes, continue to be repeatedly raped, assaulted, and tortured. Many have experienced forced sterilization.

Regardless of age, females in China are the victims of absolutely horrific crimes. Last year, a 4-year-old girl in Heilongjiang Province was almost beaten to death by her then 28-year-old father and his 30-year-old girlfriend. The child was systematically beaten and scalded with boiling water. According to reports, the little girl had her head slammed against the wall; this particular assault resulted in nasal bone fractures and brain compression. What drives such hatred toward young girls and women?

According to the researcher Winter Wall, China’s one-child policy, which was scrapped only a few years ago, has played a pivotal role in creating a hostile environment for females. Will China’s new three-child policy change things? I have my doubts. As Wall noted, male children are considered more valuable to the family; moreover, when parents enter old age, sons are tasked with taking care of them. Females, on the other hand, once married, often take care of their husband’s parents.

Furthermore, China has a long history of female infanticide. Although the practice is now banned in the country, there is every reason to believe that the cycle of abuse against women will continue.

In the World Economic Forum’s latest gender equality report, China sits in 108th position, below Liberia, a country where female genital mutilation is carried out with alarming frequency, and Nepal, a country where child marriage occurs.

Interestingly, as The Economist recently noted, since Xi Jinping took power in 2012, China’s gender equality rankings have plummeted. In the same year, China was 69th on the list. What does this tell us about Xi and the CCP? As long as Xi and the CCP remain in charge, it’s difficult to see how attitudes toward women will change.