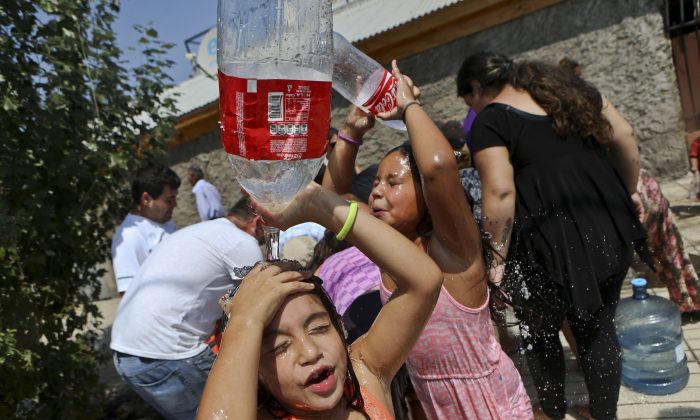 Two girls refresh themselves while residents gather water from a fire hydrant at a neighborhood in Santiago, Chile on Feb. 27, 2017. (AP Photo/ Esteban Felix)
International

SANTIAGO, Chile—Hundreds of thousands of homes in communities around the Chilean capital remain without water as authorities struggle to restore service following floods caused by Andean rainfall. There are three confirmed deaths and 19 people reported missing in the flooding.

More than half of the communities in the greater Santiago area and as many as 5 million people nationwide were affected by the weekend flooding as rocks and other debris choked the intakes for urban water systems.

The Aguas Andinas water company said Monday that service had been restored to about 50 percent of the homes and businesses that suffered cuts. Authorities over the weekend said service was cut to as many as 1.4 million homes in and around Santiago starting Saturday.