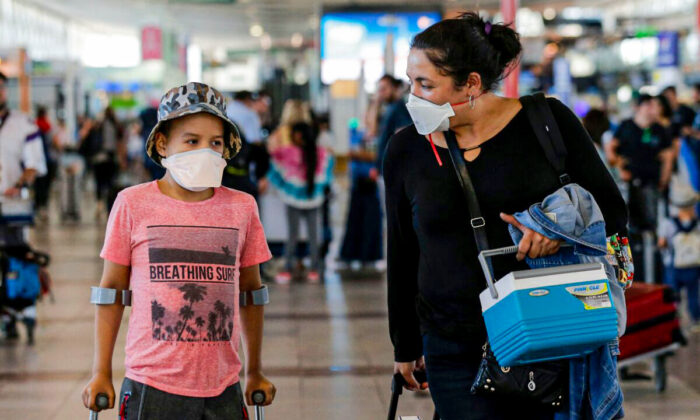 SANTA CRUZ, Bolivia—Like many nations, Chile has witnessed a significant increase in CCP (Chinese Communist Party) virus cases since the beginning of the year.

Cases increased by 84 percent during the week ending Jan. 3, followed by another 145 percent increase during the subsequent week through Jan. 10.

Unlike most countries grappling with post-holiday case spikes, however, Chile boasts the highest CCP virus immunization levels in Latin America, at 88.9 percent.

Additionally, the small South American nation joined the list of the top five most vaccinated countries in the world.

Officials in the Chilean Ministry of Health attributed the jump in recent positive cases to the highly contagious Omicron variant, which researchers identified last November.

There are considerably fewer deaths and hospitalizations associated with the recent influx of new cases.

The introduction of a fourth vaccine dose, or second booster shot, was announced on Jan. 10 by outgoing President Sebastian Pinera, who reaffirmed the government’s commitment to immunization as the primary line of defense against infection.

However, some evidence suggests natural immunity is playing a pivotal role in the prevention of the severe version of the illness.

On Jan. 19 the Centers for Disease Control (CDC) in the United States released medical studies from California and New York, which compiled COVID-19 case data from May-November 2021. The findings showed as of October, people who survived a previous infection fared better against the disease than those who had only been vaccinated.

Another study released by the Virus Research Center at the University of Glasgow in early January showed that natural immunity from a previous infection was more effective than people who only received two doses of a vaccine. However, the natural immunity proved less potent than those who never contracted the disease, but received a third immunization.

Whilst the CDC recognizes the existence of natural immunity to the COVID-19 virus, it maintains that the best prevention against developing serious symptoms is vaccination.

However, the efficacy of certain immunizations have also been brought into question.

Last April, the director of the Chinese Center for Disease Control and Prevention, Gao Fu, admitted the efficacy of Chinese vaccines needed to improve.

In the early days of its inoculation schedule Chile relied heavily on China’s Sinovac-CoronaVac to protect its population. The aforementioned vaccine is an inactivated virus that’s only 51 percent effective.

However, Pinera announced on Jan. 24 that a shipment of 2 million doses of Moderna would guarantee a second booster dose to all Chileans.

With a population of more than 19 million people the arrival of the small Moderna shipment highlights the overall limited number of Western immunizations Chile has been able to secure for its population.

COVID-19 has reportedly killed 39,512 people in Chile, according to the World Health Organization.