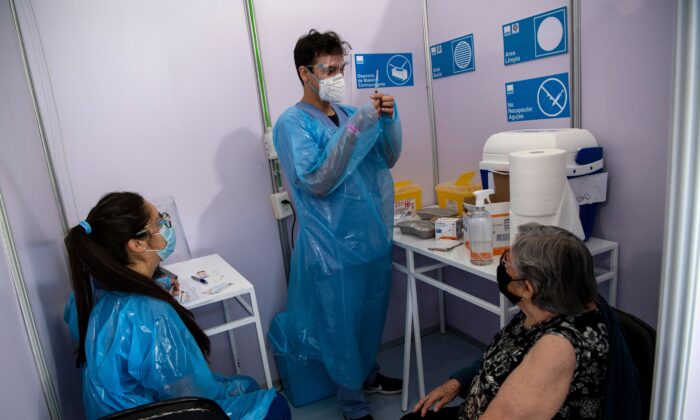 A healthcare worker prepares to administer a dose of China's Sinovac CoronaVac vaccine to a person at a vaccination centre mounted at the Bicentenario Stadium in Santiago, Chile on Feb. 3, 2021. (Martin Bernetti/AFP via Getty Images)
Americas

SANTA CRUZ, Bolivia—Outgoing president Sebastian Pinera announced that as of Jan. 10 the nation will begin the next series of vaccinations against the CCP (Chinese Communist Party) virus.

Immunocompromised people over 12 years of age who received their first booster dose before Sept. 12 last year will be eligible for a fourth dose, or second booster, of the vaccine.

Pinera said, “The world and Chile have been suffering the devastating consequences of the pandemic caused by COVID-19 for more than two years and today, due to the new variant Omicron, the world is experiencing record levels of contagion.”

The second stage will begin on Feb. 7 when residents over 55 years of age, who received their first booster before Aug. 15 of the previous year, will have access to the next round of immunizations.

Chile is the first Latin American nation to offer the second booster dose against the virus. It has the highest vaccination rate in the entire region with more than 87 percent of its population fully immunized and more than 44 million doses administered.

Approved immunizations for use against the CCP virus in the country include Pfizer-BioNTech, AstraZeneca, Johnson & Johnson, the Chinese Sinovac-CoronaVac, Sputnik V, and the jointly developed Chinese-Canadian CanSino vaccine.

On Nov. 29, the government decided to postpone relaxing their strict entry requirements and issued new restrictions for travelers arriving from seven African countries in a bid to stop the arrival of the new variant.

However, vaccination and entry restrictions weren’t enough to curb a spike in new cases, which have been attributed to travelers arriving with Omicron.

Undersecretary of health Maria Teresa Valenzuela said one month after the introduction of the new variant, “we have a total of 698 confirmed cases, 95 percent of which are travelers.”

She added only 18 of the known cases were locally based.

Nevertheless, there’s a key distinction between the two peaks: The country is seeing far fewer severe cases with the Omicron variant.

“We can see a noticeable difference, for example, in the ICU situation on both days. On July 8 we had 2,167 patients on mechanical ventilation, today that record drops considerably to only 404 patients,” Paris said.

Chilean officials remain adamant about the role of immunization in their population’s defense against the virus.

“There is evidence from the population—and at the level of neutralizing antibodies—suggesting the effectiveness of the boosters also falls over time, but at a slower rate than what we see with primary regimens.

“It’s estimated that around six months after the reinforcement, the vaccines used will have an effectiveness against Covid-19 of less than 60 percent,” Valenzuela said.