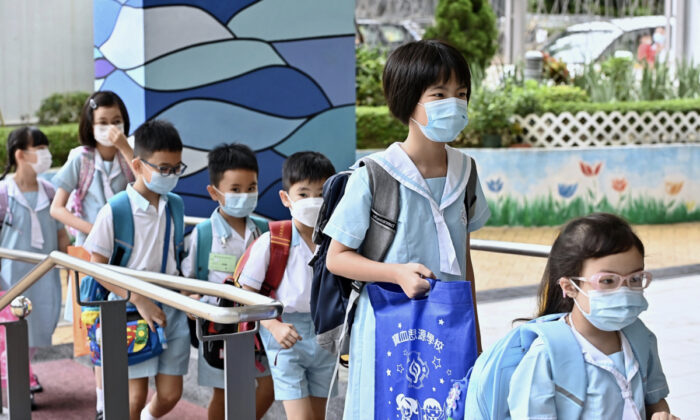 There are concerns the new measure would affect children’s physical and psychological development, and their social life
By Kaworu Tsang

Dr. Chuang Shuk-kwan, head of the Communicable Disease Branch of the Centre for Health Protection in Hong Kong, confirmed on Sept.1. that the Hong Kong government will announce as early as this week, that it will lower the vaccine pass age limit to include children as young as five years old.  That means children five and above will have to have two jabs of vaccination before they can enter regulated facilities. The Hong Kong Committee on Children’s Rights issued a statement on Sept. 2, expressing concern that the measure would affect children’s physical and psychological development, and their social life; and urging the government to withdraw it.

The Hong Kong Committee on Children’s Rights said in its statement that the extended scheme of vaccine pass is too stringent. Some children are already banned from extracurricular activities in school because they have not been vaccinated, and if they are further banned from going into public places, it will have a profound impact on their development and will also reduce the family and social life they deserve.

The statement also pointed out that if children are not able to follow their families into markets, shopping malls, and other places, they may be forced to stay at home alone, and there are hidden worries about child care and protection issues. In general, young children do not have their own mobile phones and it is impractical to require them to carry paper certificates with them. Some poor families would have to buy mobile phones for their children, which can be an increased financial burden.

The committee underscored their support for vaccination but pointed out that vaccines are not the only way to prevent the spread of the virus. Lowering the vaccination pass coverage age does not alleviate parents’ concerns about vaccinating their children. The committee said children’s fundamental rights should not be used in exchange for vaccinations and urged the government to withdraw the program and explain the new vaccine to parents and understand their concerns.