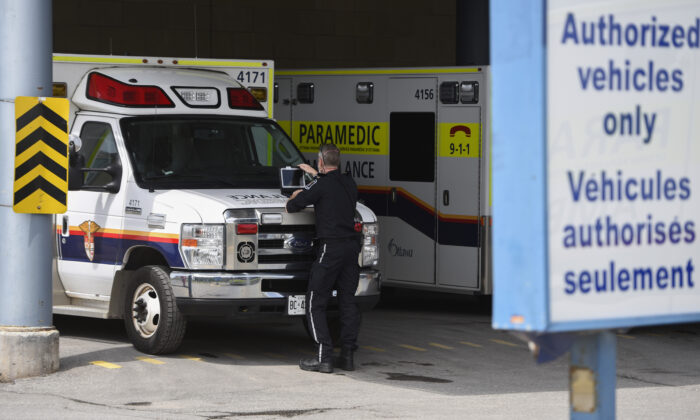 Ambulances parked outside of a hospital in Ottawa in a file photo. (The Canadian Press/Justin Tang)
By Marnie Cathcart

What is respiratory syncytial virus (RSV), the virus currently being blamed for a surge in pediatric emergency room visits across Canada?

Symptoms include coughing, fever, runny nose, and a loss of appetite and energy, says the Canadian Paediatric Society. In more severe cases, hospitalization is required where supplementary oxygen or intravenous fluids can be given if needed. Babies are most at risk of serious complications.

Secondary bacterial infections like pneumonia and bronchiolitis can result from RSV. There is no drug that prevents RSV infection; treatment focuses on reducing symptoms and addressing secondary infections.

RSV activity, which typically peaks in the winter, is rising and is above expected levels for this time of year, according to Public Health Agency of Canada (PHAC) data.

Some 1,045 cases were detected among 14,938 tests conducted for the week ending Oct. 29, the latest week for which surveillance data is available. This is a test positivity rate of 7 percent, nearly double the rate of 3.57 percent from two weeks earlier, when just over 500 cases were detected out of 14,114 tests.

“There is not a dedicated RSV or pneumonia floor,” says Dr. Robert Barnes from the Montreal Children’s Hospital, CTV News reported in a Nov. 5 article. “We are so overwhelmed that it would not surprise me if just about every patient on a particular floor might have that problem.”

Emily Gruenwold, president and CEO of Children’s Healthcare Canada, a national association of hospitals and health authorities, said in the same article that nearly all children’s hospitals across Canada, “almost without exception,” are running at 100 percent occupancy or more.

In Vancouver, BC Children’s Hospital predicted a wait of over 8 hours at 9:09 a.m. local time on Nov. 7. Saskatchewan emergency wait times were offline. The Winnipeg Regional Health Authority reported a wait time of 5.25 hours at the Children’s Health Sciences Centre on the same day at 11:10 a.m. local time.

Barnes from the Montreal Children’s Hospital noted that public health restrictions over the past two years have caused a reduction in children’s immunity.

“We have a huge amount of our very young children in the community who did not get so much of a turn with these viruses last winter or even the winter before that,” Barnes said. “So the virus is spreading much more, and much faster among our young people.”

Barnes said his hospital’s emergency room was at 193 percent occupancy on the night of Nov. 1, much higher than the average occupancy rate of 113 percent around the same period in 2019. Emergency wait times for the least critical patients are between 18 and 24 hours.

In Edmonton, more than 14,000 children were home sick from school during the week ending Nov. 4, reported Global News. One pediatric doctor says she has never seen so many children sick.

“I’ve never seen this many viruses in children so frequently and so severe,” said Dr. Tehseen Ladha, a pediatric specialist from the University of Alberta.

“All my clinics are children with respiratory viruses, with stomach flus, and many of them are children that have virus after virus. They’ve been sick since school has started,” she said.

Dr. Eddy Lang, clinical department head for emergency medicine for the Calgary zone with Alberta Health Services, told Global News that respiratory infections are more severe than usual. “I have never seen this much RSV affecting so many young children with such high oxygen requirements in so many of them,” said Lang.

Dr. Sam Wong, president of pediatrics at the Alberta Medical Association, in the same article said emergency rooms and hospital units are “pretty full” and that it isn’t clear why RSV infections are higher.