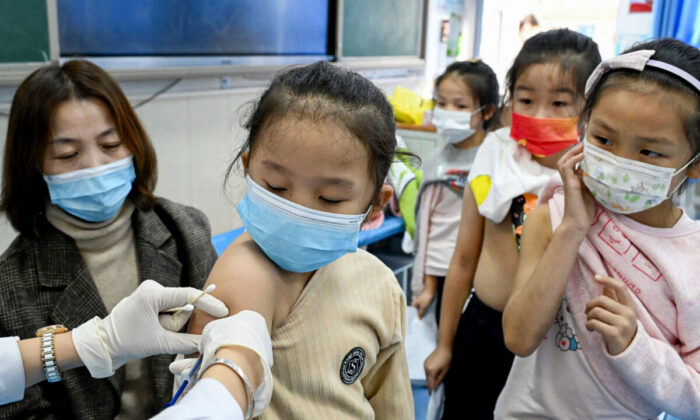 A child receives the Covid-19 vaccine at a school in Handan, in China's northern Hebei province on Oct. 27, 2021, after the city began vaccinating children between the ages of 3 to 11. (-/AFP via Getty Images)
Vaccines & Safety

Tears would well up in the 5-year-old kindergartner’s eyes whenever he saw other children snacking—a luxury to the boy ever since he was diagnosed with Type 1 diabetes in late January. The diagnosis came 1 1/2 months after he got his second dose of a Chinese COVID-19 vaccine.

Puncture marks are filling up every finger of both of the boy’s hands due to the constant finger pricking needed to monitor his blood sugar level, according to his father. He gets four doses of insulin every day, and every meal is weighed and measured for carbs.

The boy belongs to a group of between 600 and 1,000 Chinese children diagnosed with Type 1 diabetes between last October and May, according to an open letter signed by parents in this cohort. Beijing ushered a nationwide campaign in late October to inoculate children aged 3 to 11—the age group covering most of the diabetic patients.

On May 31, the eve of International Children’s Day, their parents wrote an open letter pleading for public attention.

“We initially didn’t link it with vaccines, but thinking back and forth, our children didn’t have any change in lifestyle or diet, the only change was getting the vaccine, and they got symptoms after the vaccination,” they wrote in the letter that was first published on a site managed by Wei Boxing, a Chinese health care activist.

The letter had over 300,000 views and 800 comments as of June 11. Many commenters were anxious parents saying they were in the same boat. They left their phone numbers and asked to be added to a group on Chinese social media WeChat containing people who said they or a family member had experienced severe side effects after taking Chinese COVID-19 vaccines.

Type 1 diabetes occurs when the immune system attacks itself and destroys beta cells in the pancreas that produce insulin, which regulates blood sugar levels. Its telltale signs include excessive thirst, frequent urination, unintended weight loss, irritability, hunger, fatigue, and blurred vision. It usually develops in children and young adults, especially among those around 13 and 14 years old, although it can appear at any age, according to the Centers for Disease Control and Prevention. Genes and exposure to viruses and other environmental factors could both cause the disease.

The parents’ letter came months after hundreds of parents alleged that the COVID-19 vaccines caused their children to contract leukemia. Many of those diagnosed with leukemia are between the age of 3 and 11.

Children in China Diagnosed With Leukemia After Taking Chinese Vaccines

The parents of newly-diagnosed diabetic children said that they initially started a group on WeChat to share treatment tips. They started two more groups after the membership of the first group grew to 500 members, the maximum size allowed for a WeChat group. About 600 of them have registered their real names with the group, according to the open letter.

The 5-year-old boy had his first dose arranged by his kindergarten on Nov. 5, followed by a second dose one month later. He started experiencing increased thirst and frequent urination from Jan. 15, his father said.

Being denied small pleasures he and his peers once took for granted was hard to reconcile, especially on June 1, International Children’s Day, when all the kindergarteners were celebrating by enjoying a buffet.

“He cried so hard because we were always taking him home to eat,” his father Wang Bin (alias), from port city Ningbo in eastern China’s Zhejiang Province, told The Epoch Times the next day. To console their son, Wang’s wife bought him chicken wings and cake for dinner.

Afterward, the boy’s blood glucose levels shot up to 306 mg/dL, a dangerous level that they were told could have left him in a coma.

The mother, who quit her job following her son’s diagnosis, rushed to give the boy an insulin shot. She anxiously watched his blood sugar changes afterward and barely closed her eyes throughout the night.

Wang, a delivery driver, thought about buying a glucose monitor to minimize his son’s ordeals, but the cost—450 yuan ($67) every half month—was too much for the family, given that Wang is the only breadwinner and they have car loans and a mortgage to pay off.

Most Chinese families, like Wang, have only a single child due to the regime’s decades-long one-child policy that was only abolished in 2016. To the parents, their children are “what we live for and everything we have,” they wrote in the letter.

“Each time a new member joins [the WeChat group], our heart would skip a beat,” the parents wrote. “Type 1 diabetes is a lifelong disease. Our children have lost the joys of childhood and youth. They have become a group of patients.”

Wei, the health care activist, said on his website that he has received information on over 300 diabetic cases where symptoms appeared after taking homegrown Chinese vaccines.

Most of them, he said, are linked with Sinopharm and Sinovac, two of the largest Chinese COVID-19 vaccine makers. A handful of the patients had gotten a vaccine from Anhui Zhifei Longcom Biopharmaceutical, which has been approved for use in Colombia, Indonesia, and Uzbekistan alongside China. The first two are inactivated vaccines, meaning they contain copies of the virus that have been killed, while the latter is a protein subunit vaccine, which is made with isolated viral proteins.

Among the samples that Wei analyzed, around two-thirds were in the 3-12 age group.

The Chinese authorities didn’t confirm nor deny whether certain side effects may have arisen from the vaccine.

“We are still in the process of understanding irregular vaccine reactions and its diagnosis. This requires us to constantly improve,” said Wang Huaqing, a chief expert leading the national immunization program at the Chinese Center for Disease Control and Prevention, at a press conference in late May. He said that anyone who suspects to be undergoing vaccine-related side effects should report this to health authorities, and a multidisciplinary group of experts will probe the cases before giving an opinion.

“If you feel unwell after vaccination, especially if the symptoms are persistent and severe, go to the doctor immediately,” he said.

But despite such official assurances, local immunization authorities have uniformly been dismissing parents’ concerns, telling them, in “almost identically worded” evaluation reports, that the diabetes was “coincidental” or “unrelated” to the vaccines, they said in the letter. Authorities had said the same to parents whose children were diagnosed with leukemia after inoculation.

In a May 30 response to a case report, where a child began showing Type 1 diabetic symptoms three days after getting jabbed with a COVID-19 vaccine in 2021, Guangdong provincial health officials said it “doesn’t preclude causal relationship with vaccination,” but said the case was “unlikely to be an adverse reaction to preventative inoculation.” They noted that the child had a high blood sugar level before vaccination.

“Honestly, we don’t think local governments should rush into such conclusions,” wrote the diabetic children’s parents. “Medical development is a result of clinical studies. Since our children have Type 1 diabetes after a vaccine injection, and they belong to a certain group, even if no prior evidence indicates the two are linked, what happened to them should receive serious attention.”

“Asserting that ‘COVID-19 vaccines have nothing to do with leukemia and Type 1 diabetes’ without careful medical analysis is irresponsible,” Dong, currently a chief scientific officer for a Swiss biotech company, told The Epoch Times. The problem with such pronouncements, she said, is that they are “too absolute.”

Dong noted clinical and case studies warning of possible heart inflammation from mRNA and protein-based COVID-19 vaccines, and those flagging a risk of acute hepatitis from mRNA vaccines. Both of these are autoimmune conditions that the vaccine’s spike protein appears to be responsible for, she said.

By the same analogy, “in theory, the vaccine could trigger an immune response targeting the insulin-producing beta cells,” she said. “This is not impossible.”

This could apply to any kind of COVID-19 vaccine, she added, including mRNA, inactivated, and protein-based vaccines.

A March Lancet study of 181,280 COVID-19 patients found that those infected with the virus were 40 percent more likely to get Type 2 diabetes. Francis Collins, then-director for the National Human Genome Research Institute, wrote in a June 2021 blog post highlighting the “troubling connection” between diabetes and acute COVID-19 infection, citing two NIH-funded studies that confirmed infection of pancreatic beta cells in people who died of COVID-19.

This should raise alarm about the potential risk of the vaccine as well, said Dong.

“Whether it’s the vaccine or the virus, both contain the spike protein that could trigger diabetes,” she said.

“Getting infected and getting the vaccine could both lead to autoimmune attacks and chronic inflammation, and result in damage in insulin cells.”

‘The Vaccine Is the Cause’

While China stated that the vaccine was not mandatory, parents were under considerable pressure to get their children vaccinated. Yang Yi’s (alias) 12-year-old son had just finished an appendectomy when the teacher asked his class to get a second shot. Both Yang and Wang’s sons took the Sinovac vaccines.

“The teacher said they can’t go to school if they are not vaccinated, so everyone has to get the shots,” Yang told The Epoch Times. She put it off for a month before yielding in mid-December.

Shortly after, Yang began to see the boy eating and drinking a lot more than usual even as he began losing weight. He was diagnosed with Type 1 diabetes in March.

“No one in our family history has had diabetes,” she said. Yang believes many people have not made their diabetes diagnosis public. In her home city of Hefei, the capital of the eastern Chinese province Anhui, she knows of at least 30 such cases. “In writing, they [authorities] say it’s coincidental. Not a single organization dares to suggest that the vaccine may be the cause, but they know it well in their hearts,” she said. “The vaccine is the cause.”

Little has been discussed in Chinese news outlets about the potential side effects of homegrown vaccines, even as concerns proliferate on social media. But previous studies have linked other COVID-19 vaccines with diabetes.

In Japan, at least two women, aged 51 and 73 respectively, developed Type 1 diabetes after taking the Moderna mRNA vaccines. Neither woman’s relatives had an autoimmune disease, according to the case studies.

Even for those with a family history of diabetes, it is still possible for an outside factor such as vaccination to accelerate the disease’s development, even though it’s hard to assess how much role each element plays, Dong said.

Wu Ming (alias) from Fujian Province on China’s southeastern coast, like other parents who spoke with The Epoch Times, believes that the diabetic cases are not isolated incidents. Her 3-year-old, now in an insulin-dependent state, began experiencing frequent urination at night beginning in March, a month after his first dose of the COVID-19 vaccine. After another Sinovac vaccine shot in March followed by a meningococcal vaccine injection, he was sent to hospital for two weeks for diabetic ketoacidosis, a buildup of blood acids known as ketones that can be life-threatening.

“When we went to buy blood sugar testing devices, a seller asked us in surprise: ‘Are you guys getting it for your child? Is it because of the vaccine?’ Even they had such alertness to [the issue],” she said.

China’s National Health Commission, as well as its provincial branches for Zhejiang, Henan, and Fujian cannot be reached over the phone for comments. The Epoch Times has reached out to Sinovac, Sinopharm, and Chongqing Zhifei Biological Products Co., the parent company of Anhui Zhifei Longcom Biopharmaceutical, over the parents’ allegations.