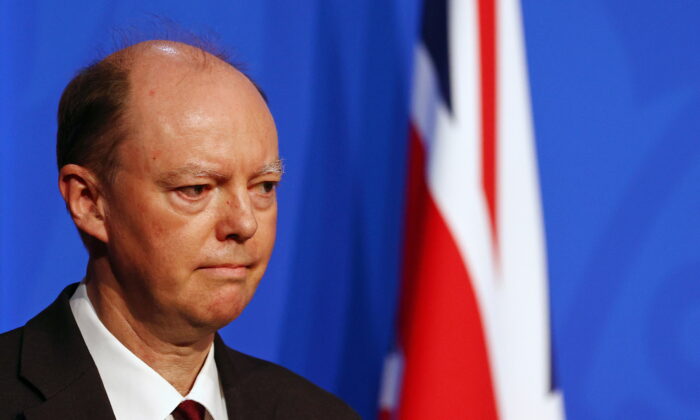 Chief medical officer for England Professor Chris Whitty is due to brief the Prime Minister. (Adrian Dennis/PA)
By Dan Warren

A report produced by the most senior medical advisors in the UK says the country will face a “prolonged period” of deaths because of the COVID-19 pandemic, however the deaths will not be caused by the virus itself.

According to the report co-authored by England’s chief medical Officer Sir Chris Whitty as well as Sir Patrick Vallance, the country’s Chief Scientific Adviser, the UK is facing an excess death toll from heart diseases and cancer due to people following government pleas to protect the NHS.

Whilst hospitals around the country were tackling the pandemic with full force, thousands of routine treatments and appointments were delayed causing the knock-on effect that the country is now seeing.

The report which claims not to be the “definitive narrative” on the pandemic lays out COVID-19 policy and evaluates the implications in several areas including how the health system changed during the pandemic.

Once the country went into lockdown mode, GP appointments went from face to face, to a remote setup via video or telephone call. Whilst this could cater to some patients, the report admits there were “limits” to how far the virtual appointments could support the public.

However, the report did state that “in many cases the balance of risks and benefits still favoured remote support.”

The report summarised the idea that switching appointments to a remote setting, along with asking those who were experiencing COVID-19 symptoms to avoid health care settings, would reduce transmission of the virus as well as remove additional burdens during a time when the system was under pressure. However, many patients say even though the worst of the pandemic appears to be in the past, getting a face-to-face appointment with a GP is becoming increasingly challenging.

The report stated that whilst emergency care was “open for business,” fewer people visited A&E departments in hospitals. It also concluded that the delays in patients seeking medical advice along with the cancellation of surgeries and screenings would have “led to later and more severe” non-COVID illness.

In November, a British Heart Foundation analyst reported that since the start of the pandemic, deaths involving heart disease exceeded 30,000, which equated to over 230 additional deaths a week above the expected rate for heart disease. The foundation stated that whilst COVID-19 was a prominent factor in excess heart disease-related deaths during the first year of the pandemic, the situation has since changed.

The report blamed excess deaths on “significant and widespread” disruption to services to provide care for heart patients.

At the time, the foundation’s Chief Executive Dr. Charmaine Griffiths called the ongoing disruption “devastating” and highlighted that many people are unaware they have a condition that increases the risk of early death because of a heart attack or stroke.  Griffiths told the government “There isn’t a moment to lose” and that “a heart strategy must be at the top of the agenda to prevent more heartbreak and needless loss of life.”

The comments from the British Heart Foundation came at the same time when medical experts and cancer charities called for government action after a report from the Office for Health Improvement and Disparities concluded that since the start of September 2022, there had been almost 900 more cancer-related deaths than what would be expected for the time of year.

The report from Britain’s top advisers puts Health Secretary Steve Barclay under further pressure. Barclay, who was only appointed on Oct. 25, faces a national shortage of GPs as well as strikes from nurses and paramedics at a time when the service is already under immense strain due to winter-related factors.

The report which was published by the Department of Health and Social Care was written for future Medical Officers of all four nations facing a new pandemic. Currently, an independent inquiry over the UK’s handling of the pandemic is taking place, it’s expected to conclude at some point in 2023.