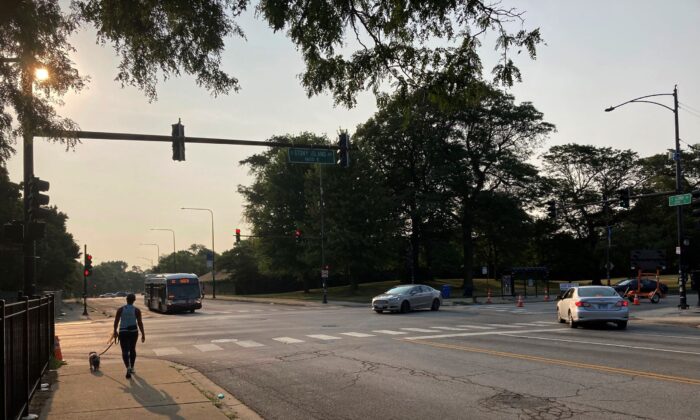 A pedestrian walks with a dog at the intersection of South Stony Island Avenue and East 63rd Street where the ShotSpotter technology is in use above the crossroads in Chicago on Aug. 10, 2021. (Charles Rex Arbogast/AP Photo)
Illinois

CHICAGO—Only 9 percent of ShotSpotter alerts responded to by Chicago police officers led to evidence of gun crimes, according to an August report by the City of Chicago’s Office of Inspector General (OIG).

The ShotSpotter system, developed by the California-based company ShotSpotter, uses acoustic sensors to detect gunshots in real-time for faster and more precise police responses. A total of 119 U.S. cities use the system, including New York, San Francisco, and Minneapolis.

Chicago—ShotSpotter’s largest customer—uses the system in 12 police districts covering more than 100 square miles, mostly on the crime-infested South and West sides. After the ShotSpotter system detects likely gunshots, the sound waves are sent to a human acoustic expert at ShotSpotter headquarters. After an expert gives approval, the City of Chicago Office of Emergency Management and Communications is notified to dispatch police officers to the scene.

Among the detected gun crimes, 36 percent were reckless firearm discharges, 34 percent were aggravated battery or assault with a handgun, and 5 percent were first-degree murders.

Chicago police officers also used aggregated ShotSpotter data to determine high-crime areas for targeted patrol. The OIG found that Chicago officers conducted 1,366 investigatory stops based on the general volume of ShotSpotter alerts in a given area during the period examined.

In one instance, two Chicago police officers patrolling an area with a high volume of ShotSpotter alerts on the South Side of Chicago found a suspect who looked in their direction, grabbed his waistband, and fled. The two officers chased the suspect, apprehended him, and retrieved an illegal firearm.

The value of ShotSpotter is a question of relative cost and benefit, the OIG report says. Though there’s a law enforcement benefit of responding quickly to crime scenes, there’s also the costs of money; the time and attention of Chicago police officers; and the risk of poor police judgment based on little contextual information. The system costs the city $11 million per year.

The OIG determined that, based on available data, ShotSpotter hasn’t yet shown its law enforcement value.

“It is important to point out that the Chicago Police Department continually describes ShotSpotter as a critical part of their operations,” a ShotSpotter representative said in a statement sent to The Epoch Times.

“The OIG report does not negatively reflect on ShotSpotter’s accuracy, which has been independently audited at 97 percent based on feedback from more than 120 customers. Nor does the OIG propose that ShotSpotter alerts are not indicative of actual gunfire whether or not physical evidence is recovered.

“We would defer to the Chicago Police Department to respond to the value the department gets from being able to precisely respond to criminal incidents of gunfire. We work very closely with our agency customers to ensure they get maximum value out of our service.”

Chicago began contracting with ShotSpotter in August 2018. The current contract runs through August 2023.