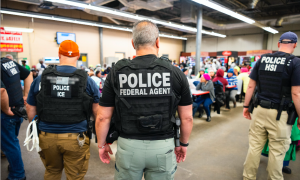 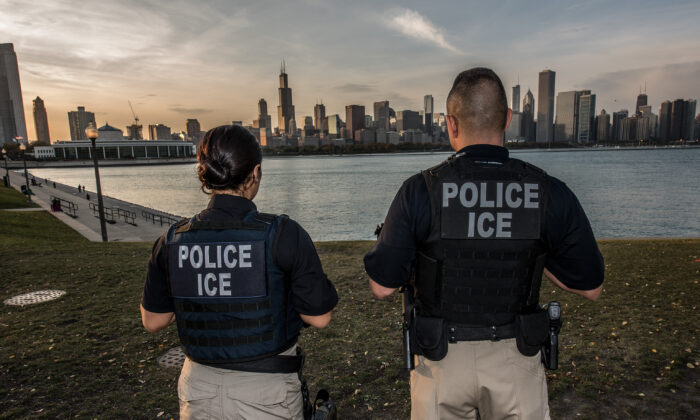 ICE agents in Chicago, Ill., in this file photo. (Josh Denmark/DHS)
US News

Chicago area jails released 1,070 inmates who were in the country illegally in fiscal 2019, according to Immigration and Customs Enforcement (ICE).

ICE said it had requested, via an immigration detainer, that Cook County jail in Illinois notify the agency when the aliens were to be released. However, the detainers were ignored and the inmates were let out.

“The most concerning issue about working in an area that refuses to cooperate with ICE is not only that we do not know which criminal aliens are being released from custody, but the public doesn’t know either,” Henry Lucero, ICE’s acting deputy executive associate director for Enforcement and Removal Operations, said in a statement on Jan. 10.

ICE provided the example of Rasheed Abass, a 50-year-old South African national, who was arrested in June for indecent exposure. In July, he was arrested again, this time for assault. ICE said it lodged detainers after both arrests, but neither were honored, and Abass’s current whereabouts are unknown.

In July 2019, Chicago Mayor Lori Lightfoot said Chicago police “will not team up with ICE to detain any resident.”

“We have also cut off ICE from any access from any CPD databases, and that will remain permanent,” Lightfoot said.

Lucero said not having access to standard Illinois law enforcement databases makes it impossible to accurately tell how many illegal aliens have been arrested, released, and then committed additional crimes.

“However, with the limited information ICE can verify, we know that police resources are being wasted, more people are being victimized, and it’s a matter of time until something more significant happens,” he said.

ICE placed a detainer on a 22-year-old from Lithuania on Dec. 3, 2018, following his arrest for attempted murder, aggravated battery of a victim over the age of 60, and aggravated battery in a public place. The man, Rokas Ablacinskas, was released on Sept. 17, 2019, and remains at large.

Following a press conference by ICE in Chicago last week, where it was announced that arrests of illegal aliens are down in the city, Lightfoot wrote on Twitter: “Not sorry. I will never apologize for protecting immigrants and refugee families in Chicago.”

However, ICE says it only lodges detainers on individuals who have been arrested on criminal charges and who ICE has probable cause to believe are removable aliens. The agency says regions that forbid ICE into jails to pick up aliens are forcing ICE to operate out in the community more, which results in officers arresting other illegal aliens who may not have been on their radar.

Last October, at the annual conference of the International Association of Chiefs of Police held in Chicago, President Donald Trump criticized the city’s sanctuary policies as a “disgrace.”