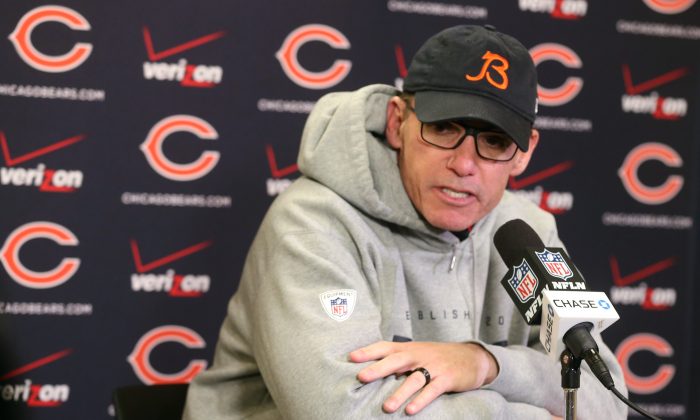 Trestman is out after going 13-19 in two seasons while Emery lasted just three years. The Bears went 5-11 in a mostly miserable season, never challenging for the NFC North lead after the first few weeks as quarterback Jay Cutler and the rest of the offense struggled mightily.

“I want to thank Virginia, George and the McCaskey family, Phil Emery and Ted Phillips for giving me the opportunity to be the head coach of the Chicago Bears,” Trestman said in a statement released by the team. “I also want to thank all the coaches and players who gave us everything we asked over the past two years. I have tremendous respect for this organization.”

This was certainly not what the Bears envisioned with a prolific offense returning intact and a rebuilt defense in tow. But little went right for Chicago this season.

There were distractions throughout the year, whether it was linebacker Lance Briggs being allowed to miss practice to open a restaurant in California the week of the opener or offensive coordinator Aaron Kromer admitting he was the NFL Network’s source behind a critical report of Cutler late in the season.

Trestman, who was hired to get the most out of Cutler, decided the team needed a spark even with the Bears out of contention, so he benched the highly paid quarterback in favor of Jimmy Clausen for the second-to-last game of the season against Detroit. Cutler wound up starting the final game after Clausen suffered a concussion against the Lions, adding another chapter to a season-long soap opera.

Trestman also surprised some by allowing star receiver Brandon Marshall to fly to New York on a weekly basis to record Showtime’s “Inside the NFL.” Marshall, who is open about his struggles with borderline personality disorder, had an off year and at one point gave a rambling news conference over past allegations of domestic abuse. He also challenged a Detroit fan on Twitter to a boxing match for charity, and reporters standing in the hallway overheard him screaming in the locker room after a loss to Miami at Soldier Field in October that raised all sorts of questions about where the team was headed.

The answers came right after that.

The Bears joined the 1923 Rochester Jeffersons as the only teams to give up 50 or more points in back-to-back games while dropping the next two at New England and Green Bay. Trestman’s meek response after defensive end Lamarr Houston suffered a season-ending knee injury celebrating a late sack against the Patriots — “I’m disappointed for Lamarr,” he said twice — only fueled doubts about his leadership.

In recent weeks, it was clear changes were coming. The question was how far up the ladder they would go.

Emery, who replaced the fired Jerry Angelo, was hired with the mandate that he work with former coach Lovie Smith for at least one season. He fired Smith after the Bears missed the playoffs despite a 10-6 record in 2012, ending a nine-year run that produced three playoff appearances and a trip to the Super Bowl.

Since, then, the team has been in decline.

The decision to hire Trestman, who led the CFL’s Montreal Alouettes to two championships in five years but had never been a head coach in the NFL, backfired. Along with the distractions, there was a huge regression by the offense this season. Chicago went from second in scoring to 23rd this year despite having all its starters back, and the fact that the man Trestman beat out for the job, Bruce Arians, is rolling along with the Arizona Cardinals does not make the hiring look any better.

Giving Cutler a big contract after last season when the franchise player tag was an option is looking like another miss for Emery, as is the three-year contract extension Marshall got in May. The trade that brought him from Miami before the 2012 season actually appeared to be a hit his first two years in Chicago as he was reunited with Cutler. But the drama combined with injuries that limited him and ultimately cut short his season changed the perception.

Emery had success rebuilding the offensive line before the 2013 season, drafting Kyle Long and bringing in Jermon Bushrod and Matt Slauson. But the makeover he gave the defense last offseason did not pay off. Chicago continued to rank among the league’s worst in that area under Mel Tucker, with Jared Allen struggling and fellow newcomer Houston getting injured on that ill-advised sack celebration. Only the Saints and Falcons gave up more yards per game than the Bears.

Just like his predecessor, Emery also has a spotty draft record.

He connected with Long, a two-time Pro Bowl pick, and receiver Alshon Jeffery. Cornerback Kyle Fuller has showed some promise as a rookie this year, but Shea McClellin is looking like a bust after three seasons.