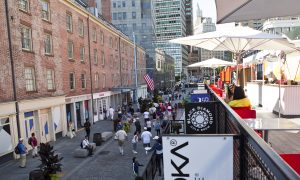 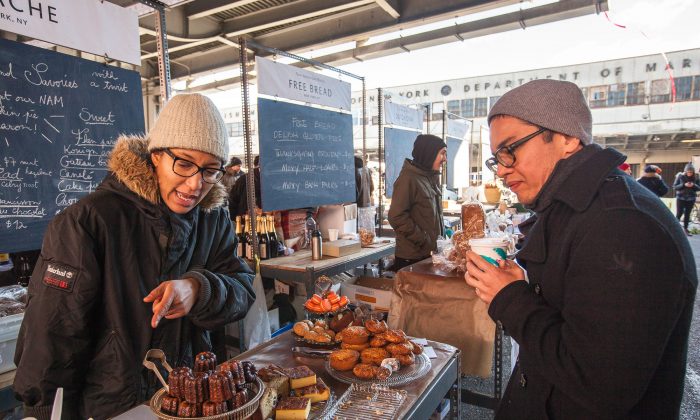 The market, which has operated in its outdoor location in front of the empty New Market Building for six seasons, is now faced with the challenge of a developer demolishing the low-rise structure to make way for a high-rise mixed-use skyscraper.

“The building itself is utterly unique in New York,” said Robert LaValva, founder and manager of the New Amsterdam Market. “It’s part of a long line of waterfront buildings that go back to the 1600s.”

Once part of the thriving Fulton Fish Market, the New Market Building is now in sad disrepair. Closed off on only three sides, its interior has been subjected to the elements for years. Its exterior is also worn and battered, with massive swaths of rust and faded metal.

At a public meeting last week, the Howard Hughes Corporation (HHC), the developer with plans for a reimagined version of New York’s last piece of maritime history, said the real problem is what the building is resting on. A series of photographs provided by HHC show deteriorated pier pilings and platform piers, adjacent to Pier 17 and supporting part of the New Market Building and the nearby Tin Building.

Chris Curry, HHC’s senior vice president of development and the lead on his company’s work at the Seaport, said that HHC’s investment includes $50 million in infrastructure costs to upgrade the area’s foundations.

“We have no obligation on the platform piers,” said Curry. HHC, which has a lease on much of Seaport through 2072, plans to make the repairs as part of other area developments that include moving and restoring the historic Tin Building, demolishing the New Market Building, and constructing a 50-story high-rise in its place.

“We’re saving the city at least $100 million,” said Curry. In addition to HHC’s future new mall on Pier 17, they plan to install new stores in the empty historic district buildings, build a new marina, and create other shopping and entertainment options.

Curry said that the key source of funding to pay for repairs and restoration is the high-rise building, which would sit almost exactly where the New Amsterdam Market now operates.

LaValva, his supporters, and other community members are in favor of saving the structure or, at the very least, creating something more in keeping with the unique character of the area.

“It’s not so much the building itself, it’s how the building relates to the district,” said LaValva, who would like the chance to help raise funds for necessary pier repairs and then rehabilitate the New Market Building into a public market. He sees such a venture as a potential local economic driver, a public asset, and an additional tourist attraction.

“It’s the unique things of the city that you want,” he said.

Many waterfront advocates and market supporters echo that sentiment.

Roland Lewis is the president and CEO of the 700-member Metropolitan Waterfront Alliance. He is also on the board of the New Amsterdam Market. His take on plans for a high-rise instead of a public market is that it lacks the type of singular character the city needs to foster.

“This is New York—this is local business and local people and its organic to our city—it’s what makes it exciting,” said Lewis on Sunday as he paused during a stroll past the market stalls. “Another high-rise will not create this kind of excitement and interest.”