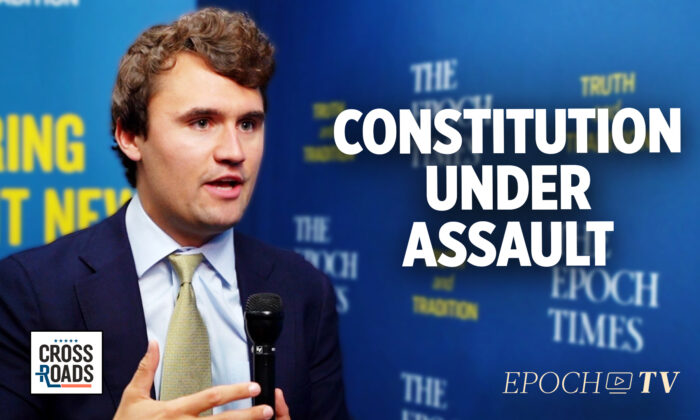 The constitutional rights of Americans are under assault from politically biased tyrants who want to use their power to restrict freedom of speech, according to Charlie Kirk, founder and president of conservative student group Turning Point USA,

Whether it’s from Big Tech and big government working together on censorship, lockdowns restricting church services, or a slew of policies whittling away other freedoms written in the Bill of Rights, the rights of Americans are under assault from nearly all directions.

In an interview with EpochTV’s “Crossroads” program, Kirk said the so-called tyrants—including private corporations—will continue to use their power to restrict the constitutional rights of Americans unless people use their political power to “actually check their power and to protect natural rights and freedoms.”

“The Constitution is the greatest political document ever written. It’s written because it recognizes how God naturally made us,” Kirk explained.

“Now, with that being said, all of a sudden, we have a simultaneous threat of private corporations that also have this threat against our freedoms and liberties, whether that be airlines, Major League Baseball, and yes, tech companies that are basically saying, ‘we have the ability to restrict your speech because we don’t like your politics.’

“This really comes down to an argument about power; constitutionalists and conservatives don’t like power.

“That’s why we have a document that we revere, that limits power and limits what power can be, what power you have, and what can be done. The problem is they are enthusiastic about using political power, they have used political power, and they will continue to unless we use political power to actually check their power and to protect natural rights and freedoms.”

While Americans may feel as if their own political power is being slowly diminished, Kirk noted that isn’t entirely true, as they actually hold the power.

“We do have political power, we keep on winning elections on the state and local level, we control more state legislators than ever before. We have plenty of governors,” the founder said.

Kirk stressed the importance of elected leaders doing more to actually represent their voters and noted that states have much more power than people realize.

Kirk also noted the importance of pushing back on the “woke” postmodern critical race theory (CRT), which has gradually proliferated in recent decades through academia, government structures, school systems, and the corporate world.

“This kind of new woke, postmodern critical race theory generation is going to destroy our country if they actually get into power,” Kirk said.

“And so we have to either convince enough leaders to be able to push back against that, or be able to turn the trajectory of our generation.

Turning point USA is working with young people across the USA every single day to help educate and train them to promote the principles of freedom, free markets, and limited government.

“We organize them, we educate them. We’re not a political organization,” Kirk explained.

“We’re an educational, cultural transformational organization that is very focused on: What are our values? Where do they come from? and How do we pass them down to the next generation? and then doing something about it. We are rising up the next generation to be able to take decisive action to save our republic.”

Kirk added that we need “bold and decisive counteraction” against what these so-called tyrants are doing if we are going to save Americans’ rights.

“If we are afraid to use political power that was given to us, the country is over,” Kirk said.

“We need to have courage, which means doing the right thing when you don’t know how it’s going to work out.

“You need to know your stuff and find truth. And if it’s not costing you right now, you’re not doing enough. Meaning that people that are really sticking their head out, they’re paying a price, and that’s what’s needed to save the country.”