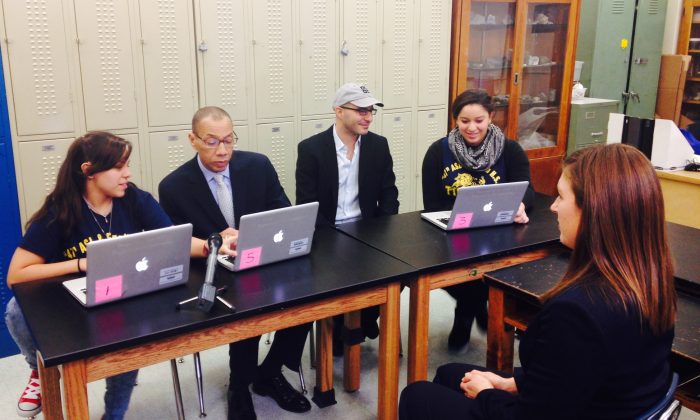 NEW YORK—In the near future, code may become the standard second language taught in city schools. On Monday, Schools Chancellor Dennis Walcott announced a $1 million investment to expand computer science instruction in city schools beginning in the fall of 2014.

The announcement was made at PS47, the American Sign Language and English Secondary School where they teach deaf, hard of hearing, and students without disabilities in the same classroom.

The expansion in computer science instruction is being implemented by a partnership consisting of the Department of Education, the New York City Economic Development Corporation, The NYC Foundation for Computer Science Education, and Code.org. The million-dollar investment is made up of both public and private funds and will be used to train 120 teachers over three years in computer science and coding.

“Today’s children, they are just so adapted to [technology] and I think we have a responsibility as educators to make sure that we train our teacher workforce to adapt to the 21st century needs of our students,” Walcott said.

Not coincidentally, the Monday that the chancellor announced the investment is the first day of the annual Computer Science Education Week from Dec. 9 to Dec. 15. The program is dedicated to showing K-12 students the importance of computer science education.

As part of this week, schools around the country are participating in Hour of Code—a one-hour introduction to computer programming that can be accessed online. Hour of Code is a new addition in this year’s Computer Science Education Week, which is organized by the nonprofit Code.org. So far 30,000 schools and 5 million students are participating.

“It’s actually a lot more fun than I thought it would be. It seems kind of intimidating, but it’s actually pretty easy,” said Alayzia Griffin, a 10th-grade student at PS47 who participated in Hour of Code.

Also as part of this year’s Computer Science Education Week, one school in each state will receive a $10,000 check if the entire student population participates in Hour of Code. PS 47 received such funding and will use it to purchase new computers for computer science classes to be launched next semester.

“[The students] are excited about the fact that we got computers and the fact that we’re being recognized as a school, and to learn about coding,” said Watfa Shama, principal of PS 47.