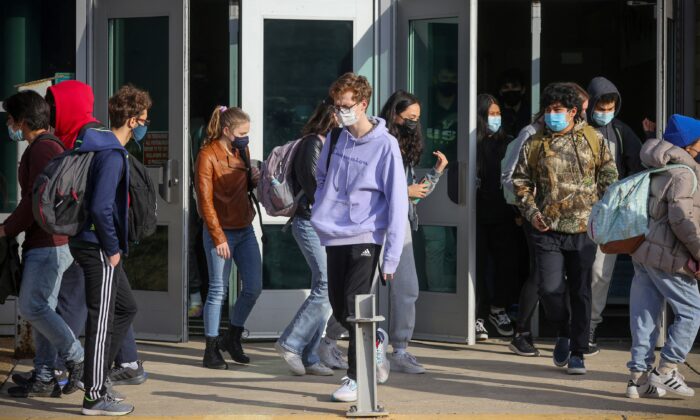 Certain schools in Virginia may impose masking requirements despite a state law and executive order that bar such mandates, a federal judge ruled on March 23.

Schools where students of parents who sued over the law and order can require masking, U.S. District Court Judge Norman Moon, a Clinton appointee, said in a five-page preliminary injunction ruling.

Together, the law “requires that schools be able to consider and afford disabled students reasonable modifications from otherwise applicable state or local laws,” Moon wrote.

Plaintiffs have demonstrated they’re likely to succeed in their lawsuit, which alleges the state measures “prevent or limit plaintiffs’ schools or school districts from considering plaintiffs’ individualized requests that some amount of masking is necessary as a ‘reasonable modification’ to that otherwise applicable Virginia law,” he said.

Virginia Gov. Glenn Youngkin, a Republican, on Feb. 16 signed the law that gives parents the right to decide whether their child wears a mask in school. Before that, he signed an order that stipulated the same requirements, amounting to a ban on mask mandates.

The parents who sued alleged the order discriminated against students with disabilities and claimed it heightened the risk that their kids would contract COVID-19 because masks help prevent transmission of the virus.

According to exhibits entered in the case, doctors have advised some of the parents not to let their children attend school if a mask mandate is not in place.

On the other hand, Acting State Health Commissioner Dr. Colin Greene noted to the court that children are at a low risk of severe illness from COVID-19. He also said mask mandates had “questionable effectiveness,” particularly after the emergence of the Omicron virus variant, and that forced masking has downsides, such as making it difficult to breathe.

Plaintiffs had sought a statewide block of the measures barring mandates, but Moon issued a targeted injunction that only applies to the schools where plaintiffs’ children attend. That is 12 schools, including Brownsville Elementary School in Albemarle County, Enon Elementary School in Chesterfield County, and Quioccasin Middle School in Henrico County.

A preliminary injunction means the block is in place temporarily and could be removed in the future or made permanent.

Christopher Seaman, a law professor at W&L Law School and one of the plaintiffs, called the ruling a victory, while Tasha Nelson, another plaintiff, said on Twitter that the order meant “we can ask [for] peer masking as a reasonable accommodation.”

Virginia Attorney General Jason Miyares, a Republican, noted in a statement that the order and law “remain in force,” quoting from the ruling.