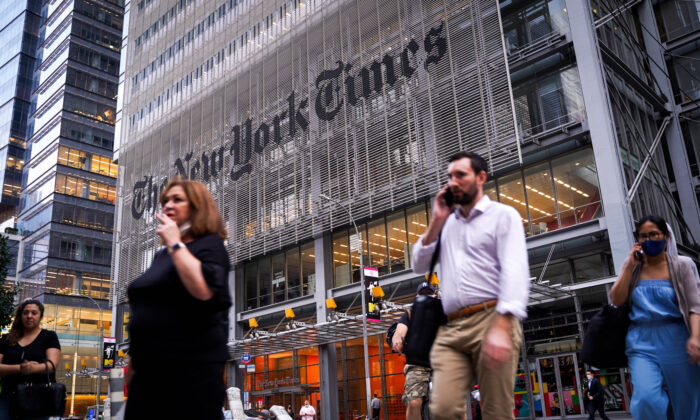 CEOs Start to Push Back Against ‘Woke’ Employee Bullying

In an indication that corporate progressivism may be reaching its high-water mark, CEOs for the first time are pushing back against activist employees, in some cases going so far as to fire them rather than steer their companies into the mire of “woke” politics.

Last week, Kraken CEO Jesse Powell became the latest executive to say he has had enough. He invited employees who felt “triggered” by controversial ideas to accept a severance package and leave the company.

The cryptocurrency technology company’s new mission statement says that it “will never ask that our employees adopt any specific political ideology as a requirement for our workplace … We recognize that hurt feelings are inevitable in a global organization that is optimizing for team outcomes above individual sentiment. The ideal Krakenite is thick-skinned and well-intentioned.”

Powell told “Fox & Friends” that of the company’s 3,000 employees, about 30 have chosen to accept the four-month severance pay and leave, citing their need to express political or social beliefs in the workplace. Comments from the remaining 99 percent of Kraken employees regarding the policy to keep politics out of the workplace were “overwhelmingly positive,” he said.

“I think everyone is ready to get back to work and stop being distracted.”

“Suddenly, nobody has any interest in this anymore, and companies are responding accordingly and starting to drop ‘woke,’” said Scott Shepard, director at the National Center for Public Policy Research. “I don’t think this is the end of woke, I don’t even think it’s the beginning of the end, but to borrow from Mr. Churchill, I do think it might be the end of the beginning.”

The employees publicly criticized Musk’s efforts as “a frequent source of distraction and embarrassment” for SpaceX. After firing those responsible, SpaceX President Gwynne Shotwell emailed employees that the efforts against Musk’s Twitter acquisition “made employees feel uncomfortable, intimidated and bullied, and/or angry because the letter pressured them to sign onto something that did not reflect their views. We have too much critical work to accomplish and no need for this kind of overreaching activism.”

The Athletic, a sports news website owned by The New York Times, told its staff this week to stick to sports and drop the political activism.

“We don’t want to stop people from having a voice and expressing themselves,” Paul Fichtenbaum, the publication’s chief content officer, said in a directive. “We just need to keep it from tipping over into the political space.”

Some employees disagreed. A staffer quickly responded in protest. “What about Black Lives Matter? Is that a social cause? Who will write about athlete protests? What about trans athletes in sports?”

Political activism can take a toll on companies, both internally and externally. Walt Disney Co. has proven to be a cautionary tale for corporate leaders. In March, CEO Bob Chapek bowed to activist employees and announced that the family entertainment company would fight to support sex education for children in elementary school, while company executives revealed the intention to add LGBT content to kids’ movies and shows.

That action sparked a backlash from conservative employees and led to parents canceling subscriptions and theme park visits.

Florida Gov. Ron DeSantis responded to Disney’s harsh criticism of a state law banning sex-ed in kindergarten through third grade by revoking the tax-advantaged status of the company’s theme park in Orlando. Meanwhile, shareholders watched with alarm as Disney stock fell from $130 per share in March to about $94 currently, a 28 percent drop that’s well in excess of the 18 percent decline in the S&P 500 over the same period.

Citibank’s pro-abortion and anti-gun advocacy also drew the attention of state lawmakers. Texas passed legislation in June 2021 that barred banks that discriminate against fossil fuel companies or gun makers from underwriting state bonds. And Texas state Rep. Briscoe Cain threatened Citibank with similar treatment in March over its policy of paying travel expenses for employees who go out of state to circumvent Texas’s anti-abortion laws. Texas is the second-largest issuer of municipal bonds in the United States. Other states such as West Virginia have passed similar laws.

In response to employee protests over controversial programs, such as comedian Dave Chappelle’s stand-up comedy show “The Closer,” Netflix told employees in May that it would no longer tolerate efforts to censor content that staff find objectionable.

“We support the artistic expression of the creators we choose to work with; we program for a diversity of audiences and tastes; and we let viewers decide what’s appropriate for them, versus having Netflix censor specific artists or voices,” the company stated. “If you’d find it hard to support our content breadth, Netflix may not be the best place for you.”

Netflix took that action after it lost 200,000 subscribers in the first quarter of this year and projected that it would lose 2 million more in the second quarter.

“It turns out that alienating the majority of your customer base is terrible for business,” Shepard said. “You can sort of get away with that when the market is reaching new highs and interest rates are nothing, so you can borrow and make up for the lack of profits.”

But in today’s environment, with markets tumbling, interest rates rising, and a potential recession looming, “suddenly the luxury of alienating your customer base doesn’t exist anymore.”

In addition to efforts at SpaceX to refocus employees toward company business, Musk is also working to revamp his target acquisition, Twitter, into a more inclusive platform. Last week, he communicated to employees that the platform must be open to all political points of view and that conversations that represent legal free speech, however offensive, should be permitted on Twitter. He’s expected, if the sale of the company goes through, to fire many of the progressive pro-censorship executives.

Many organizations, even the most progressive ones, are finding that taking up divisive racial and gender agendas is causing employees to turn on each other. Politico reported in November 2020 that “following a botched diversity meeting, a highly critical employee survey, and the resignations of two top diversity and inclusion officials, the 600,000-member National Audubon Society is confronting allegations that it maintains a culture of retaliation, fear, and antagonism toward women and people of color, according to interviews with 13 current and former staff members.”

Left-wing internet publication The Intercept lamented that the election of President Joe Biden was supposed to mark the start of a golden era for the progressive moment. Instead, “Planned Parenthood, NARAL Pro-Choice America, and other reproductive health organizations had been locked in knock-down, drag-out fights between competing factions of their organizations … It’s also true of the progressive advocacy space across the board, which has, more or less, effectively ceased to function.”

The Washington Post fired reporter Felicia Sonmez in early June for incessant public attacks on a fellow staff writer and on the paper itself, accusing them of racism and sexism. In response to Sonmez’s critical tweets, Executive Editor Sally Buzbee initially issued an advisory to all staff that “we do not tolerate colleagues attacking colleagues either face to face or online.”

When that failed to rein in Sonmez, the Post fired her for “insubordination, maligning your coworkers online and violating the Post’s standards on workplace collegiality and inclusivity.”

Companies are learning that they are often hurting their own brands and losing customers by taking up highly controversial political positions. And like Chapek, many CEOs are finding themselves unprepared for the harsh world of social-justice politics.

The executives of Coca-Cola, Delta Air Lines, Microsoft, Levi’s, and Major League Baseball chose to protest voter ID laws in Georgia, with MLB even removing its All-Star game from Atlanta. Delta CEO Ed Bastian first supported the law, then turned against it in response to left-wing threats to boycott the airline.

But few companies followed Disney into the fight over child sex education, and so far, few companies have waded into the abortion debate, despite indications that the Supreme Court could decide to overturn Roe v. Wade, sending decisions on abortion law back to state legislatures.