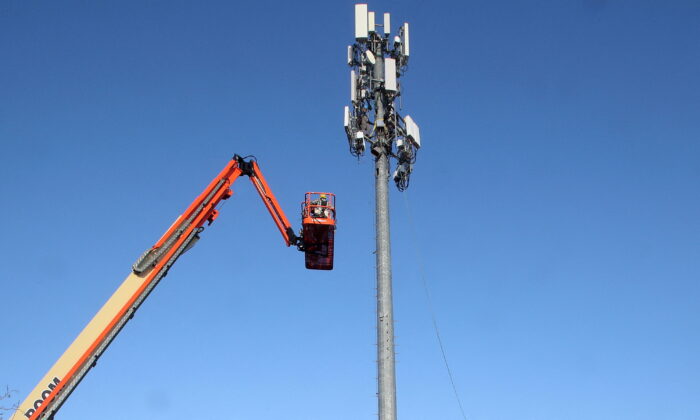 A contract crew from Verizon installs 5G telecommunications equipment on a tower in Orem, Utah, on Dec. 3, 2019. (George Frey/Reuters)
US News

CEOs of some of the major U.S. airlines on Monday warned that the nation’s commerce will essentially “grind to a halt” and there will be “significant operation disruptions” to air passengers if 5G C-band technology is not deployed in a safe manner around airports.

It comes as Verizon and AT&T are set to roll out their next-generation 5G wireless technology after numerous delays over concerns as to how the technology could affect flights.

“Despite the recent collaboration and data sharing between the telecommunications industry, the Federal Aviation Administration (FAA) and the aviation industry, commercial aviation in the United States is facing major disruption of the traveling and shipping public based on our evaluation of the data and discussions that have been ongoing to resolve the issue of how best to deploy 5G ‘C-band’ in a safe manner around U.S. airports,” the CEOs wrote.

Airline bosses requested that that 5G be implemented everywhere in the country “except within the approximate 2 miles of airport runways at affected airports as defined by the FAA on January 19, 2022.”

“This will allow 5G to be deployed while avoiding harmful impacts on the aviation industry, the traveling public, supply chain, vaccine distribution, our workforce, and the broader economy,” the CEOs said. “We further ask that the FAA immediately identify those base stations closest to key airport runways that need to be addressed to ensure safety and avoid disruption in a manner that is narrowly focused and consistent with the agreement established on January 3, 2022.

“Immediate intervention is needed to avoid significant operational disruption to air passengers, shippers, supply chain and delivery of needed medical supplies. The harm that will result from deployment on January 19 is substantially worse than we originally anticipated,” the airline bosses said.

They warned that the 5G wireless technology could effectively leave thousands of passengers grounded and leave tens of thousands more stranded overseas.

The FAA told The Epoch Times: “We recognize the economic importance of expanding 5G, and we appreciate the wireless companies working with us to protect the flying public and the country’s supply chain. The complex U.S. airspace leads the world in safety because of our high standards for aviation, and we will maintain this commitment as wireless companies deploy 5G.”

The Epoch Times has contacted Airlines for America, the group that organized the letter, for comment.

FAA and other aviation officials fear that the use of the C-band spectrum for 5G wireless services could interfere with sensitive aircraft electronics, disrupt flights, and result in some diversions.

Earlier this month, Verizon and AT&T rejected a request by Buttigieg and Dickson to delay rolling out the technology, citing safety concerns.

However, the companies reversed that decision just days later when they voluntarily agreed to delay the rollout, and offered to expand so-called “exclusion zones”around certain airports for six months, noting that similar precautionary measures were already in place in France.

The CEOs say the six-month expansion will give the FAA and aviation officials more time to study the potential for interference with aircraft operations and “remediate any altimeters that might not meet current standards.”

“Specifically, for six months, until July 5, 2022, we will adopt the same C-band radio exclusion zones that are already in use in France, with slight adaptation to reflect the modest technical differences in how C-band is being deployed in the two countries,” they said in response to the request from officials.

“That approach—which is one of the most conservative in the world—would include extensive exclusion zones around the runways at certain airports. The effect would be to further reduce C-band signal levels by at least 10 times on the runway or during the last mile of final approach and the first mile after takeoff,” the companies said.

The FAA said Sunday that it had cleared an estimated 45 percent of the U.S. commercial airplane fleet to perform low-visibility landings at many airports where 5G C-band will be deployed on Jan. 19.