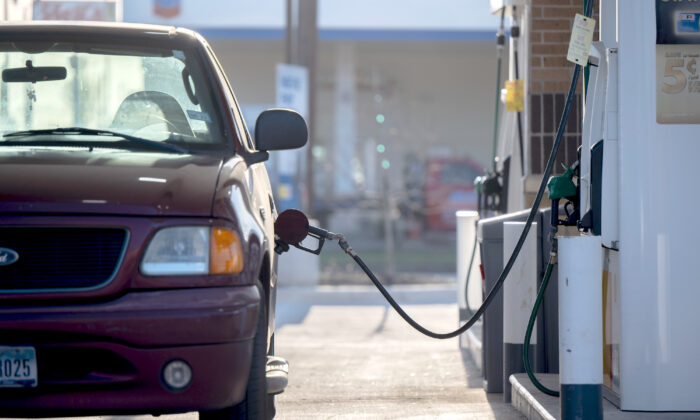 A gas pump is seen situated while pumping gas at a Shell gas station in Houston, Texas, on April 1, 2022. (Brandon Bell/Getty Images)
By Jack Phillips

An oil CEO said the White House put the United States in a “very precarious position” after another significant release of oil from U.S. reserves.

After President Biden announced an additional 15 million barrels of oil from the U.S. Strategic Petroleum Reserve (SPR) would be released to combat rising gas prices just weeks before the midterm elections, one American oil industry leader is now calling it the “strategic political reserve.”

In the coming months, the United States could again see record-high gas prices, he warned.

After receiving criticism from GOP lawmakers that he’s misusing the SPR, Biden said the release of oil is not being done for political reasons. Some Republicans and oil industry officials have alleged that the Biden administration is only releasing oil in a bid to keep gas prices relatively low before the 2022 midterms.

“It’s not politically motivated at all,” Biden said. “It’s motivated to make sure that I continue to push on what I’ve been pushing on, and that is making sure there’s enough oil that’s being pumped by the companies so that we have the ability to be able to produce enough gas that we need here at home, oil we need here at home and at the same time keep moving in a direction of providing for alternative energy.”

But in Thursday’s interview, Sommers disagreed with that assertion. Instead, he argued that the Biden administration’s policies have clamped down on U.S. oil production since he took office last year.

“We’re currently at a point where we have less federal leasing from this administration than we’ve had in any administration since World War II,” Sommers said. “We’re at record-level lows. At this point in the Obama administration, they’d done 60 leases in the offshore. So far, [Biden’s] only done six.”

This week, the White House released a fact sheet saying it would refill the SPR when oil prices fall below $72 per barrel.

“As part of its commitment to ensure replenishment of the SPR, the [Department of Energy] is finalizing a rule that will allow it to enter fixed price contracts through a competitive bid process for product delivered at a future date,” a White House statement said, while again alleging that the high gas prices are due to the Russia-Ukraine war.

Meanwhile, House Minority Leader Kevin McCarthy (R-Calif.) called for legal safeguards to prevent the SPR from being used for political purposes after the latest release of oil.

“The Strategic Petroleum Reserve was designed for an emergency time period. He’s using it trying to manipulate an election,” McCarthy said.

The stockpile, he added, should only be used after natural disasters and during times of war.

“He has just jeopardized the American people,” McCarthy said during a radio interview. “So, we’re going to have to safeguard that [so] that you cannot use that for your political gain.”

According to data from the automotive club AAA, the nationwide average price of a gallon of regular gas is $3.83, down about 8 cents from the previous week.