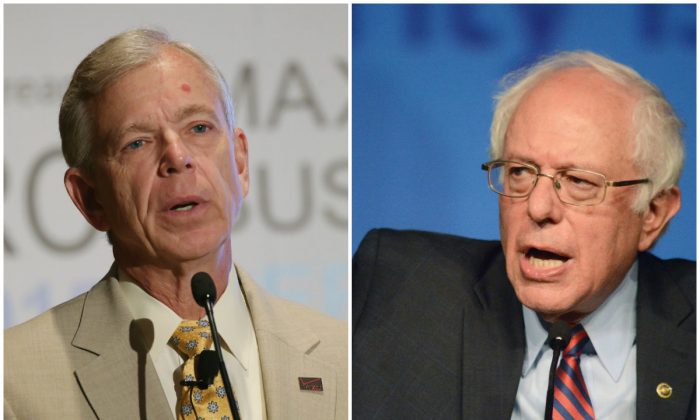 Verizon CEO Lowell McAdam took issue with Bernie Sanders putting Verizon on his list of large corporations that are “destroying the moral fabric” of America as employees at Verizon strike across the East Coast.

McAdam, in a LinkedIn post entitled “Feeling The Bern of Reality—The Facts About Verizon and The ‘Moral Economy,'” said that “the senator’s uninformed views are, in a word, contemptible.”

“His first accusation—that Verizon doesn’t pay its fair share of taxes—is just plain wrong. As our financial statements clearly show, we’ve paid more than $15.6 billion in taxes over the last two years—that’s a 35% tax rate in 2015, for anyone who’s counting.”

He continues, saying that Sanders is also wrong when he accuses Verizon of not using its profit to benefit America:

“In the last two years, Verizon has invested some $35 billion in infrastructure—virtually all of it in the U.S.—and paid out more than $16 billion in dividends to the millions of average Americans who invest in our stock.”

Sanders shot back a tweet in response: “I don’t want the support of McAdam, Immelt and their friends in the billionaire class. I welcome their contempt.”

I don’t want the support of McAdam, Immelt and their friends in the billionaire class. I welcome their contempt. https://t.co/OIiykGeHQT

McAdam’s defense of the company comes as nearly 40,000 Verizon employees across the East Coast took to the picket lines on April 13.

The strike was organized by the company’s two major unions—the Communications Workers of America and the International Brotherhood of Electrical Workers—claim that Verizon has made billions in profits, while still looking to spend less on employee benefits, reports NPR.

These workers are standing up against injustice, and I stand with them.
— Bernie Sanders

Bernie Sanders made a point of joining the picket lines himself on Flatbush Avenue in downtown Brooklyn on Wednesday.

“This is about a company that wants to take health-care benefits away from its workers, but somehow they have enough money to pay $20 million a year,” Sanders said. “These workers are standing up against injustice, and I stand with them.”

Sanders is hoping to bolster support ahead of the New York primary on April 19, picking up endorsements from local Transport Workers Union earlier on Wednesday.