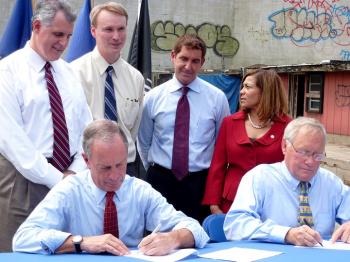 Andrea Hayley
Reporting on the business of food, food tech, and Silicon Alley. Studied the Humanities for undergrad, and obtained a Master of Arts in business journalism from Columbia University. I love covering the people, and the passion, that animates innovation in America. Email me at andrea dot hayley at epochtimes.com
View profile
Follow
biggersmaller
Print
NEW YORK—Just imagine eight Central Parks totally unused by New Yorkers. This is, unfortunately, a reality. But the good news is that these derelict land parcels within city limits, known as brownfields, are heading for cleanup and eventually productive use.

The mayor on Thursday announced that New York has become the first city in the nation to partner with the state on a regulatory framework to make it easier for developers, community groups, and the state to get thousands of brownfields cleaned up faster.

A landmark memorandum of agreement signed between the mayor and state Environmental Conservation Commissioner Pete Grannis sealed the deal on Thursday.

“Because of the landmark agreement we signed today, brownfields across the city will be cleaned up sooner, and contaminated sites that would otherwise lie fallow, definitely will be put back into productive use once again,” said Grannis.

Today’s announcement was made on a set of adjacent vacant properties located at Stillwell Avenue and Pelham Parkway South in the Bronx. One of the land parcels has been empty for 80 years. The other for four years.

Attendees were asked to imagine on the spot a future seven-story apartment building with 90 middle-income units completed in two years time and sporting the name Pelham Parkway Towers. The project is to be the first beneficiary of the New York City Brownfield Cleanup Program.

“Our new brownfields program will lead to cleanups of long blighted eyesores that drag down a neighborhood’s property values, image, and safety,” said Mayor Bloomberg.

Brownfields are polluted and often derelict spaces. They are scattered throughout the five boroughs, and put together represent a land mass eight times the size of Central Park.

Brownfields are created when land is vacated by businesses such as dry cleaners that irresponsibly dump hazardous chemicals or gas stations that leak gas into the ground.

According to a PlaNYC report, approximately 20 percent of brownfields are affected by unregulated debris and incinerator ash leftover from less stringent land development policies during the 1980s and '90s.

The city’s initiative aims to fill the gap between currently existing state run programs of a larger scale and the urgent need for development of vacant spaces that are less contaminated, and tend to languish in red tape. Applications frequently get bogged down or refused due to pollution testing complications, funding allocation, and labored regulatory avenues.

The city’s involvement, which will be run out of the mayor’s office of Environmental Remediation, will allow interest groups to access clear and safe city cleanup oversight, grant money, and long-term liability protection, which will encourage quicker and more effective development.

“Developers who act responsibly get the legal liability and protections that they have earned, and that will both improve our cities and environment, but also spur economic recovery, jobs and housing for more New Yorkers—all good things,” said Bloomberg.

Brownfields were identified as top priorities in the mayor’s PlaNYC, which lays out a comprehensive sustainability roadmap reaching into 2030.

PlaNYC outlines plans in the areas of land, water, transportation, energy, air, and climate change. Brownfields are identified as a key land resource to be improved and used to reach goals within a city where its limits cannot be expanded to accommodate growth.

“This is the first major portion of the PlaNYC agenda to be entirely completed—a big milestone toward our goal of a greener, greater New York,” said Bloomberg.