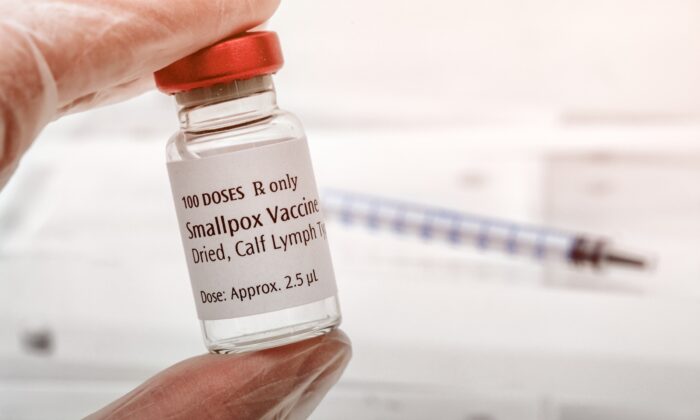 A vial of smallpox vaccine. (Marc Bruxelle/Shutterstock)
By Naveen Athrappully

The U.S. Centers for Disease Control and Prevention (CDC) is distributing vaccines to Americans who are suspected of having been exposed to the monkeypox virus.

“We want to ensure that people with high-risk exposures have rapid access to vaccines and, if they become sick, can receive appropriate treatment. To date, we’ve delivered around 1,200 vaccines … and 100 treatment courses to eight jurisdictions, and we have more to offer states,” said Dr. Raj Panjabi, White House senior director for global health security and biodefense, according to CNN.

One of the first groups to receive the vaccines was made up of health care workers in Massachusetts treating monkeypox patients.

Last week, CDC Director Dr. Rochelle Walensky said the United States had been preparing for a viral infection such as monkeypox for several decades. As such, the government has millions of vaccine doses in the strategic national stockpile.

On June 3, Dawn O’Connell, who heads the Health and Human Services office responsible for the strategic national stockpile, said the country has enough vaccines to deal with the present monkeypox infections.

Currently, the United States has two vaccines to deal with monkeypox. The first is ACAM2000, which is primarily restricted for use in military personnel because of safety risks such as blindness, fetal death, encephalitis, vaccine shedding, myocarditis, and pericarditis at a rate of 5.7 per 1,000 vaccinated, and death.

The second vaccine, Jynneos, was approved for use in 2019 and is produced by a Danish biotech company, Bavarian Nordic. The United States has ordered more than 30 million Jynneos doses since 2010, of which 28 million have expired. The vaccine doses have a three-year shelf life.

The CDC is asking health care providers to be alert for patients with rashes that are consistent with monkeypox.

There were a total of 25 confirmed monkeypox cases across the United States as of June 3. California and New York had the highest number of cases, with five patients each, followed by Florida with three, and Colorado, Illinois, and Utah with two each.

Georgia, Hawaii, Massachusetts, Pennsylvania, Virginia, and Washington each had one confirmed case, data from the CDC show.

According to the agency, early data suggest that gay and bisexual people make up most of the cases.

“Anyone can get monkeypox, and we are carefully monitoring for monkeypox that may be spreading in any population, including those who are not identifying as men who have sex with men,” Jennifer McQuiston, the CDC’s deputy director of the Division of High Consequence Pathogens and Pathology, said during a recent media briefing, according to Reuters.

More than 120 PCR tests have been conducted across the United States while monitoring the monkeypox infection. According to Panjabi, 67 labs across 46 states have the collective ability to carry out more than 1,000 tests per day.

The CDC is aware of 700 monkeypox cases across the world outside of some parts of Africa. Not a single death has been reported as of yet. The World Health Organization (WHO) isn’t recommending any mass vaccinations against the virus.

The World Council for Health (WCH), an independent nonprofit initiative, has accused the WHO of using non-scientific speculation regarding monkeypox to “justify further human rights violations.” The case definitions of monkeypox “are set up perfectly to mask” COVID-19 vaccine injury symptoms, such as the increasing prevalence of shingles following the inoculation jab, according to WCH Co-chair of the Health and Humanities Committee Robert Verkerk.

Correction: Verkerk is not the founder of the WCH. The Epoch Times regrets the error.