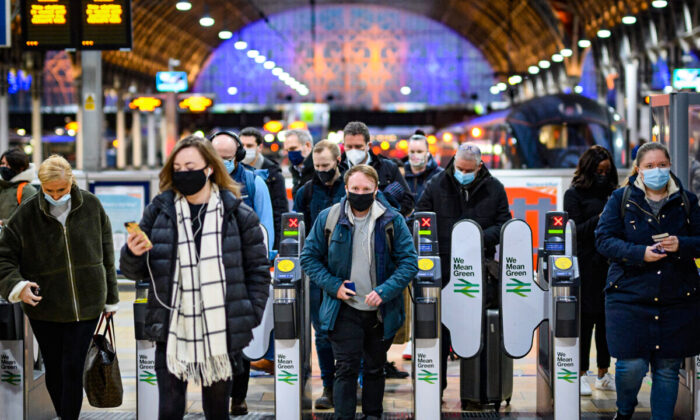 Commuters wear protective facemasks as they arrive at Paddington station in London on Nov. 30, 2021. (Leon Neal/Getty Images)
By Katabella Roberts

The Centers for Disease Control and Prevention (CDC) on Monday raised its alert level for monkeypox to level 2 and recommended that people wear masks when traveling, before appearing to make a U-turn on the advice.

In an update, the government agency raised the alert level to 2, encouraging people to practice enhanced precaution measures such as avoiding contact with visibly sick people, regularly washing hands, and wearing a face covering.

“Cases of monkeypox have been reported in Europe, North America, South America, Africa, Asia, and Australia,” the CDC wrote in its alert.

The health body on Monday cautioned travelers to avoid close contact with sick people, including those with skin or genital lesions, as well as with dead or live wild animals such as small rodents and monkeys.

Travelers were also urged to avoid eating prepared meat from wild game or using products such as creams and lotions derived from wild animals from Africa, where cases of monkeypox are mainly found.

Finally, the CDC urged travelers to wear masks, noting that doing so “can help protect you from many diseases, including monkeypox.”

However, the advice regarding mask-wearing is no longer present on the CDC website as of June 7, while the rest of the advice for travelers remains in place.

A CDC spokesperson told The Epoch Times on Tuesday: “Late yesterday CDC removed the mask recommendation from the monkeypox Travel Health Notice because it caused confusion.

Travel Health Notices inform travelers and clinicians about current health issues that impact travelers’ health, like disease outbreaks, special events or gatherings, and natural disasters, in destinations around the world. In countries where there is a current monkeypox outbreak, CDC continues to recommend masking in high-risk situations including for household contacts and healthcare workers, or for other people who may be in close contact with a person who has been confirmed with monkeypox.

CDC will continue to update recommendations as more is learned about this current outbreak.”

Monkeypox is a rare virus believed to be transmitted to humans from animals and is endemic to Central and West Africa, typically places in close proximity to tropical rainforests.

It spreads from one person to another through close contact with bodily fluids, lesions, respiratory droplets, and contaminated materials.

Scientists say the virus can cause an array of symptoms including fever, body aches, swelling of the lymph nodes, fatigue, headaches, and a bumpy rash that often occurs one to three days after the fever begins before spreading to other parts of the body. The rash can last up to a month.

As of June 6, there have been 1,019 confirmed cases of monkeypox in 29 countries around the world tied to the current outbreak, of which 30 are in the United States, according to the CDC.

Health officials have noted that a number of cases have been found among homosexual men, although the virus itself is not a sexually transmitted infection and can be caught by anyone.

Monkeypox is fatal in as many as 1 to 11 percent of people who become infected, although previous vaccination against smallpox, which is related to the monkeypox virus, may provide protection.

In May, pharmaceutical and biotechnology company Moderna announced it is testing potential vaccines against monkeypox in pre-clinical trials as part of its commitment to advancing programs by 2025 against pathogens that pose a threat to public health.

Update: This article has been updated with a statement from the CDC.