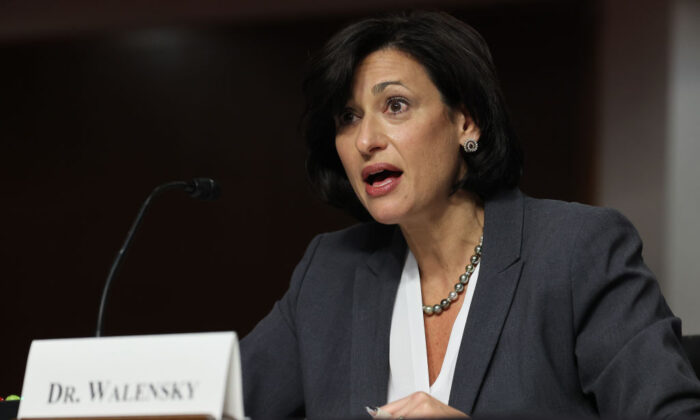 Centers for Disease Control and Prevention Director Rochelle Walensky testifies before the Senate Health, Education, Labor, and Pensions Committee about the ongoing response to the COVID-19 pandemic in the Dirksen Senate Office Building on Capitol Hill on Nov. 4, 2021. (Chip Somodevilla/Getty Images)
Executive Branch

No deaths yet associated with the disease
By Meiling Lee

Centers for Disease Control and Prevention (CDC) Director Rochelle Walensky says that the virus that causes Monkeypox is not airborne.

“What I can say is that monkeypox is not thought to linger in the air as we think about the definition of airborne transmission,” Walensky told reporters in a briefing on June 10. “When we consider airborne transmission at the CDC, we’re talking about small viral particles that become suspended in the air and can stay there for long periods of time.”

Walensky says the disease is spread mainly through face-to-face or skin-to-skin contact with bodily fluids or sores of an infected person.

The New York Times reported that the Monkeypox virus can be transmitted through aerosols—tiny airborne particles that can be suspended in the air for minutes to hours and travel long distances—like SARS-CoV-2, the virus that causes COVID-19.

A debate on whether SARS-CoV-2 could spread through the air occurred early during the pandemic as evidence emerged that aerosol transmission may be the main route of COVID-19. However, the CDC did not acknowledge that until May 2021.

The White House in a March 2022 blog post titled, “Let’s Clear the Air on COVID,” for the first time, acknowledged that SARS-CoV-2 was mainly spread through aerosols, and thus advocated for enhanced ventilation systems and respirator use but stopped short of concluding that cloth and surgical masks are ineffective in reducing the spread of COVID-19.

No Deaths Currently Related to Monkeypox

The CDC said that as of June 9, more than 1,300 Monkeypox cases have been detected around the globe, of which, 45 have been identified in the United States across 15 states and the District of Columbia.

While the current outbreak surpasses the 2003 Monkeypox outbreak in the United States, where 47 confirmed and probable cases were reported in six states, Walensky stressed that there are currently no deaths related to the disease.

“While cases have continued to increase, I want to re-emphasize that there have been no deaths yet associated with this outbreak,” Walensky said.

Jennifer McQuiston, deputy director of the CDC’s Division of High Consequence Pathogens and Pathology, said that many of the U.S. cases are from exposure to international travel.

“I think that the majority of cases in the United States, 75 percent or more are still reporting an international travel exposure that likely resulted in their Monkeypox infections,” McQuiston said.

McQuiston also added that there is no “area identified right now in the United States that seems to be having an urban outbreak like has been reported for Montreal and some other places. We don’t have one area where it looks like there’s a lot of community transmission happening.”

Symptoms of Monkeypox usually include fever, swollen glands, and body aches prior to a diffused rash appearing on the arms, hands, and face.

“But during the current outbreak, some patients have developed a localized rash often around the genital or anus before they experience any flu-like symptoms at all, and some have not even developed such flu-like symptoms,” Walensky said, adding that the rash that patients develop “may look like chickenpox, or a sexually transmitted infection such as herpes, syphilis, or lymphogranuloma of an area.”

“While the overall risk of Monkeypox in the United States public is currently low, we do want people to be aware of the signs and symptoms and to seek care right away if they think they might have Monkeypox symptoms,” said Walensky.