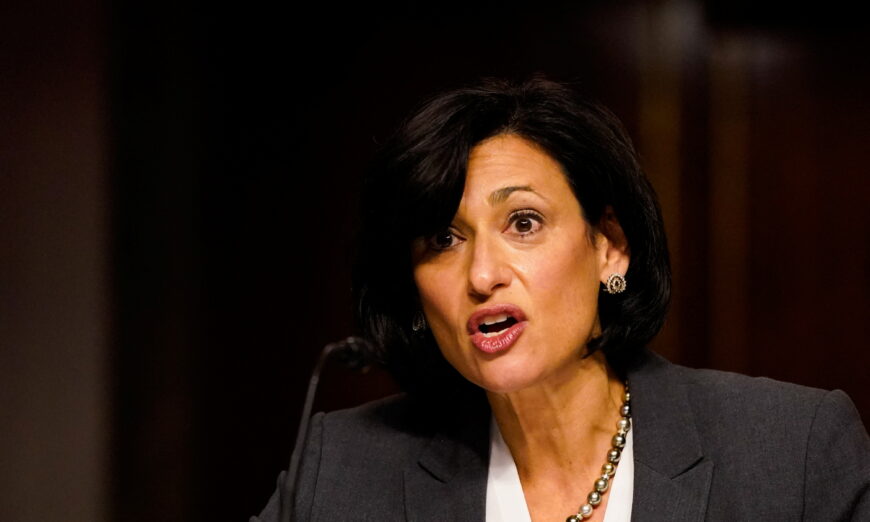 Centers for Disease Control and Prevention (CDC) Director Rochelle Walensky speaks during a hearing in Washington on Nov. 4, 2021. (Elizabeth Frantz/Reuters)

Centers for Disease Control and Prevention Director Rochelle Walensky warned that Pfizer’s COVID-19 pill Paxlovid can lead to a rebound in symptoms.

“If you take Paxlovid, you might get symptoms again,” Walensky told CBS News on Tuesday. “We haven’t yet seen anybody who has returned with symptoms needing to go to the hospital. So, generally, a milder course.”

Another researcher who is not affiliated with the CDC said that he has observed such a scenario.

“People who experience rebound are at risk of transmitting to other people, even though they’re outside what people accept as the usual window for being able to transmit,” Dr. Michael Charness of the Veterans Administration Medical Center in Boston told CNN on Tuesday.

After a patient recovers from COVID-19, the aforementioned rebound has occurred between two and eight days later, according to the CDC. The agency, however, told CBS that the benefits of taking Paxlovid outweigh the risks of COVID-19, namely among those who are at a high risk of developing severe symptoms from the virus.

About a week ago, the agency issued an alert to health care providers about the rebound, saying that patients who took Paxlovid either test positive for the virus after having tested negative or will experience COVID-19 symptoms.

“A brief return of symptoms may be part of the natural history of SARS-CoV-2 infection in some persons, independent of treatment with Paxlovid and regardless of vaccination status,” the federal health agency said at the time. SARS-CoV-2 is another name for the CCP (Chinese Communist Party) virus, which causes COVID-19.

The Epoch Times has contacted Pfizer for comment. Pfizer told CBS that it is observing a rebound rate of approximately 2 percent and is continuing to monitor patients.

“We have not seen any [COVID-19] resistance emerge to date in patients treated with Paxlovid,” a spokesperson for the company told Reuters this week.

In recent weeks, doctors have increasingly prescribed Paxlovid, which has been authorized to treat at-risk people. But some health care workers told Reuters they are putting off prescribing the medication.

“I am shying away from giving it to people who are very low- risk, and are not terribly ill, particularly people who are vaccinated and boosted,” said Dr. Bruce Farber, chief of public health and epidemiology for Northwell Health, in an interview with the news agency. He will still prescribe the pill to people who have significant health conditions or are aged 75 and older.