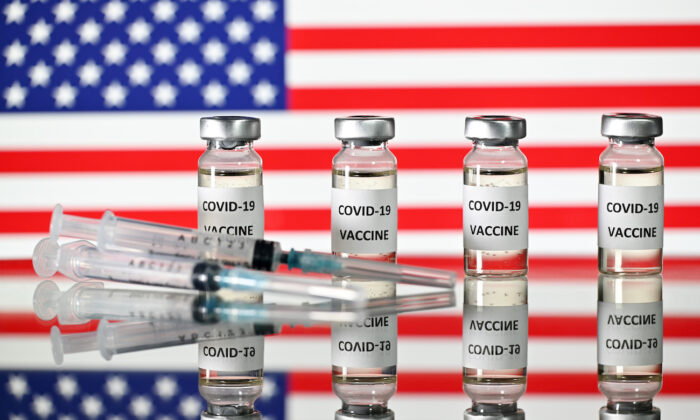 An illustration picture of COVID-19 vaccine vials with a flag of the United States. (Justin Tallis/AFP via Getty Images)
Health

The Centers for Disease Control and Prevention (CDC) recently revised its definition for vaccine and vaccination on one of its web pages, saying that the new definition is “more transparent” and can’t be misinterpreted.

“While there have been slight changes in wording over time to the definition of ‘vaccine’ on CDC’s website, those haven’t impacted the overall definition,” a CDC spokesperson told The Epoch Times via email.

“The previous definition at Immunization Basics | CDC could be interpreted to mean that vaccines are 100% effective, which has never been the case for any vaccine, so the current definition is more transparent, and also describes the ways in which vaccines can be administered.”

Earlier versions of a vaccine definition also included “immunity” in its definition.

The new definition for the vaccine now reads, “A preparation that is used to stimulate the body’s immune response against diseases,” while vaccination is “the act of introducing a vaccine into the body to produce protection from a specific disease.”

While supporters of the CDC’s revision say that it’s natural to revise the definition as the science evolves, opponents say the changes have nothing to do with the evolution of science. Rather, the CDC is making the revision in response to the current COVID-19 vaccines being less effective against the Delta variant.

Emmy Award-winning investigative reporter and Epoch Times contributor Sharyl Attkisson said the new definition was made to “meet the declining ability of some of today’s ‘vaccines,’ including the COVID-19 vaccine,” adding that “after the COVID-19 vaccines were introduced, and it was discovered they do not necessarily ‘prevent disease’ or ‘provide immunity,’ CDC altered the definition of vaccines again to say that they merely ‘produce protection.’”

Rep. Thomas Massie (R-Ky.) took to Twitter about the CDC’s definition change and compared it to George Orwell’s “1984,” writing, “They’ve been busy at the Ministry of Truth.”

Check out @CDCgov’s evolving definition of “vaccination.” They’ve been busy at the Ministry of Truth: pic.twitter.com/4k2xf8rvsL

The definition of herd immunity was also changed by the WHO in January to remove natural infection as a source.

The effectiveness of the vaccines to keep people out of the hospital had dropped to between 75 percent and 95 percent, according to CDC on Aug. 30. The health agency said the largest decline occurred in the most vulnerable group, people older than 75. However, the vaccines are still effective against severe illness.

Several studies have found that the effectiveness of COVID-19 vaccines is waning. An ongoing study in the United States found that the COVID-19 vaccines’ effectiveness dropped to 66 percent from 91 percent after the Delta variant became dominant in the country. A different study said so-called breakthrough infections increased to 25 percent of all infections in Los Angeles County between May 1 and July 25.

Israel, with the highest vaccination rates around the world, will administer a fourth dose of the Pfizer COVID-19 vaccine to its citizens after offering a third booster shot to people 12 and older in August. The country with a population of more than 9 million and with more than 5 million fully vaccinated, is experiencing the fourth wave. More than 2.7 million Israelis have received the third dose as of Sept. 8.

The CDC’s updated definition of vaccine and vaccination is the same as in the Merriam-Webster dictionary, which had revised the words earlier this year in February to include the messenger RNA vaccines.

In January, Merriam-Webster still defined a vaccine as “a preparation of killed microorganisms, living attenuated organisms, or living fully virulent organisms that are administered to produce or artificially increase immunity to a particular disease.”

The “older” definition of vaccine can still be found in other online dictionaries, including Oxford Languages.

“It’s also important to note that the modifications to the definition of ‘vaccine’ don’t change the fact that vaccines and the act of vaccination have prevented millions of illnesses and saved countless lives,” the CDC spokesperson said.