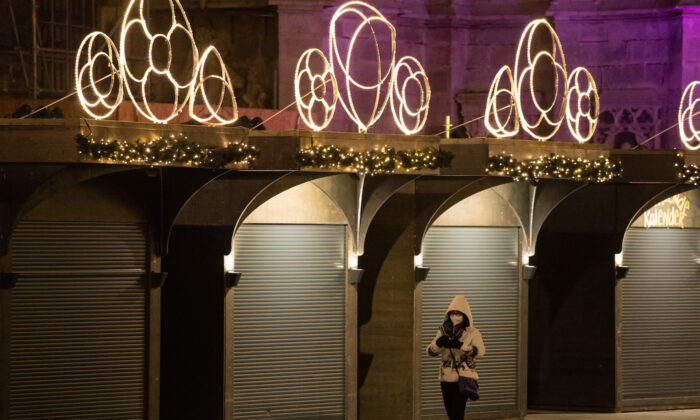 A person walks past closed Christmas market stalls on Stephansplatz on the third day of a nationwide, temporary lockdown during the fourth wave of the novel coronavirus pandemic on Nov. 24, 2021, in Vienna, Austria. (Thomas Kronsteiner/Getty Images)
WORLD

The Centers for Disease Control and Prevention (CDC) on Monday warned Americans against travel to several more European destinations, including Sweden, adding the countries to its highest-risk category for travel.

In its weekly update of COVID-19 travel advisories, Malta, Moldova, and Sweden were added to the agency’s “Level 4: Covid-19 Very High” category, which indicates more than 500 cases per 100,000 residents registered in the past 28 days.

For the European hotspots, the travel warning was raised from level three to level four or “very high.” The destinations now join neighboring countries including Austria, Belgium, Croatia, Denmark, Germany, Italy, and Portugal, in the CDC’s highest risk category.

Argentina was also raised to level 3 or “high,” the CDC said on Tuesday. The category applies to destinations that have recorded between 100 and 500 cases per 100,000 residents in the past 28 days.

In total, as of Dec. 28, almost 90 destinations were placed in the CDC’s highest risk category.

Sweden has banned non-essential travel from most countries outside the European Union and European Economic Area through Jan. 31, as it experiences a surge in COVID-19 cases.

There is a number of exemptions to the ban based on work or studies, family connections, or urgent family reasons. Vaccinated travelers from the United States may still enter Sweden after presenting a negative COVID-19 test from any country.

The CDC’s move to add Malta, Moldova, and Sweden to its level four category comes days after The World Health Organization’s (WHO) European head warned countries to prepare for a “significant surge” in COVID-19 cases as the Omicron variant of the novel coronavirus spreads.

Since it was detected by doctors in South Africa in late November, the Omicron variant has been reported in about 90 countries. It was designated as a “variant of concern” by the WHO on Nov. 26.

WHO Europe head Hans Kluge told reporters in Vienna on Dec. 21 that the highly transmissible variant had been detected in at least 38 of the 53 countries in the WHO’s European region and is dominant in several of them including Denmark, Portugal, and the United Kingdom.

“We can see another storm coming,” Kluge told a news conference. “Within weeks, Omicron will dominate in more countries of the region, pushing already stretched health systems further to the brink.”

“The sheer volume of new COVID-19 infections could lead to more hospitalizations and widespread disruption to health systems and other critical services,” he added. “Governments and authorities need to prepare our response systems for a significant surge.”

CDC officials have said they don’t yet have estimates of how many hospitalizations or deaths are due to the Omicron variant.