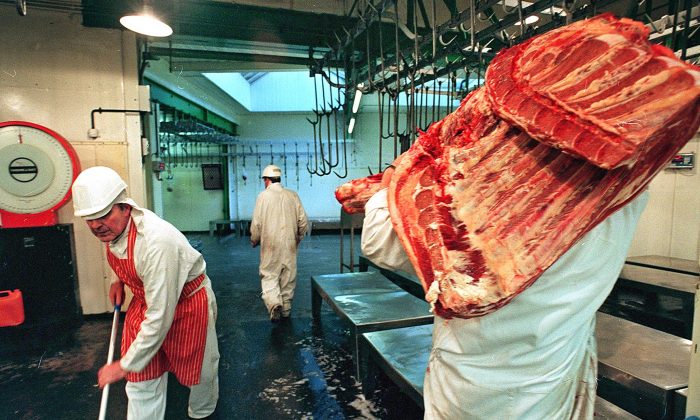 A worker lugs a carcass of beef at Smithfield market in London. The UK government is requiring abattoirs to install CCTV from spring 2018. (Sinead Lynch/AFP/Getty Images)
UK

CCTV Cameras to Be Made Compulsory in Slaughterhouses

The British government is to require slaughterhouses to install CCTV, to crack down on mistreatment of animals.

Abattoirs that are found to mistreat animals will face losing their licence or being prosecuted.

The Food Standards Agency intends to highlight cases in which animals have been badly treated, with vets having access to the last 90 days of footage.

The Department for Environment, Food and Rural Affairs (DEFRA) said that the new measures will come into force from next spring, with slaughterhouse owners given six months to comply.

A month-long consultation showed 99 percent support among the 4,000 respondents, including members of the public, industry groups, and welfare campaigners, according to DEFRA.

Environment Secretary Michael Gove said, “We have some of the highest animal welfare standards in the world and want to cement our status as a global leader by continuing to raise the bar.

“The reaction to this consultation highlights the strength of feeling among the public that all animals should be treated with the utmost respect at all stages of life and be subject to the highest possible welfare standards,” he said in a statement.

RSPCA Head of Public Affairs David Bowles said: “We applaud the Secretary of State for his steadfast and focused commitment to ensuring the highest possible animal welfare standards in the UK.

“The RSPCA looks forward to seeing the details of the proposal as issues such as where the cameras will be located, footage quality and storage, and who can have access to it are essential to making the legislation meaningful,” he said in a statement online.

“We also believe there are further ways to improve the slaughter of farm animals once the UK exits the EU, such as prohibiting electrical water-bath stunning for poultry and prohibiting slaughter without stunning.”

“Last year, the FSA Board concluded that, without mandatory CCTV in slaughterhouses, we would see minimal further progress in businesses improving animal welfare or complying with official controls to protect public health.

“We look forward to working with the industry as CCTV plans are implemented, and to seeing public confidence rise as a result,” she said in a statement.