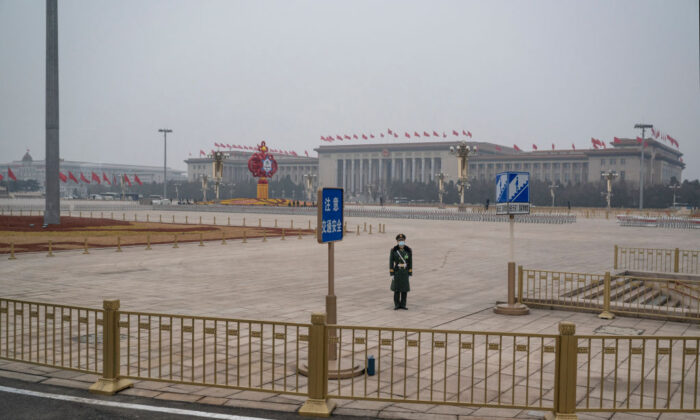 A police officer stands guard in Tiananmen Square before the closing session of the National People's Congress at the Great Hall of the People in Beijing, China, on March 11, 2022. (Kevin Frayer/Getty Images)
By Alex Wu

Experts are warning that diplomats, particularly those from the United States and Taiwan, must be prepared for the regime’s use of gray-zone tactics that threaten the norms of effective diplomacy.

John J. Tkacik Jr., a retired U.S. diplomat and director of the “Future Asia Project” at the U.S.-based think tank International Assessment and Strategy Center, highlighted in a Taipei Times article on Jan. 16 that China’s newly appointed foreign affairs minister and director of the Taiwan Affairs Office of China’s State Council both have backgrounds primarily in intelligence and not the diplomatic service.

The former Chinese ambassador to the United States turned Chinese minister of foreign affairs, Qin Gang, “graduated from Beijing’s ‘University of International Relations’ (UIR) which, as I recall from early in my diplomatic career, was a campus well-known for its affiliation with the Chinese Communist Party Center’s intelligence services,” Tkacik wrote.

Tkacik pointed out that the UIR was a unit of China’s Ministry of State Security (MSS). He cited a few American and Australian scholars and a report by the Australia Strategic Policy Institute that warned the University “is designated very high risk for its affiliation with the MSS”—China’s equivalent of both the FBI and CIA.

After graduation, Qin was assigned to work in the “Beijing Diplomatic Service Bureau” (DSB), which is run by State Security, and was dispatched to work in the Beijing bureau of United Press International.

Tkacik recalled that when he was working in the U.S. Liaison Office in Peking and the U.S. embassy and consulates around China, Chinese staff who were DSB employees all served under the direction of State Security.

“They were eager to learn all they could about our offices,” he said. “And the political and economic ‘researchers’ on our local staffs, all generously provided by the DSB, very capably and unobtrusively steered our attention to interesting developments that they believed we should report on.”

He believes “they were all commissioned MSS officers.”

After working for four years with the foreign news media in Beijing, Qin “was placed into the Ministry of Foreign Affairs under diplomatic cover,” Tkacik said. He recounted that Qin worked in the United Kingdom as a press officer and for China’s Foreign Ministry press office “where he was in close liaison with the Ministry of State Security’s DSB-supplied informants in all foreign diplomatic public affairs offices and in all foreign media bureaus in Beijing.”

In his article, Tkacik also pointed to the background and sudden rise of Song Tao, the new minister-level director of the State Council Taiwan Affairs Office.

According to the CCP’s official data, Song was a provincial communist cadre in Fujian, China’s southeastern province facing Taiwan on the Taiwan Strait.

He also cast doubt over Song’s sudden career change from a local cadre in Fujian to “counsellor of embassy” at the Chinese mission in New Delhi, and his abrupt reassignments every one or two years—as China’s ambassador in South America’s Guyana, director general of Chinese Diplomatic Missions Overseas in Beijing, and the Chinese ambassador in Manila, Philippines. Tkacik called the unusual diplomatic career track “miraculous” for someone who came from an unrelated field.

He noted that in 2015, Song was promoted to the minister-level director of the CCP’s Central International Liaison Department (ILD).

Tkacik concluded, “Comrade Song’s odd mid-career transformation (from provincial nobody to ‘international man of mystery’ in New Delhi) hints at an intelligence background. And his sure-footed rise through the ‘foreign affairs’ ranks to become ILD minister and CCP central committeeman in just 15 years confirms that he is a figure of exceptional ‘United Front’ talents.”

U.S.-based China expert Heng He told The Epoch Times on Jan. 16 that Liaison Department was for networking with the communist parties in other countries.

“After the global communist camp collapsed in the early 1990s, it expanded its liaison scope to socialist parties and transformed former communist parties in various countries. It has a strong intelligence and spy nature,” he said of the department formerly led by Song.

In light of Song’s sudden appointment, for which he was recalled from retirement, Tkacik warned that the CCP’s policies toward Taiwan “will be run by leadership cadres with intelligence and ‘active measures’ backgrounds such as Qin Gang and Song Tao.”

“Both America’s diplomats and Taiwan’s must ‘up their game’ and prepare themselves for a long campaign against China’s new gray-zone ‘special agent’ diplomacy, which has little regard for the old-fashioned diplomatics of negotiation and accommodation.”

Lai Jianping, a scholar of international law from China University of Political Science and Law, said that he believes the recent CCP’s appointments of Qin and Song are aimed at Taiwan.

As ambassador to the United States, Qin learned the varying attitudes of the American people toward the CCP’s possible military invasion of Taiwan in the future.

Meanwhile, Song’s decades in Fujian gave him a deep connection with Taiwan affairs. When he was minister of the Liaison Department, he also cultivated many pro-communist forces in Taiwan, which is “the so-called fifth column in Taiwan … traitors of Taiwan.”

“Once the CCP wants to invade Taiwan by military force, these people may be mobilized to help the CCP,” Lai said.

“The CCP relies on intelligence cadres and special agents to lead its foreign policy. The Ministry of Foreign Affairs has become an assassin in a suit, which is gangsters engaging in diplomacy. This is very deceptive for the international community. It will bring great trouble to international peace and security, especially [on] Taiwan.”

Heng said that the unusual appointments of Qin and Song indicate that the CCP’s global diplomatic focus will shift from diplomatic norms to non-normative diplomacy.

“The CCP’s diplomacy has never been conducted according to international standards, and wolf warrior diplomacy is its norm,” he said.

“It is very difficult for an ordinary local official to enter the diplomatic department. It is very likely that when Song was a local official in Fujian, because he was on the front line against Taiwan, he had already been included in this system,” Heng said of Song’s background.

“The head of the ILD, who has the functions of United Front intelligence and subversion, is in charge of Taiwan affairs, which is in line with the current increasingly aggressive Taiwan policy of the CCP.”

Ning Haizhong and Chang Chun contributed to this report.