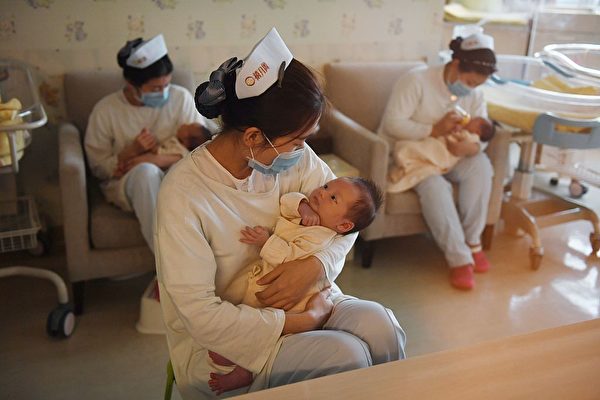 China’s population is aging and the number of births has plummeted. The Central Bank of the Chinese Communist Party (CCP) has published a paper calling for full liberalization and encouragement of childbearing.

On April 14, the CCP Central Bank published a working paper titled “Understanding and Countermeasures on Population Transition” on its official WeChat account. The paper pointed out that compared with developed countries, China is facing a more rapidly growing aging population and a more serious declining birth rate.

According to the World Health Organization (WHO), if 7 percent of the population of a society is aged 65 or above, it is called an aging society. When the proportion reaches 14 percent, it is called the Aged Society. A proportion of 20 percent is called a “super-aged society.”

China’s aging population ranks first in the world and is aging faster than European and American developed countries, according to the Central Bank’s paper.

According to the figures provided by the paper, China’s population aged 65 and above reached 88.27 million in 2000, accounting for 7 percent of the total population, making the society an aging society. In 2019, the number of people aged 65 or above rose to 176 million, accounting for 12.6 percent of the total. It is estimated that in 2022, the proportion will exceed 14 percent, making it an aged society.

The comparison shows that it only takes 22 years for China to move from an aging society to an aged society, much faster than France (140 years) and Sweden (85 years), which were the first to enter aged societies. It was also faster than the United States (72 years).

The situation of the declining birth rate is even more serious in China. From 1950 to 2019, China rapidly transformed from a high-fertility country to a low-fertility country. The combined fertility rate decreased from 6.71 to 1.70, a decrease of 5.01. In the same period, the United States, Japan, Britain, and France only decreased by 1.28, 2.08, 0.33, and 1.00 respectively.

After the paper was released, Ren Zeping, chief economist of Soochow Securities, and others published a report on China’s fertility on April 16 entitled “Aging population and declining birthrates are accelerating, full liberalization is urgent.”

The CCP implemented a population control policy in 1971, encouraging couples to have fewer children, and has strictly enforced a one-child policy since the late 1970s. Official figures from the Ministry of Health (now the National Health Commission) show that from 1971 to March 2013, 336 million abortions and 196 million sterilizations were performed in China; since the 1990s, 7 million abortions and nearly 2 million sterilizations have been performed each year.

Zhai Zhenwu, dean of the School of Sociology and Population Studies at Renmin University of China, projected in 2015 that family planning had reduced China’s population by 400 million people.

According to the Ren Zeping report, the implementation of the CCP’s comprehensive two-child policy in 2016 has not only failed to produce a rise in births but has instead resulted in a birth cliff. Although the number of births initially rose to 17.86 million in 2016, it has since fallen sharply in successive years, to 17.25 million in 2017, 15.23 million in 2018, and 14.65 million in 2019.

The number of births in 2020 has not yet been released, but data from the Ministry of Public Security shows that only 1,035,000 newborns were registered in 2020, a drop of about 15 percent from 2019. The number of newborns registered by the Ministry of Public Security in 2019 accounted for 80.5 percent of the births for the year of the Bureau of Statistics, which means that the number of births in 2020 may drop by more than 2 million compared to 2019.

Dong Yuzheng, a population expert and director of the Guangdong Institute of Population Development, said in an interview with China Business News on April 18 that according to the current trend, the annual births during the 14th Five-Year Plan period may fall below the 10 million mark. In this way, within a few years, China’s total population may experience negative growth.

China’s delay in releasing the results of last year’s seventh population census has raised questions. The CCP was scheduled to release the census results in early April, but the National Bureau of Statistics said on April 16 that the delay was due to the need to “release more and more detailed information,” but no specific date was given. One Twitter user sarcastically said, “The data is really ugly, and it takes a lot of time to change it!”

In order to increase the number of births, some deputies to the National People’s Congress proposed to implement a full liberalization of the three-child policy in 2018. Ren Zeping recently posted on Weibo that not only will the three-child policy open in the future, but there may come a policy of rewarding families with four or five children. He expects that the fertility policy will be adjusted during the 14th Five-Year Plan period, and it would be better to fully lift the restrictions on birth, and if not, to open up the third-child policy first.

According to U.S.-based current affairs commentator and China expert Li Yanming, China’s demographic dividend is disappearing, and the CCP’s latest official stance indicates that a demographic crisis is imminent, with significant implications on social, economic, and international competitiveness.

On the other hand, the CCP’s ambition for global expansion and military hegemony is becoming more and more obvious, and it is reverting to Mao Zedong’s line domestically, Li said. Therefore, it is likely that the CCP will follow Mao’s practice in the early years of its rule and implement a policy of encouraging and even forcing births for full-scale war preparation and global domination.

Before the CCP took power, former U.S. Secretary of State Acheson said that China’s population had doubled in the 18th and 19th centuries, and no Chinese government had been able to solve the food problem. In September 1949, Mao Zedong, the first leader of the CCP, argued in his article “The Bankruptcy of Historical Materialism” that “the large population of China is a very good thing. There is a way [for us] even the number multiplies a couple of times, and the way is production.”