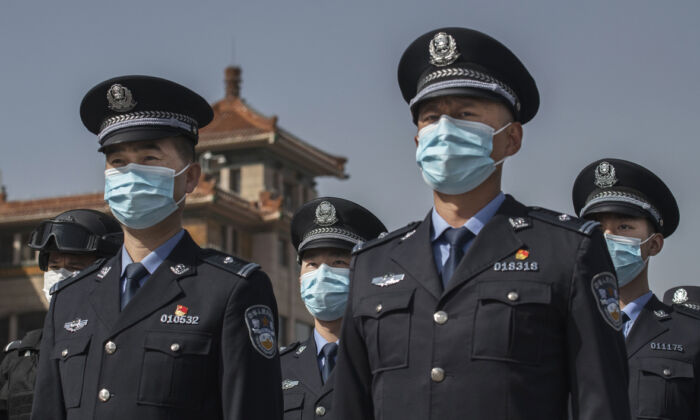 Chinese authorities have opened at least one “overseas police service station” in the United States as part of the Chinese Communist Party’s (CCP) global transnational repression, according to the human rights group Safeguard Defenders.

“These operations eschew official bilateral police and judicial cooperation and violate the international rule of law, and may violate the territorial integrity in third countries involved in setting up a parallel policing mechanism using illegal methods,” the Spain-based group said in a recent report.

An outpost in New York City was among the “first batch” of 30 overseas police service stations in 21 countries set up by the Public Security Bureau in Fuzhou, the capital city of the southern coastal province of Fujian. Other Chinese cities also set up their own outposts abroad.

The Chinese police authorities’ division in New York opened on Feb. 15, according to Dongnan News, a media outlet backed by the Fujian provincial government. The center, called Fuzhou Police Overseas Service Station, is located at 107 East Broadway, inside the headquarters of the American ChangLe Association (ACA), a nonprofit with close ties to the Chinese regime.

The total number of such stations is unclear.

“There is no complete list of such “110 Overseas” police service stations available,” the report states. “[T]he number is undoubtedly larger and such stations more widespread.”

Established in 1998, the ACA is one of the most influential communities for immigrants from Fujian Province in the United States, according to its website.

The ACA cooperated with Fuzhou’s Public Security Bureau to set up the Fuzhou police service station this year, the association’s chairman said in April during an event at the group’s office while hosting the deputy Chinese consulate general in New York, Wu Xiaoming, Dongnan News reported at the time. Wu, according to the report, recognized the association’s contribution to “promoting Sino-U.S. friendship and supporting China’s peaceful reunification.”

The New York community group, as with many purportedly grassroots Chinese organizations, is linked to the Chinese Communist Party’s sprawling “united front” system. That refers to a network of thousands of overseas groups loosely overseen by the United Front Work Department, a powerful Party agency that works to advance the regime’s interests abroad, including by carrying out foreign influence operations, suppressing dissident movements, gathering intelligence, and facilitating the transfer of technology to China.

The ACA maintains close ties to the regime and has been praised for its efforts in supporting CCP and its leaders. Photos displayed on its website include a certificate of appreciation from the Chinese consulate in New York in 2015. The consulate praised the ACA for playing an active role in organizing overseas Chinese nationals to welcome Chinese leader Xi Jinping when he traveled to New York to attend United Nations meetings at that time.

The group’s former president, Zhang Zikuo, in 2019 attended an official ceremony in Beijing to mark the 70th year of CCP rule over China as a representative of overseas Chinese nationals in the United States, according to a 2020 report by the Fuzhou City Federation of Returned Overseas Chinese.

In May 2020, Zhang, then-president of the ACA, attended an online seminar organized by the United Front Department of Fuzhou’s Changle District, during which they had an “in-depth study of the spirit of the two sessions,” the report reads. “Two sessions” refers to annual meetings held by the regime’s rubber-stamp legislature and political advisory body.

Ostensibly, the overseas police service stations serve administrative purposes, with many tasks the report said that would be “traditionally considered of a consular nature.”

For example, the New York station’s most popular service was assisting overseas Chinese in renewing driver’s licenses without having to return to the country, according to an August report by Dongnan News. The report said that from March 1 to April 27, 36 applications completed an online physical examination at the station and had their driver’s licenses renewed.

The stations make overseas Chinese feel the “care and love” of the motherland, ACA Chairman Lu Jianshun told Dongnan News. The report mentions that Lu also is a staff member at the New York station.

Safeguard Defenders, however, said such 110 overseas have a “more sinister goal, as they contribute to ‘resolutely cracking down on all kinds of illegal and criminal activities involving overseas Chinese.’” Some of the stations have already been “implicated in collaborating with Chinese police in carrying out policing operations on foreign soil,” the group said.

One example provided in the report was the successful return of a Chinese fugitive surnamed Xia, who was accused of fraud and fled to Serbia.

‘A Global Regime of Political Terror’: Beijing Forcibly Brought Back 10,000 Citizens From Overseas Since 2014, Report Says

After identifying Xia’s location in Belgrade, Chinese police authorities “successfully [got] in touch” with Xia through its overseas service station, the report stated, citing a 2019 article by Chinese state media. Police in Qingtian city then “directly carried out persuasion to return” through the Chinese social media app Wechat and video calls with the support of staff members of the overseas service. Chinese police, the report stated, educated Xia about “relevant policies, laws, and cases” at least once a week before Xia finally actively cooperated with the police to return to China in October 2018.

From April 2021 to July 2022, an estimated 230,000 overseas Chinese nationals have been “persuaded to return” to the country to face criminal charges, according to a Chinese state media report.

Safeguard Defenders noted such “persuasion to return” involves harassment and intimidation of the target’s relatives in China. If the target refuses to comply, their families could face punishment, such as their children being denied education.

“These methods allow the CCP and their security organs to circumvent normal bilateral mechanisms of police and judicial cooperation, thereby severely undermining the international rule of law and territorial integrity of the third countries involved,” the report states.

“It leaves legal Chinese residents abroad fully exposed to extra-legal targeting by the Chinese police, with little to none of the protection theoretically ensured under both national and international law.”

Officials at the ACA, the FBI, the Department of Justice, the State Department, and the New York attorney general’s office didn’t respond by press time to a request by The Epoch Times for comment.