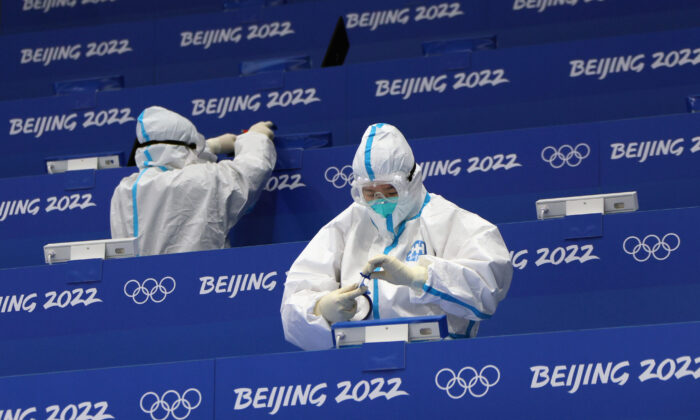 Arena workers prepare the venue for hockey games at the National Indoor Stadium leading up to the 2022 Beijing Winter Olympic Games in Beijing, China, on Jan. 29, 2022. (Photo by Bruce Bennett/Getty Images)
Infiltrating the West

Dorothy Li
Dorothy Li is a reporter for The Epoch Times based in Europe.
View profile
Follow
and Joshua Philipp

Sealed from the rest of Beijing in a “closed-loop” bubble, over 200 American athletes are receiving daily COVID screening for the Winter Olympics. But some experts worry that U.S. Olympians’ DNA might be collected by the Chinese Communist Party (CCP).

“They [CCP] are doing the testing every day … and [there’s] absolutely no oversight over the use of the products that they’re getting,” Adams said during a Jan. 26 webinar on EpochTV’s “Unmasking Communist China” program.

In the online event, Stephen Yates, chief executive of consultancy firm DC International Advisory, spoke of the threat posed by the Chinese regime’s mass collection of personal information and health data. U.S. officials and experts have previously sounded the alarm that Beijing is amassing a large database that includes Americans’ personal and health information, which could be used to enhance artificial intelligence systems and fields of medicine, as well as assist in espionage and military operations.

The danger, Yates said, lies in the CCP using the mass data set for unethical purposes.

“China has weaponized artificial intelligence and a lot of other studies of the human process in ways that civilized countries wouldn’t even allow, so we don’t have any way to really know what this dark window of the future might be,” he said.

According to Yates, CCP may use the massive data set to give their athletes a competitive advantage or increase opportunities for psychological warfare.

The Winter Olympics is set to open in Beijing on Feb 4. The diplomatic boycotts announced by the United States and a spate of other countries, which is meant to hold the communist regime accountable for its human rights violations in Xinjiang, don’t keep athletes from competing at the Games.

The U.S. athletes arrived in Beijing on the evening of Jan. 28, and were sent straight to hotels situated in a closed-loop system surrounded by wire fences. Everyone in the bubble can only leave via special vehicles, and staff in full protective suits carry out mouth swabs on them every day.

In the online event, Adams suggested that the CCP may “get rid of an American who’s the likely winner of the gold” through what she described as “nefarious means using false positive COVID test.”

Beijing’s Olympic organizers on Jan. 29 denied reports that they may potentially manipulate COVID test results, saying that the tests are up to international standards, according to state media China Daily.

Adams said that “at the end of the day, it’s all being done by the Chinese government, and nobody really knows what’s going to happen to the data.”

She noted the problem is “nobody trusts the Chinese government.”

The CCP’s known record of cyber espionage has led several countries, including the United States, UK, and Canada to tell their athletes to bring a burner phone for the Games. Cyber security experts warned that Beijing 2022, a compulsory health app for the Games, may spy on users through encryption flaws.

“I think that athletes are very, very nervous. And they’re not happy,” said Adams.