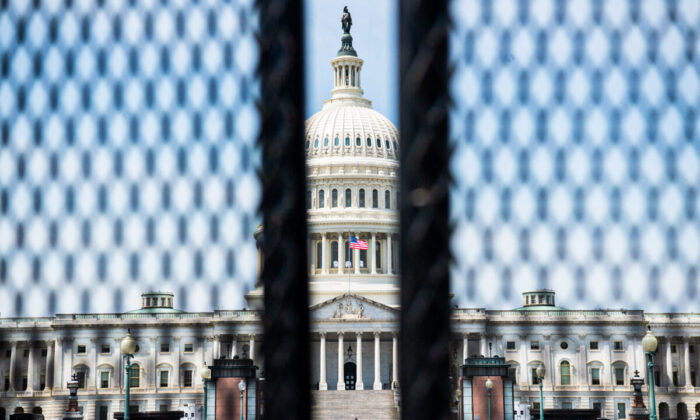 A tall security fence surrounds the US Capitol ahead of US President Joe Bidens address to a joint session of Congress in Washington, on April 28, 2021. (Saul Loeb/AFP via Getty Images)
Thinking About China

Proposed protections in the House stalled by Democrats

Members of Congress are finally pushing to remove the malign influence of foreign money from the U.S. political system.

Those funded by the adversaries of the United States—including China, North Korea, Russia, Iran, Venezuela, and Cuba—would face extra scrutiny.

Rep. Mike Johnson (R-La.) has proposed to prohibit lobbying by former members of Congress on the part of communist regimes. A group of House Republicans wants to strengthen the Foreign Agents Registration Act (FARA).

Some Democrats support these measures, but have done so quietly thus far. Josh Rogin, a journalist for the Washington Post who often writes on foreign influence issues, wrote an opinion piece published on Nov. 23, demanding that Democrats use their majority to take action on this bipartisan issue.

“Dozens of D.C. think tanks and other policy organizations take money from foreign countries and corporations without ever disclosing the details,” Rogin wrote. “The staffers who have received this financing then write policy papers and testify before Congress, posing as objective, disinterested experts.”

Banks said the proposed rules “would allow Committees to know when individuals are being paid for consulting or advising services to Chinese companies with internal CCP [Chinese Communist Party] committees or companies such as Huawei and Tencent.”

“It would also encompass witnesses who perform consulting work for oligarchs in … adversarial nations, which is often not disclosed under the Lobbying Disclosure Act [LDA] or FARA,” he said.

The lack of transparency is even worse in the Senate, which doesn’t require witnesses to divulge foreign conflicts of interest—and apparently has no plans to do so.

Think tanks that refuse foreign funding, such as the Foundation for Defense of Democracies and the American Foreign Policy Council, support additional transparency on the Hill.

Banks is leading demands for the House reform effort.

“Witnesses appearing before committees are often able to skirt disclosure requirements. … This is problematic considering [the] Chinese Communist Party’s disinformation operations in the United States include funding Washington D.C. think tanks,” he said.

“The U.S. China Security and Economic Commission has noted that a number of Washington D.C. think tanks and universities have received funding from Tung Chee-hwa, a vice chairman of the Chinese People’s Political Consultative Conference, which is a group that directs the United Front Work Department.”

The rule changes would be a step in the right direction, but even they don’t go far enough.

U.S. Air Force Academy professor Jahara Matisek, whose forthcoming book, “Old and New Battlespaces,” addresses the issue of foreign influence in the United States, said, “From a national security perspective, all foreign money (and even big corporate money) should be kept out because it skews American democracy, not to mention skewing domestic and foreign policies that benefit other countries and elites at the expense of the average American.”

The most effective lobbyists for Beijing in Washington are U.S. corporations that export to China and want the U.S. government to look the other way on certain issues—the CCP’s multiple genocides, for example—so as to not derail the gravy train of $600 billion in annual U.S.–China trade and $2.3 trillion in U.S. institutional investments in China.

“U.S. national security is not taken that seriously by either political party in the US, precisely because the incentive structures are upside down,” Matisek wrote. “No politicians seem to be punished by their electorate for [bad] national security outcomes.”

So it would seem that even the Republican proposals don’t go far enough.

The penalty for lying on disclosure forms that they’ve proposed is only a ban on speaking before the same committee for three years. Perjury is a more serious offense, especially on matters of national security. Anyone who purposefully lies to Congress should spend time in prison.

Professors at U.S. universities, which receive extensive funding from China through individual student tuition that the CCP can turn on or off, would likely be exempt under the new rules.

Politically influential professors, who can make millions of dollars in outside contracts with foreign governments, should have to report this publicly. Professors at the Harvard Kennedy School of Government aren’t required to publicly disclose foreign funding, even as they often appear as media and congressional experts on national security matters.

Greater transparency about foreign revenues should also apply to corporate experts. Everyone who’s politically influential in the United States, if they receive any foreign money, should have to disclose that funding. At risk is the future of freedom.