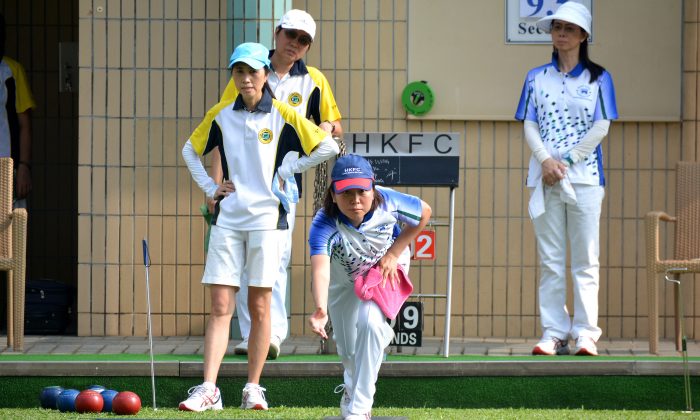 Hong Kong international Dorothy Yu (delivering) helped her Hong Kong Football Club team to victory in a crucial Premier division 1 match against the Shatin Sports Association last weekend, May 21. HKFC won the game 8-0 to maintain their pole position after the match on Saturday May 21, 2016. (Stephanie Worth)
HK Lawn Bowls

CCC Continue to Top the Table

HING KONG—Craigengower Cricket Club is on course for their first top flight trophy since 1994 after recorded the third straight victories of the season.

Last weekend, May 21, CCC continued their impressive run of the season with a convincing performance against the 2010 champion Hong Kong Police Bowling Club.

As a number of games were washed out by heavy rain occurred in the morning, CCC’s second 8-0 victory in a row allowed them to remain at the top of the league table with 23 points, 11 points more than the second-placed Hong Kong Youth Team who has played a game less.

After the game the Police team is lying third from the bottom with only two points more than the bottom club Hong Kong Cricket Club who, has a game in hand.

The Premier League continues this Saturday May 28 at all greens in Hong Kong starting at 2:30pm. On Sunday May 29, round 3 of the National Triples takes place for women (10am) and for men (3pm).