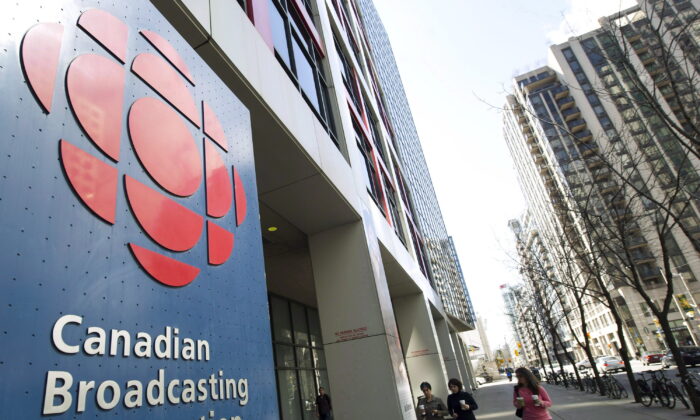 People enter the CBC building in Toronto, in a file photo. (The Canadian Press/Nathan Denette)
Canada

A veteran journalist has resigned from Canada’s public broadcaster while making her reasons for quitting public, saying CBC News embodies “the worst trends in mainstream media.”

“In a short period of time, the CBC went from being a trusted source of news to churning out clickbait that reads like a parody of the student press,” wrote Tara Henley on Jan. 3 on Substack, a web and newsletter platform increasingly popular with journalists and authors seeking greater independence.

Henley worked as a TV and radio producer at the CBC for nearly a decade, after joining the corporation in 2013. She has worked as a journalist with various news organizations for the past 20 years and published her first book in 2020, “Lean Out: A Meditation on the Madness of Modern Life.”

Henley said that to work at the CBC “in the current climate is to embrace cognitive dissonance and to abandon journalistic integrity.”

“It is to sign on, enthusiastically, to a radical political agenda that originated on Ivy League campuses in the United States and spread through American social media platforms that monetize outrage and stoke societal divisions,” she wrote, referring to radical leftist or “woke” ideologies.

“It is to pretend that the ‘woke’ worldview is near universal — even if it is far from popular with those you know, and speak to, and interview, and read. … It is to become less adversarial to government and corporations and more hostile to ordinary people with ideas that Twitter doesn’t like.”

She said the public broadcaster is failing to cover major issues of concern to Canadians while increasingly focusing on identity politics.

“It is to endlessly document microaggressions but pay little attention to evictions; to spotlight company’s political platitudes but have little interest in wages or working conditions,” Henley wrote.

“It is to allow sweeping societal changes like lockdowns, vaccine mandates, and school closures to roll out — with little debate. To see billionaires amass extraordinary wealth and bureaucrats amass enormous power — with little scrutiny. And to watch the most vulnerable among us die of drug overdoses — with little comment.”

One example of the network’s shift Henley cited was the policy that staff have to fill out a racial profile form when booking guests, and that people of certain races must be booked more than others.

“To work at the CBC now is to accept the idea that race is the most significant thing about a person, and that some races are more relevant to the public conversation than others,” she wrote about CBC’s ideological turn.

She said she went from being the person “furthest to the left” in any newsroom to now being “easily the most conservative, frequently sparking tension by questioning identity politics.”

“This happened in the span of about 18 months. My own politics did not change,” she wrote.

Conservative Party leader Erin O’Toole reacted by addressing a tweet to Henley: “Hey @TaraRHenley would love to sit down with you and hear your thoughts on how to fix the CBC. It’s time to start the conversation.”

“Even longtime CBC employees know the state broadcaster model is broken and getting worse,” he added. “I’ll start by cancelling the $675 million Trudeau increase and by reviewing its mandate for the digital age.”

Former Conservative MP and ex-Canwest Global executive Joan Crockatt also wrote on Twitter: “As a decade-long commentator on CBC and a former head of Canada’s largest media chain, I am SO proud of Tara Henley for publicly taking this leap of courage. CBC used to tell Canadian stories. Now it enforces the narrow-minded and prejudiced manipulation of [Canadians].”

The Epoch Times reached out to Henley for comment but didn’t hear back by the time of publication.

“We respectfully disagree with Ms. Henley’s perspective,” says CBC’s head of public affairs Chuck Thompson in an email statement to The Epoch Times.

“Simply stated, as the public broadcaster, CBC News covers the stories that need to be told in an ever changing Canada. It’s our responsibility and something we take very seriously.”

Thompson also said there are no racial quotas in CBC’s news content, but confirmed some programs track guest appearances in the “Content Tracking” pilot project.

“Each team aims to identify at least three aspects: gender, race/ethnicity and whether or not the subject is speaking about their race or ethnicity. We are also tracking people who have publicly identified themselves as non-binary,” wrote CBC’s editor-in-chief Brodie Fenlon in a blog post in August 2021 explaining the “Content Tracking” project, which CBC intends to make “permanent” and “consistent” across its news division.

“We are 15 months into the cultural and social revolution sparked by the murder of George Floyd,” Fenlon wrote to explain what spurred the project.

“As I’ve written before, this revolution swept news organizations the world over and resulted in some profound self-reflection about how we hire and promote, our core journalistic values and who defines them, and the stories, voices and perspectives we include — or exclude — as we cover the news.”

George Floyd, a black man, was killed by Caucasian police officer Derek Chauvin in Minneapolis in May 2020, which sparked a summer of protests and riots in the United States and had reverberations elsewhere. The event was widely portrayed in media as being race-related, though the prosecution in Chauvin’s trial said there was no evidence racism played a part. Chauvin was found guilty in April of second-degree murder, third-degree murder, and second-degree manslaughter in the case.

Henley follows an increasing list of journalists who have deserted major news organizations and found a home on Substack.

Bari Weiss, a journalist who quit the New York Times in July 2020 for similar reasons as Henley, also published her resignation letter online.

“[A] new consensus has emerged in the press, but perhaps especially at this paper: that truth isn’t a process of collective discovery, but an orthodoxy already known to an enlightened few whose job is to inform everyone else,” Weiss wrote.

“The paper of record is, more and more, the record of those living in a distant galaxy, one whose concerns are profoundly removed from the lives of most people.”

Glenn Greenwald, previously with The Guardian and now on Substack after quitting The Intercept—a media he co-founded but left claiming censorship—reacted to Henley’s departure on Twitter.

“A journalist who worked at @CBC quits after 8 years, citing the repressive environment where liberal-left ideology and woke pieties dictate ‘reporting’ and bar all dissent,” he wrote.
“She’s going to Substack to do journalism without those constraints. When will people realize the crisis?”