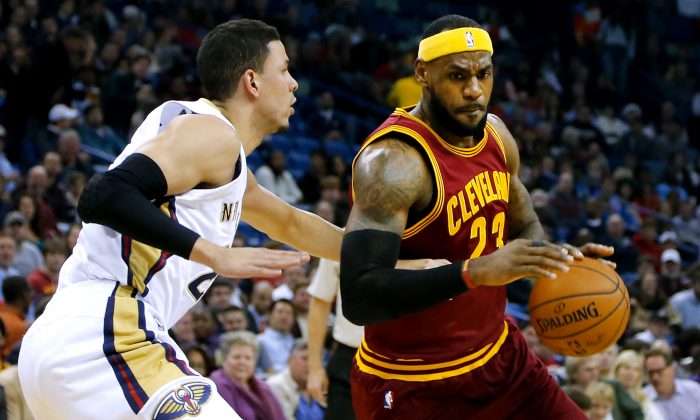 The Cleveland Cavaliers are coming off a loss but preparing for the upcoming week as the news and rumors ramp up.

LeBron Playing Too Many Minutes

LeBron James is still playing too many minutes, averaging 38.0–second in the league. He missed the recent loss to the Oklahoma City Thunder with a sore knee.

“Counting the playoffs, no one in the NBA has played more minutes than James. And you must count playoffs, because those are often the most demanding and intense minutes,” noted the Cleveland Plain Dealer.

“James has played 40,781 minutes (counting the playoffs) in his career. Consider that Larry Bird played only a total of 41,329 minutes. Magic Johnson played 40,783. Michael Jordan played 48,485. So James will pass Johnson and Bird in minutes played at some point this season.”

The outlet says coach David Blatt must resist the temptation to play James so much, although he is allowing James to take it easy in practice.

“Blatt likes to start Shawn Marion at shooting guard. Marion was signed to back up James at small forward. Well, with Matthew Dellavedova back from his knee injury, the Aussie can play some guard and allow Marion to drop down to small forward,” it added.

“There are other possibilities, especially when Mike Miller returns from his concussion. Blatt just has to do it.”

The Cleveland News-Herald noted that injuries to James or the other top players–Kyrie Irving and Kevin Love–could have huge impacts.

“The Cavaliers were lucky neither knee injury to James or Irving was serious. Losing either player would have been disastrous and could have derailed their championship hopes,” it said.

“Of course, if they keep defending like they have, there will be no championships in Cleveland this season. Blatt must identify the problems and fix them on the practice court and in the film room in a hurry.”

Dion Waiters much-publicized benching has evened out as the guard says he’s adjusted his attitude.

After floundering in the first 17 games, he and Blatt started finding common ground and he realized the importance of his sixth man role.

“I was just fighting myself, man,” Waiters told the Plain Dealer. “That’s what I was doing. I just left it alone. I’m going to make the best of it. I’ve got good people in my corner who actually care for me. I’ll be good.”

Waiters was also approached by assistant coach Phil Handy, who noted how Waiters wasn’t coming straight down on his jump shots.

Handy noticed when he did come straight down, he made more shots. Waiters corrected the problem, and has been shooting better.

“I just had to do my job, continue to keep working, [and] putting in the extra hours of work,” he said. “Staying with it and it’s paying off.”

Waiters has been averaging 19.3 points and shooting 52 percent int he last three games, and is looking to improve even more.

Waiters has been subject to trade rumors, but sources told the News-Herald that while the team wants to make a deal, Waiters’ strong play recently is moving him away from being traded.

Best of luck to my lil brother @jmanziel2 on making his 1st start today. Let’s Go!!

LeBron attended the Browns game on Sunday, which doubled as the debut for Johnny Manziel.

Blatt moved practice up Sunday so players could watch the game.

“It’s part of our city. … We’re all Browns fans and Indians fans, and Gladiator fans. We’re Cleveland fans, of course,” he told the Plain Dealer.

James said he wasn’t going to deliver any pep talks to Manziel.

“He’s got enough people talking to him right now, I don’t want to be another one,” James said. “He (needs to) just do what he’s been doing.”