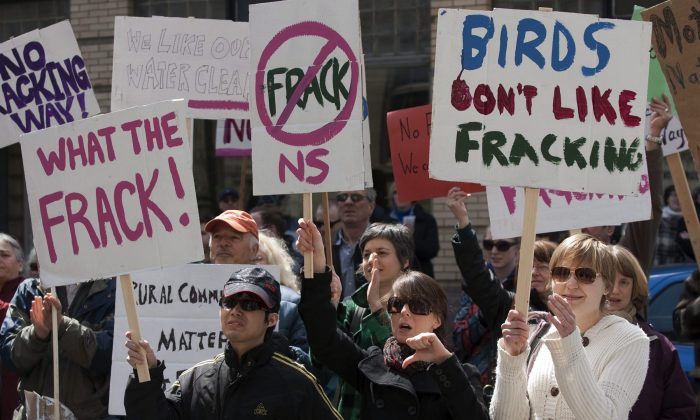 Protesters gather outside the Nova Scotia legislature in Halifax to show their opposition to the use of fracking, April 22, 2011. Dr. Frank Atherton, Nova Scotia’s deputy chief medical officer of health, says that since there are so many unknowns around fracking, it's best to proceed with caution. (The Canadian Press/Andrew Vaughan)
Canada

Caution Is Best When It Comes to Fracking, Says NS Health Official

A new discussion paper on the health concerns of hydraulic fracturing, or fracking, has reignited a discussion around the lack of available information on the practice as well as its long-term effects on human health and the environment.

Atherton said in an interview that when it comes to natural gas fracking, the precautionary principle applies.

“If we proceed, we proceed with caution to reduce risks to human health.”

Titled Hydraulic Fracturing and Public Health in Nova Scotia, the paper states that although current knowledge of fracking does not show that it “would pose a catastrophic risk to human health in the short-term and medium-term,” the long-term risks to both the environment and the health of future generations are largely unknown.

“I was asking about the implication for the thousands of wells that are being dug and if they are emitting methane,” said Atherton.

“It was the only bit I wasn’t able to pin down. It is why I made the comment: Is there a risk here that we are creating an intergenerational risk? Are we liberating a resource and helping us in the here and now, but creating a problem for the generations yet to come? It seems unknowable.”

Barb Harris, a spokesperson with Environmental Health Association of Nova Scotia, found the use of the term “catastrophic” to be problematic.

“When you pull that apart it is quite spectacular. I never knew we would allow things if they posed a catastrophic risk. I think Nova Scotians expect more than not having catastrophic risks,” she said.

“Just because we don’t have information you can’t assume everything is fine,” she adds. “Fracking is very different from a motor vehicle inspection—you know what can go wrong and what people can fix. At this point we really don’t know yet (about fracking).”

A report issued earlier this year by the Council of Canadian Academies (CCA) similarly concluded that shale gas development should take a precautionary approach. It also noted that there is a gap in knowledge of the impacts of the industry, particularly in the long term.

Prof. Rick Chalaturnyk, CMG Research Chair in Reservoir Geomechanics for Unconventional Resources at the University of Alberta, was part of the expert panel that produced the CCA report.

“The stuff you could access publicly—there was a sparsity of that data to be able to come to a conclusion or to answer questions around fracturing or groundwater,” he said.

“The issues around public health are really important to understand in a very solid manner before allowing the pace of development to move very quickly.”

New York’s state assembly voted earlier this week to ban fracking for another three years, meaning natural gas development will not be allowed in the state until 2017. Health concerns weighed heavily in the decision.