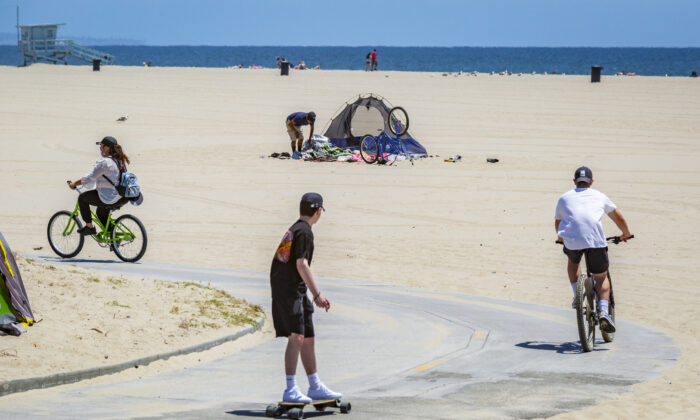 A homeless encampment in near the popular boardwalk area of Venice Beach, Calif., on June 9, 2021. (John Fredricks/The Epoch Times)
By Jack Phillips

There was a more than 50 percent spike in deaths among Los Angeles County’s homeless population during the first year of the COVID-19 pandemic, according to recently released data, which found that it was mainly driven by overdoses—not COVID-19.

Los Angeles County, which has been dominated by Democratic executives and elected officials for years, said that between April 1, 2020, and March 31, 2021, some 1,988 overall deaths among the homeless were recorded. That’s up about 56 percent from 1,271 deaths during the same time period one year earlier, said a report from the LA Department of Public Health, dated April 22.

As a result, the county concluded that drug overdoses remained the top cause of death among homeless individuals during that timeframe. Overdose deaths also increased 78 percent “from the pre- to post-pandemic onset year,” the country wrote.

There were 402 fatal overdoses in the pre-pandemic year, the country said. That “nearly doubled” to 715 in the first year of the outbreak, LA County said.

“The findings in this report reflect a true state of emergency,” said LA County First District Supervisor Hilda L. Solis said in a statement. “In a civil society, it is unacceptable for any of us to not be profoundly disturbed by the shocking needs documented in this year’s homeless mortality report.”

Heart disease was the second leading causing of death—increasing 29 percent year-over-year—and COVID-19 was the third leading cause of death, said the report. Traffic injuries and homicide were the fourth and fifth leading causes of death, respectively, during that time period, according to officials.

“The COVID-19 pandemic’s impact on people experiencing homelessness has clearly extended beyond the immediate effects of this new and deadly virus,” Los Angeles Public Health Director Barbara Ferrer said in a statement. “The pandemic has exacerbated stressors already burdening this vulnerable population.”

Los Angeles, which has favorable weather conditions, is home to the city’s notorious Skid Row district, which has been home to a significant number of homeless people for years now. Recent video footage uploaded to YouTube shows the area dominated by tents, cardboard shelters, old RVs, plywood structures, and other makeshift living quarters strewn about sidewalks and in parking spots.

A study of San Francisco homeless deaths that was released in March 2022 revealed a similar trend. There were some 331 total homeless fatalities between March 2020 and March 2021, more than twice the previous year, according to findings posted by the University of California San Francisco and the city’s Department of Public Health. They found that drug overdoses were the leading cause of death during the first pandemic year.

Meanwhile, a study released last week by the University of California-Los Angeles found that the overall quality of life in Los Angeles has dropped to its lowest levels in years.

The so-called Quality of Life Index survey dipped to an overall rating of 53 out of 100, down five points from last year, according to UCLA.