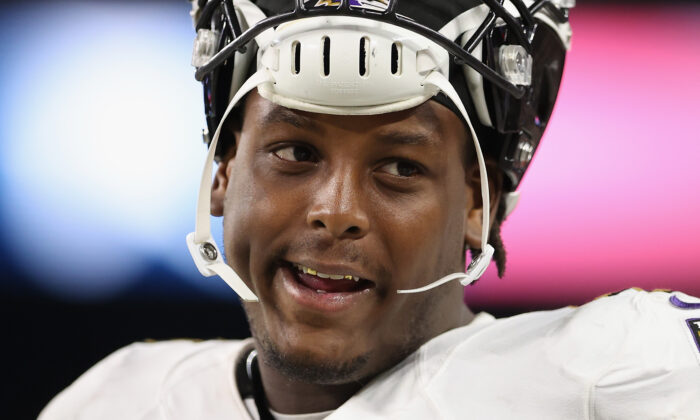 Linebacker Jaylon Ferguson #45 of the Baltimore Ravens on the sidelines during the NFL game at Allegiant Stadium in Las Vegas on Sept. 13, 2021. (Christian Petersen/Getty Images)
US News

Cause of Death Revealed for Baltimore Ravens Linebacker Jaylon Ferguson

Baltimore Ravens linebacker Jaylon Ferguson’s death was ruled an accident caused by the effects of cocaine and fentanyl, medical examiners said on Friday.

Ferguson was found unresponsive at his Baltimore home last month before he was pronounced dead at the scene, officials said at the time.

Speaking to the Baltimore Sun, Bruce Goldfarb, a spokesman for the Baltimore Office of the Chief Medical Examiner, confirmed that his death was caused by the combined effects of cocaine and fentanyl, a powerful synthetic opioid that has resulted in tens of thousands of fatal overdoses in recent years.

Goldfarb said that an autopsy report has not yet been released but said it will be released in 90 days.

Other details about his cause of death were not released by the medical examiner’s office.

Ferguson, who played in 10 games last season, died at age 26, according to family members and his agent. Initially, the Baltimore Police told local media that there was no indication of foul play or trauma, although they didn’t rule out the possibility of a drug overdose.

In a statement Friday after his cause of death was released, the Ravens told ESPN that the team is “focused on the man Jaylon was and the positive impact he made on so many as a father, son, fiancé, friend, and teammate.”

“It would be inappropriate for us to comment further while we continue to support his family and teammates, who are mourning the tragic loss of a loved one and will celebrate his life [Saturday],” it said, referring to his funeral in Louisiana.

Ferguson, who played at Louisiana Tech in college, was drafted in 2019 and played his entire career for the Ravens.

“We are profoundly saddened by the tragic passing of Jaylon Ferguson,” the Ravens after his death in June.  “He was a kind, respectful young man with a big smile and infectious personality. We express our heartfelt condolences to Jaylon’s family and friends as we mourn a life lost much too soon.”

“He was a wonderful young man full of love and life,” he said, per ESPN. “He will be remembered not just as a football player, but as a great father, son, brother, and friend. The family asks for your continued prayers.”

And the NFL also offered its condolences after his death was announced.

“We are heartbroken to hear of the tragic loss of Jaylon Ferguson,” the league said. “The NFL family sends our deepest condolences to his loved ones.”

Ferguson leaves behind three children, including two daughters and a son.