Human Smuggling Is Booming in Arizona, With Deadly Consequences 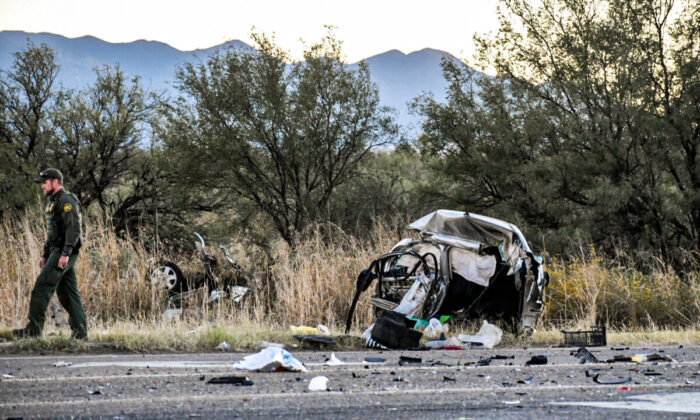 A Border Patrol agent walks from the wreckage of Wanda Sitowski’s car after a 16-year-old smuggler ran a red light at 105 miles per hour and caused a fatal crash in Cochise County, Ariz., on Oct. 30, 2021. (Zach Bennett/Sierra Vista News Network)
By Charlotte Cuthbertson

COCHISE COUNTY, Arizona—Wanda Sitoski loved holidays. Halloween, Thanksgiving, Christmas, Valentine’s Day, Easter—you name it, she had boxes of decorations for them all.

But her upcoming 65th birthday was more significant than most, as Sitoski was poised to retire, kick back, and travel.

On Oct. 30, 2021, as she drove to her favorite expensive restaurant to celebrate with her son the evening before the big day, a 16-year-old who was smuggling four illegal aliens in his car ran a red light at 105 miles per hour and killed her instantly.

“All she wanted to do was retire and drive to the Grand Canyon. She wanted to sit in peace and quiet. And a 16-year-old kid took all that away from her,” Sitoskis’s son, Edward Fritsch, told The Epoch Times.

“The day that happened, my soul was split in half.”

Cochise County in Arizona shares 83 miles of international border with Mexico. The illegal immigrants coming through the county aren’t seeking asylum—they’re doing everything they can to avoid law enforcement and get to Phoenix, according to Sheriff Mark Dannels.

“These people can’t turn themselves in, they’ll get deported. These are the bad people. We’re dealing with the worst of the worst,” he said.

Border Patrol apprehensions in the Tucson sector, which includes Cochise County, almost tripled in 2021 compared to 2020.

In fiscal year 2021, border agents apprehended more than 190,000 illegal aliens in the sector, compared to 66,000 the year before. Thousands more evaded capture.

Dannels said his office currently tracks between 900 and 1,000 smuggling vehicles in the county every month—a massive increase that began escalating at the start of President Joe Biden’s tenure.

Drivers are being paid about $1,000 per illegal alien they smuggle.

The immediate destination is usually Phoenix, which is used as a hub to travel to other cities throughout the United States.

“It’s like the cartel Uber. They just stage in public places all along the roadways waiting to get called up to go pick them up,” Dannels said.

Fritsch, sitting with an unfinished crochet blanket that Sitoski was making him—a couple of rows every day while watching “The Price Is Right”—talks about coming home to an empty house every day after his nursing shift in Tucson.

He moved from Philadelphia to Benson in 2016 to live with his parents after discovering they were struggling financially. His mother was working several jobs, but his father wasn’t working, and Fritsch could help by paying half the bills.

When his father died of cancer three years ago, Fritsch and his mother stayed in the house together and became the best of friends.

Felix Mendez, a 16-year-old U.S. citizen from Mesa, Arizona, took that away on Oct. 30, 2021. He was driving a Dodge Charger with four illegal alien passengers when a Tombstone marshal pulled him over during a traffic stop.

Two females fled the vehicle and Mendez took off with the remaining two passengers in the car, prompting the marshal to chase him.

Several minutes later, the marshal ended his pursuit “due to the risk posed to the public determined by the unsafe behavior of the individual operating the Dodge Charger,” the probable cause statement reads.

Eight miles later, Mendez hit Sitoski’s Ford Focus, shearing off the rear end of her car and sending it 118 feet from the point of impact.

Mendez and his two passengers were injured, but not seriously. Mendez sustained cuts, bruises, and a dislocated shoulder. He was released from the hospital to the county jail later that evening.

He is being charged as an adult with first-degree murder, among other charges. A 9 mm Ruger pistol was also found in the glove compartment.

Fritsch was traveling in his own car to the restaurant about five minutes ahead of Sitowski when the crash happened. He was on the phone with her at the time, but he didn’t want to believe the worst.

“There was just this huge screech, I don’t even know how to explain it. It was like when someone gets a microphone too close to the speaker—that sound. And I said, ‘Mom, something’s wrong with your phone.’

“And she didn’t answer. And I said ‘Mom are you there?’

“She didn’t answer. And then I heard cop sirens. And then her phone went dead.

“And I just thought at the time it was a bad connection and I went and waited at the restaurant.”

Two hours of waiting and 35 unanswered calls later, Fritsch headed home. There, he was met by several Benson city police officers, who gave him the news.

After they left, Fritsch got back into his car and drove to the scene of the accident. It was a shocking sight.

Cochise County Attorney Brian McIntyre said: “I will not soon forget the phone call with one of the officers—the supervisor who was on scene—because of how broken up I could tell he was. And he’s been doing this for 30 years. And this was still beyond the pale to him.”

Fritsch was kept clear of the accident scene and wasn’t able to see his mother as Homeland Security officers whisked her body away for an autopsy as part of their investigation.

“The worst part is, it was so freakin’ preventable. She didn’t make a mistake. She had the green light,” Fritsch said.

“So, for four grand, he killed my mom. Four grand. Guess what, it cost three times that amount to bury her.”

Fritsch tried to ignore his grief and turned his attention to carrying out his mother’s last wishes—to be buried in Philadelphia next to her mother, in a white casket with gold handles.

“She said to me that morning: ‘You know what, Ed, I’ve had a hard life. I worked so hard to get where I am today and tomorrow, I can retire. I’m going to go see the Grand Canyon. I’m going to travel. For the first time in my life, I’m going to live for myself,'” Fritsch recalled.

Fritsch is unsure what he’ll do next, but he plans to stay in Benson until the trial is over. The pretrial conference is set for Jan. 14 and the trial has to be wrapped up by the end of March.

If convicted, Mendez faces a sentence of life in prison with the possibility of parole or natural life, McIntyre said. As a juvenile, his sentence would be slightly lighter than an adult offender, who would get life without parole.

Arizona doesn’t have any actionable state laws against human smuggling, so Dannels’s office looks to apply any state charge to smugglers that’ll stick.

“Anytime we can charge for pursuits, reckless driving, traffic violations, trespass—we’ll charge them,” he said. He wants the state Legislature to at least pass a law allowing for the impoundment of vehicles used for smuggling.

In 2010, the state Legislature approved SB 1070 in an attempt to secure its own border after it said the federal government was failing in its duty. It included a section that made it illegal to transport, conceal, or harbor an illegal alien.

The legislation ignited a court battle, and in 2012, the Supreme Court ultimately decided in a 5–4 decision that Arizona couldn’t create state immigration offenses and expand local law enforcement’s authority over immigration law.

The state Legislature hasn’t created a standalone smuggling law since, and state and local law enforcement has been unable to prosecute human smugglers.

It’s up to the U.S. attorneys to prosecute at the federal level, but they’re not taking up most cases, especially those involving juvenile drivers, McIntyre said.

“What appears to be a policy right now is [if you have] five or fewer aliens in your vehicle, then prosecution won’t be accepted,” he said.

“If you get caught just with the five or fewer, chances are good you’re not getting arrested. Or if you get ID’d at the station, or whatever, you’re going to get released.

“And [you’re back] tomorrow, doing the same thing.”

In this case, 16-year-old Mendez turned a minor inconvenience into a potential life sentence because he fled from police—known in Arizona as felony flight—and then compounded it by killing someone, McIntyre said.

Another 16-year-old currently in the Cochise County jail is facing charges of aggravated assault with a deadly weapon/dangerous instrument after fleeing police, causing a pursuit, then crashing into two vehicles. He’s facing a minimum term of seven years for each injured individual, McIntyre said.

In the first 11 months of 2021, McIntyre’s office received 58 cases of felony flight related to human smuggling—just more than one case per week on average.

He estimates it’s at least doubled from 2020.

“The human smuggling side has never been this bad,” he said. McIntyre joined the Cochise County attorney’s office in 2009 and became the county attorney in 2015.

“When I came to the county in 2009, I’m going to guess there were maybe 10 cases [of felony flight] that year.” The felony flight cases back then were usually connected to drug smuggling or a driver with an arrest warrant, he said.

“If we don’t apply some kind of enforcement, nothing happens.”