Cargo Ship Full of Porsches, Volkswagens, Bentleys on Fire in Middle of Atlantic 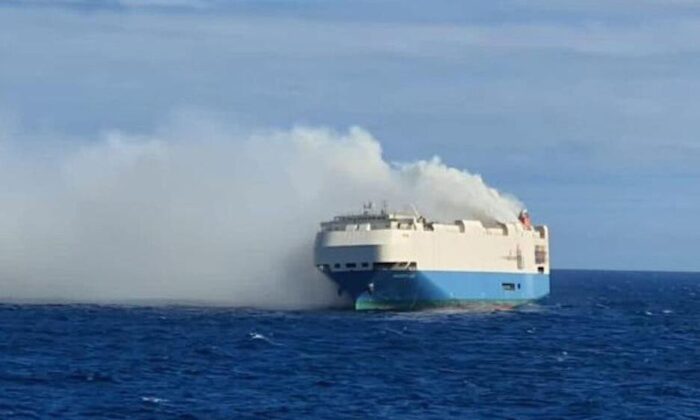 The Felicity Ace car carrier caught fire and was abandoned in the Atlantic Ocean this week. (Marinha Portuguesa)
By Jack Phillips

Possibly hundreds of Porsches, Volkswagens, Bentleys, and Lamborghinis are marooned on a burning ship in the Atlantic Ocean after the crew abandoned the vessel earlier this week.

According to the real-time data website FleetMon, which tracks ships, the Felicity Ace car carrier vessel’s ownership said that “the vessel has experienced a fire and the Master has taken the prudent decision to abandon the ship. With assistance from commercial ships and helicopter in the area, all 22 crew members have been safely evacuated from the ship.”

None of the 22 sailors were harmed, according to Portugal’s military. The Felicity Ace was on its way from Germany to the United States when the mishap occurred about 90 nautical miles southwest of the Azores Islands in the Atlantic.

According to reports from Bloomberg News, about 3,900 vehicles were on the vessel when it caught fire, including several Lamborghinis.  German outlet Handelsblatt, citing an internal email from Volkswagen USA, reported that Audis, Lamborghinis, Volkswagens, and Porsches were on board.

Porsche confirmed to CNN Friday that a number of its vehicles were among the cargo on the Felicity Ace, and customers who had cars on the vessel are being contacted. It’s not clear how many were being transported.

“While it remains too early to confirm what occurred and next steps, we are–along with our colleagues at Porsche AG–supporting our customers and our dealers as best we can to find solutions,” said Angus Fitton, a Porsche vice president, according to the report. “We are in contact with the shipping company and the details of the cars on board are now known.”

“We are aware of an incident aboard the Felicity Ace, a specialized cargo ship carrying certain Porsche vehicles,” another statement to news outlets said. “Your dealership will provide you with additional information on how this impacts you as soon as we have additional information and know the full scope of the issue.”

A Bentley spokesperson told the BBC that its vehicles were also on the ship.

“We are working with the shipping company to find out further information,” said a spokesman.

A spokesperson for Lamborghini told Car & Driver magazine that the firm is “aware of an incident involving a third-party cargo ship transporting Volkswagen Group vehicles across the Atlantic. The vessel was on its way to North America. At this time, we are not aware of any injuries. We are in contact with the shipping company to get more information about the incident.” Lamborghini has been a part of the Volkswagen Group since 1998.

Video footage uploaded online shows a helicopter crew trying to access the burning ship. Smoke is seen billowing from the vessel in the clip.

One Twitter user, Matt Farah, who operates the SmokingTire website, said that his Porsche was on the burning ship.

“I just got the call from my dealer. My car is now adrift, possibly on fire, in the middle of the ocean,” he wrote.

The Epoch Times has reached out to Volkswagen and Porsche for comment.