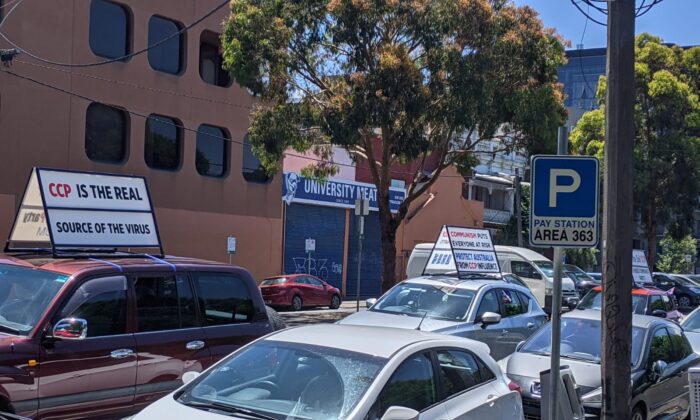 A car with the message "CCP is the real source of the virus" in Chinese and English driving through Melbourne during an End CCP car rally on Dec. 20, 2020. (Heidi Hoang/Epoch Times)
Australia

MELBOURNE—A group of mostly Chinese-Australians has held a rally of around 40 cars across Melbourne’s northwest to raise awareness about the influence of the Chinese Communist Party in Australia.

The second rally of its type held in Melbourne this year saw citizens fit their cars with banners displaying slogans stating “Protect Australia From CCP Influence,” “Communism Puts Everyone At Risk” and “The CCP Does Not Represent The Chinese People.”

The event was organised by the local branch of the Global Service Centre for Quitting the Chinese Communist Party, or Tuidang Centre.

A non-profit organisation with a mission to help Chinese people “Quit the CCP,” and share information about the true nature of communism.

Chinese-Australians showing these signs are open to being targetted by CCP agents in Australia, reported independent journalist, Morgan C Jonas who was at the car touring rally.

“They are taking a tremendous risk to voice these concerns,” he said.

Rally goer, Armstrong said raising awareness “means a lot” to him as friends of his have been persecuted by the Chinese regime just for practising their spiritual belief Falun Gong, also known as Falun Dafa.

Followers of the peaceful practice have been persecuted by the CCP since 1999, in a brutal persecution where practitioners are tortured to try and make them give up their belief in practising Truthfulness, Compassion and Tolerance. They have also been subject to organ harvesting and slavery by the CCP.

Armstrong believed it was essential to hold the rally to raise awareness because he said currently the CCP influence is starting to trickle out into other countries in the world. He added, CCP influence is “affecting everyone by a lesser or greater extent whether you know it or not.

“This is a power grab,” he said. “They [CCP] want to take control over the whole world right, basically, and once you get to that level of power, you just want more.”

Read More
Communism, China, and the ‘Quit the Party’ Movement

End the CCP rallies have been held in various cities across the globe since 2005. As of Dec. 21, around 367,000 people have signed the petition, and nearly 370 million Chinese people have quit the CCP and its affiliated organisations.