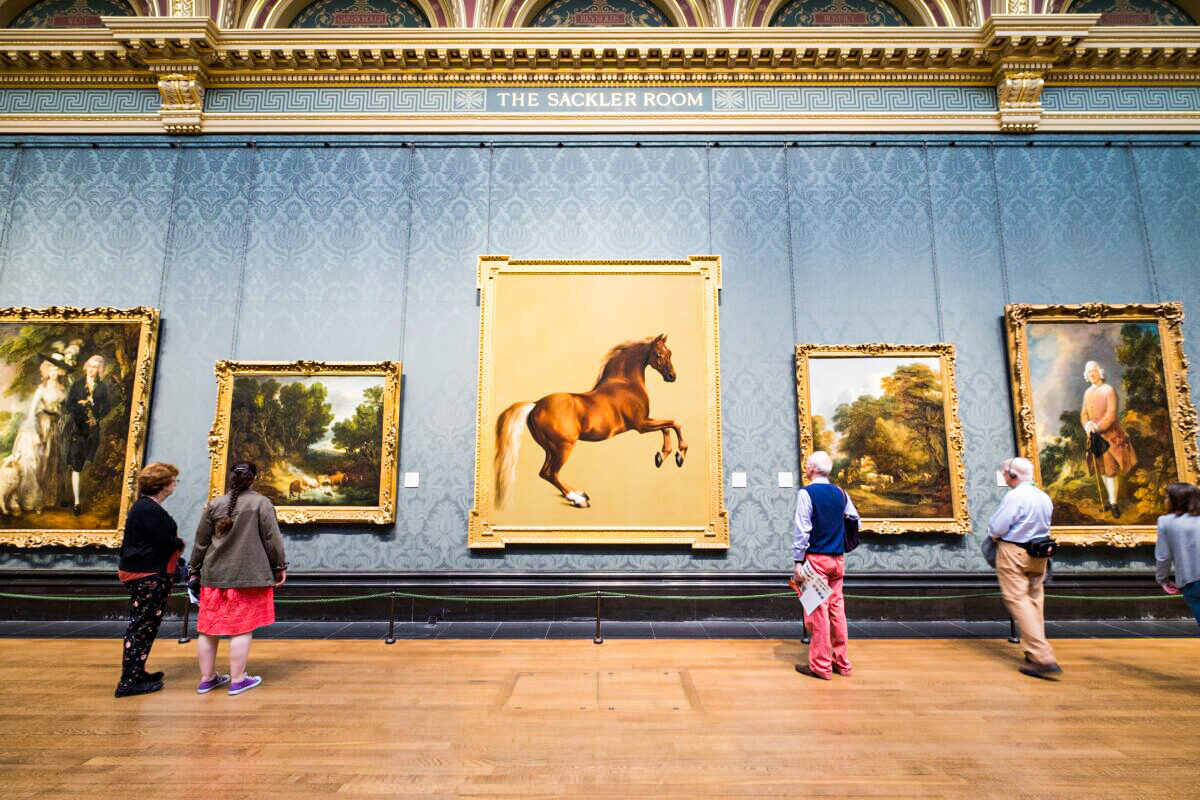 Capturing the Strength and Spirit of the Noble Horse

LONDON—English artist George Stubbs painted a stallion so true to life that, as you approach, you can almost catch a whiff of him as he rears and tosses his mane. He’s a tower of strength, on high alert. And he’s not happy. His nostrils flare and his eyes bulge as he pulls his head back full of fear, or perhaps in a display of dominance. It’s a wild moment to witness, and there’s no sense in the painting of what will happen next.

My instincts make me want to step back to a safe distance in The National Gallery, London, but Stubbs’s expert painting, “Whistlejacket,” demands close attention. I wonder how Stubbs (1724–1806) created each hand of this near-life-size, Arabian thoroughbred from its silky mane and velvet, chestnut coat to the tiny veins on his flank that show just how much the stallion’s muscles contract.

Stubbs’s painting shows the power of both art and nature, and he achieved such mastery through directly copying nature itself, including intently drawing anatomy.

As Britain’s preeminent animal painter, Stubbs took horse art from stock farm and racing images to real characters. In his book “Five Centuries of British Art: From Holbein to Hodgkin,” author and museum curator Andrew Wilton calls Stubbs the “Sporting Raphael,” due to how sensitively he rendered multiple figures in harmonious compositions.

Just like Raphael, Stubbs painted each subject—be it a horse or a person—with care, attention, and character. But Stubbs didn’t idealize his horses; he painted them as nature intended and without sentiment.

For Stubbs, nature was of the utmost importance and the heart of his art.

Stubbs received little artistic training. At age 5, he began drawing with an ardor that was more than a childhood interest, becoming interested in anatomy when he was 8 years old after a doctor gave him some bones to draw.

His father hoped his son would become a currier like him, processing leather, but it wasn’t meant to be. Instead, Stubbs’s father arranged an apprenticeship for his then 15-year-old son with a local artist who was copying art in a nearby estate. The young Stubbs didn’t last long; he didn’t want to copy other artists’ work. He wanted to see for himself, and to learn from nature.

Normally, 18th-century artists would start learning art by copying classical art and architecture, first becoming competent in drawing classical statuary before drawing live models. Stubbs took a different route. From around 1745 and 1751, Stubbs first studied cadavers, including those of pregnant women, at York County Hospital. He even privately studied the body of one woman who died giving birth. A doctor then commissioned Stubbs to draw and etch a series of fetuses in the womb for the doctor’s paper on midwifery.

Stubbs went to Rome in 1754, but it doesn’t appear that he copied any art. He told his friend, Ozias Humphry, that he went to Rome “to convince himself that nature was & is always superior to art whether Greek or Roman.” He therefore felt that studying classical art and sculpture was not the way forward for art, but studying nature was.

Stubbs’s horse paintings are the epitome of his nature studies. He spent 18 months in a barn studying horse cadavers. He’d hoist each one on a series of pulleys and then dissect it in stages from the skin, to the muscle and tendons, and then right down to the bone, drawing as he went. Each horse lasted 11 weeks.

Stubbs studied horse anatomy because he wanted to understand how to portray horses properly, and to leave a guide for other artists, horse handlers, and the like. He didn’t study the organs, since they weren’t needed for him to paint the horse effectively. Those studies became his now famous “The Anatomy of the Horse” (that he etched the plates for, when no engraver was interested), which he published in 1766.

Stubbs’s “Whistlejacket” has a magnetic, timeless appeal. Even from afar, this huge and enigmatic portrait seems to follow me around the gallery, much like Rembrandt’s portraits do.

Some experts believe that the painting’s empty background, stripped of any indication of when it was painted, is a nod to classical marble friezes as the 2nd Marquess of Rockingham, who commissioned the painting, was at the time building the best collection of classical sculpture in Europe.

Whistlejacket may not have been as successful as other racehorses, but the painting is famously an ode to nature and to Stubbs’s brilliance in painting true to life.

To find out more about “Whistlejacket” by George Stubbs, visit NationalGallery.org.uk