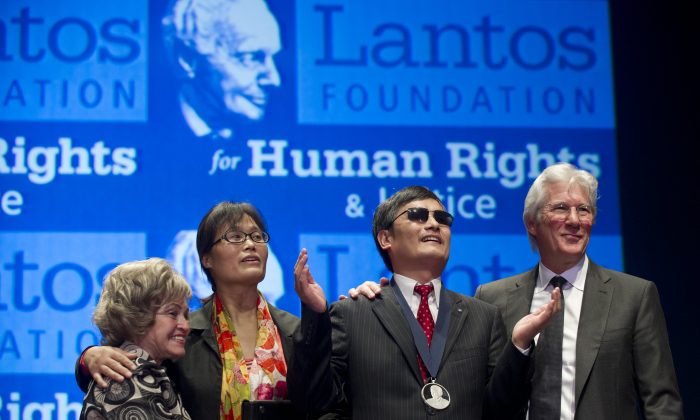 Remember Richard Gere? I certainly do. He was a huge star in the 1990s, playing memorable roles in such movies as “Pretty Woman,” “American Gigolo” and, last I recall, “Unfaithful.” Then, Gere largely disappeared. I noticed this, but never wondered why. Now I know. Gere got cancelled by Hollywood because of his criticism of Chinese regime tyranny.

The story of Gere’s cancellation is told in a new book by Erich Schwartzel, titled “Red Carpet: Hollywood, China and the Global Battle for Cultural Supremacy.” Schwartzel embeds Gere’s story inside a larger account of Hollywood’s larger business plan for China. The lesson of Schwartzel’s book is that when you want access to a market controlled by the Chinese communists, you have to go a long way to do their bidding.

Gere’s hostility to the Chinese regime is certainly not due to the fact that Gere is a right-winger or that he interprets Chinese interests as opposed to those of his own country. Nothing like that. Rather, Gere is a Buddhist and, as such, he’s an admirer and supporter of the Dalai Lama, whom Chinese officials view as an enemy of the Chinese state.

In 1993, Gere deviated from his presentation of an art direction award to deplore the “horrendous human-rights situation there is in China, not only towards their own people, but to Tibet as well.” But Gere’s great sin came in 1997 when he made the movie “Red Corner,” a story of a U.S. executive who becomes trapped in and experiences the horrors of the Chinese criminal justice system.

“Red Corner” wasn’t a box office hit; it was sidelined that year by big movies such as “Men in Black” and “My Best Friend’s Wedding.” So the Chinese didn’t care about it on account of it being seen by huge numbers of people. What they did care about is that Gere went beyond acting in the film. He also championed the film as a cause.

While MGM treated the film as merely a thrilling story, Gere insisted the film could be a “catalyst for change in the world,” because it exposed the horrors of Chinese totalitarianism. Interestingly, Chinese president Jiang Zemin visited America around the same time, seeking more trade deals and closer diplomatic ties with the Clinton administration. While President Bill Clinton held a state dinner for Jiang, Gere organized a “stateless dinner” across the street on the rooftop of a posh hotel, inviting fellow celebrities Uma Thurman and Sharon Stone.

Schwartzel documents that as Gere continued to champion the cause of Tibet, and castigate China for its human rights abuses, Hollywood became more and more uncomfortable with his public advocacy. The late 1990s and early 2000s corresponded with a period in which the American movie market was flattening out, and Hollywood studios increasingly looked to expand in China.

China, after all, has more than a billion people. It didn’t escape the attention of studio executives in California that tens of millions of Chinese were moving from the rural areas to the cities, and they were becoming avid consumers of Western products. Hollywood salivated at the prospect of tapping this market for American movies.

Of course, the Hollywood executives understood they were dealing with a communist regime that didn’t hesitate to censor the films that were allowed into China. They were quite willing to accommodate the Chinese on this point. Schwartzel points out that the in 2006, “Mission: Impossible 3” edited out scenes the Chinese objected to, and in 2012, the producers of the James Bond film “Skyfall” removed a scene involving the killing of a Chinese security guard, because the Chinese censors felt it made the Chinese look weak.

In this atmosphere of Hollywood courtship of the Chinese communist regime, Schwartzel reports that “Gere was too radioactive to hire.” His mere presence in the credits might mean the film would not be approved for release in China. At this point, Gere became persona non grata, at least as far as the big studios were concerned. He would have to be content appearing in independent, modest-budget feature films such as “Arbitrage” and “The Second Best Exotic Marigold Hotel.”

In the 1950s, Hollywood maintained a blacklist of actors who supposedly had communist associations and therefore were deemed too controversial to play in big movies. How ironic that today, once again, Hollywood maintains a blacklist, only this time it’s for apostates like Richard Gere who are apparently not sufficiently friendly and deferential to the Chinese communist regime.

Gere has been surprisingly quiet about his blacklisting. In June 2020, however, Gere did testify before Congress (pdf) in favor of a bill to give the United States better access to the cashmere market in Mongolia. Gere argued that the bill would bolster Mongolia’s economy and make it less dependent on China, since dependency in that region quickly translates into Chinese control.

At one point, Gere brought up the movie that seems to have gotten him off the Hollywood A-list, “Red Corner.” Gere speculated about whether Hollywood would make a movie like that today.

“It simply would not happen,” he confessed.

The cancellation of a star of the magnitude of Gere shows how bad the problem is, how much in bed Hollywood is today with its grim partners in the East.