‘Canary in the Gold Mine’: Asset Seizures Could Skyrocket Due to Post-Pandemic Debt Default, Says Bailiff 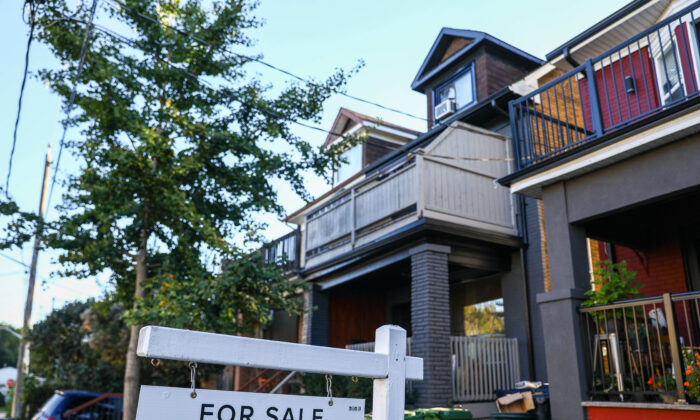 A for sale sign is displayed in front of a house in the Riverdale area of Toronto on Sept. 29, 2021. (The Canadian Press/Evan Buhler)
By Jeff Sandes

Jeff Sandes
Jeff Sandes is a freelance contributor to The Epoch Times based in the Vancouver area.
View profile
biggersmaller
Print

North Central Bailiffs in Kelowna, B.C., is busy. In fact, as pandemic restrictions and mandates continue to ease, owner Mike Sundstrom has never had more work end up on his desk.

From Sundstrom’s vantage point, the industry where he makes his living as a licensed bailiff and licensed sheriff isn’t prepared to handle the massive surge of claims he predicts is just around the corner.

His firm, one of several bailiff firms in the province, gets to see a sweeping overview where most of the financial and economic sectors collide. And given how many lenders and government agencies hit the pause button on collections during the past two and a half years of COVID-19 when Canadians’ ability to pay was most fragile, Sundstrom says every sector is now beginning to call him.

“[Bailiffs are] the canary in the gold mine,” he told The Epoch Times.

From banking to car dealerships to residential defaults, he says asset seizures continue to climb. Yet, he says, what has him even more concerned is the fallout when the slow pace of government claims such as tax files eventually make their way through the system.

“Every time I turn around there’s a new file coming in, and we’re seeing this all at once,” Sundstrom says.

“Everything is up. Repossessions are up, evictions are up. And this even though we’re not seeing Revenue Canada, PST [provincial sales tax], and WCB [Workers’ Compensation Board] back to full speed. They’re sitting on the edge of the dam with all of that workload behind them that they’ve held back because of COVID-19. And it’s just a matter of time before they can’t hold it back any further.”

Sundstrom says a combination of financial and social factors have contributed to the dramatic increase.

“There’s quite a number of things that are going on all at the same time that we’re seeing,” he said.

“Definitely the post-COVID hangover in the economy that’s going on. And there’s this productivity slump with all kinds of jobs everywhere but nobody wants to work. And then there’s inflation. And then there’s the interest rates trying to counter the inflation. And underneath all of the usual suspects in a poor economy, especially with evictions, is an acute drug crisis that’s going on.”

Freida Richer, a licensed insolvency trustee with Grant Thornton LLP based in Edmonton, says her office has seen an increase in people looking for advice on dealing with debt they can no longer afford to pay.

“I think that the post-pandemic financial picture is really different from the pre-pandemic picture,” Richer said in an interview.

“Maybe they’ve gone back to work but with significantly reduced income, or some people haven’t gone back to their old job because it no longer exists. Another factor is the debt levels, which have not decreased. And based on the discussions I have with consumers and other insolvency trustees, [Canadians] have had to use credit to supplement their lack of income. And at the end of the day, do you dig yourself into a bigger death hole?”

Part of the challenge, Richer adds, is that banks, credit card companies, and other lenders stopped their collections when people defaulted on their payments, or didn’t seek aggressive collections or wage garnishments during the past couple of years. That trend has now changed, she says.

In its 2022 Financial System Review, Bank of Canada Governor Tiff Macklem said it’s important to be prudent with high debt loans and associated burdens during a high-priced housing market—especially when the central bank looks to curb inflation with higher interest rates.

“[H]igh household debt and elevated house prices are vulnerabilities,” Macklem said upon the release of the review.

Statistics Canada’s consumer price index calculated inflation at 6.9 percent in September on a year-over-year basis, a slight drop from 7 percent in August, and down from 7.6 percent in July and 8.1 percent in June.

Equifax Canada’s Sept. 6 Market Pulse quarterly consumer credit trends publication says that compared to the second quarter (Q2) in 2021, total consumer debt increased 8.2 percent to $2.32 trillion during the same quarter this year. It adds that increases in new lending and higher spending linked to inflation pushed non-mortgage debt to $591.4 billion, up 5.2 percent from Q2 2021. In addition, credit card balances for consumer segments with a credit score lower than 620 rose 16.2 percent from Q2 2021. Moreover, consumer insolvency rose to the highest level since the start of the pandemic.

Rebecca Oakes, vice-president of advanced analytics at Equifax Canada, said Canadians are feeling the pinch as the cost of living is rising faster than their incomes can support.

“Financial stress is becoming a very real thing for many more Canadians,” Oakes said in a news release.

“Its impact on consumer credit is not just visible in day-to-day credit card spending, but also in other non-mortgage debt like auto loans and lines of credit where balances are on the rise. … Early indications in our data suggest financial stress is starting to emerge; Canadians should continue to be mindful of their spending and debt obligations.”

Still, despite some of the concerning numbers published by Equifax, statistics supplied by the Canadian Bankers Association (CBA) illustrate a positive and historical trend as the amount of mortgage arrears in Canada continue to remain low.

CBA director of media strategy and communications Mathieu Labrèche told The Epoch Times that Canadians find ways to pay their mortgages, among other debts, and that resiliency should continue. And even when they struggle to pay, their lenders will usually work to help them out.

“The overall environment right now is challenging and difficult, that’s absolutely true,” he said. “But historically, Canadians have always taken their mortgage payment seriously and they tend to meet them on time. But with the banks, the door is always open if you encounter hardship or economic challenges, so there are options available.”

Richer says that while the economic forecast may be grim, there are ways to deal with their financial trouble before going into bankruptcy. And if somebody can’t find a way to catch up their debt through options like a consolidation loan or by liquidating their assets, for example, they can move into a consumer proposal to try and work out an agreement to repay their lenders a portion of what they owe. Bankruptcy would be the final choice.

“If things are that bad that you need to have that financial fresh start, what I tell people who come in is that there is a solution,” she said. “It might not be the solution that you ever desired, but it is a solution.”

Jeff Sandes
Jeff Sandes is a freelance contributor to The Epoch Times based in the Vancouver area.