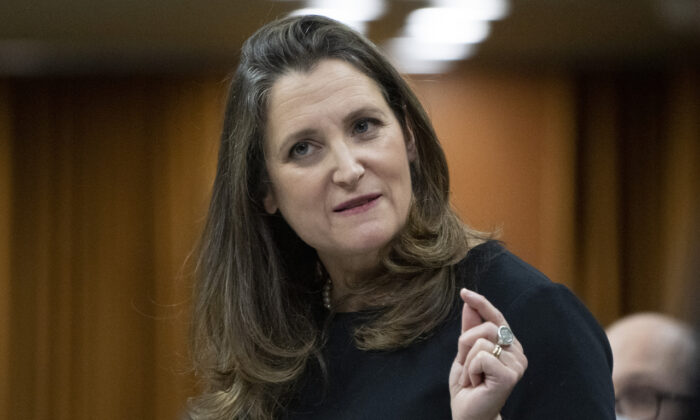 As Canada ramps up sanctions against Russia in recent days in response to its invasion of Ukraine, Deputy Prime Minister Chrystia Freeland acknowledged on March 1 that Canadians could feel some repercussions from the measures.

“At the end of the day, if we are truly determined to stand with Ukraine, if the stakes in this fight are as high as I believe them to be, we have to be honest with ourselves, I have to be honest with Canadians, that there could be some collateral damage in Canada,” she said during a press conference in Ottawa.

Freeland, who’s also finance minister, said she discussed with other G7 finance ministers earlier that day and they agreed that “in order to be really effective, in order to really have an impact, we are going to have to be prepared for there to be some adverse consequences for own economies.”

The minister said that although Canada will be impacted, it is much more the case for European countries.

Russia supplies around 40 percent of the European Union’s natural gas and prices there are now hitting record highs, reported Reuters.

The consequences for Canada if Russia successfully occupies Ukraine will be much greater than the cost Canadians need to pay in absorbing the potential fallout of Canada’s current actions, Freeland said.

Freeland did not elaborate on how exactly Canada would be affected if Putin takes over Ukraine, but the government’s steady messaging on the issue is that Putin has broken the longstanding peace and stability in Europe and the international rules-based order.

“If Russia were permitted to succeed in this, we would be in a very different world from the world we have all known. And it would be a world very dangerous to Canada,” said Freeland.

Canada, in lockstep with allies, has already imposed a host of sanctions on Russia, such as on its financial sector and on a number of oligarchs and officials, including Russian President Vladimir Putin.

Freeland said these measures are the strongest ever imposed on a major economy and additional sanctions are coming that will target the institutions and people that “aid and enable President Putin.”

Freeland would not give details on the upcoming measures, but said that the Ukrainian Finance Minister Serhii Marchenko shared with his G7 counterparts “some very creative and thoughtful ideas.”

Ottawa recently banned imports of Russian oil but not other commodities. The government said it was not currently importing Russian oil, but in 2019 Russian oil constituted 3 percent of Canada’s imports.

Canada’s trade with Russia is minor, with Russian imports in 2020 totalling $1.19 billion. The most imported products were mineral fuels, fertilizers, metals, and rubber.

Despite these imports not being banned, Canada announced on Mar. 1 a ban on Russian vessels from entering Canadian waters and ports.

The impending fallout from the conflict and sanctions imposed by the West on Russia comes at a bad time for Canadians, as recent home and gas prices were already breaking records.

The price of gas was soaring to new heights before the start of the Russian invasion on Feb. 24, and since then, the price of West Texas Intermediate (WTI) crude oil went from US$92.10 to US$106.26 on March 1.

Dan McTeague, gas price expert and president of Canadians for Affordable Energy, is predicting a gas price hike of up to 14 cents per litre in some Canadian cities on Mar. 3. He predicts the price of gas will climb 14 cents per litre in Regina and Saskatoon and 7 cents in Toronto and Montreal. The increase of the federal carbon tax on Apr. 1 will add another 8.8 cents a litre.

The rise in energy costs will also drive up the prices of other commodities.

Meanwhile, the cost of borrowing will also increase as the Bank of Canada announced an interest rate hike on Mar. 2, with more increases expected this year in order to cool soaring inflation.