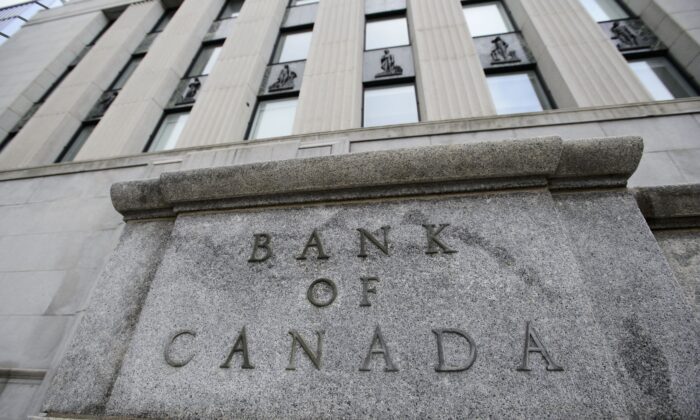 The Bank of Canada is shown in Ottawa on April 24, 2019. (The Canadian Press/Sean Kilpatrick)
Canada

Fifty-three percent of Canadians say they don’t have confidence the Bank of Canada is making the right decisions in its fight against inflation, poll shows
By Bogdan Diordiev

Runaway inflation and lack of trust in the Bank of Canada mean a majority of Canadians are reluctant to make major purchases, a new Angus Reid Institute poll finds.

June’s inflation rate was at 8 percent—the highest since January 1983.

The online survey of 1,606  adults, conducted between July 18 and 20, found that 75 percent of Canadians think it’s not a good time to make major purchases, such as buying a home or car, doing home renovations, or taking big vacations. This is an increase from 56 percent in July 2020.

As inflation pushes up the price of essentials such as groceries and gas, 28 percent of Canadians describe their financial situation as bad or terrible, the survey showed, noting that this demographic is “barely keeping their head above water or worse when it comes to their finances.”

Manitoba has the highest percentage (40 percent) of the population experiencing bad or terrible financial situations. In Saskatchewan and Atlantic Canada, 36 percent say they are in poor financial shape. Conversely, over 77 percent in Quebec say they are in good or great shape financially, the most in the country.

In addition, the poll showed that 70 percent of Canadians are following the Bank of Canada’s actions closely, with 53 percent saying they are not confident that the bank is making the right decisions.

Conservative Party voters showed the least confidence that the BoC is making the right decisions, at 26 percent. NDP voters ranked next with 34 percent having confidence.

Liberal and Bloc Quebecois voters show the most trust in the bank’s decision-making, with Bloc voters at 53 percent and Liberal voters at 47 percent.

“While faith in the Bank of Canada is higher among past Liberal and Bloc voters, still at least two-in-five among those voting groups are not confident in the BoC’s strategy to fight inflation,” the survey says.

The Bank of Canada raised its key rate from 1.5 percent to 2.5 percent on July 13, and has signalled more hikes will be needed.