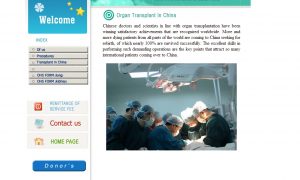 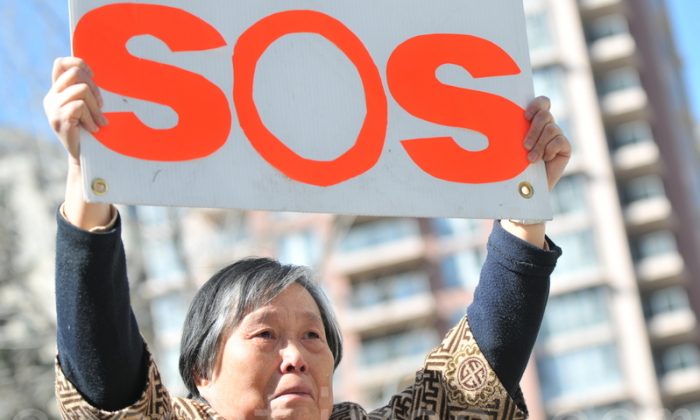 Huang Jinling holds an SOS sign at a press conference in Calgary on April 15, 2014 calling for help to rescue her daughter Chen Yinghua from a detention centre in China where she is said to be near death from a hunger strike. (Wu Weilin/Epoch Times)
China

Two Conservative MPs are calling on the Chinese authorities to release a woman imprisoned in China with family members in Canada who has been on a hunger strike for over a month and may be near death.

James Lunney and Joan Crockatt have made a plea for the immediate release of Yinghua Chen, 41, a Falun Gong practitioner who is being held at a detention centre in Shijiazhuang, about 300 km from Beijing.

“Yinghua Chen’s life is in imminent danger. Chen’s father, a Calgarian and a Canadian citizen, was turned away from seeing her [on April 15] at the No. 2 Shijiazhuang Detention Centre and he is desperately concerned over her safety, as am I,” Crockatt, MP for Calgary Centre, said in a statement.

The two MPs also wrote a letter to China’s Canadian ambassador Zhang Junsai asking him to intervene on Chen’s behalf.

“Her family is not permitted to see her, but her lawyer visited her in jail on April 13 and said Ms. Chen is very weak and close to death and her condition continues to deteriorate,” Lunney wrote.

“Please do everything in your power to ensure she does not perish in jail for no reason.”

Chen was arrested in Shijiazhuang on March 12 as she was accompanying her niece, Bian Xiaohui, who was attempting to visit her father in the detention centre. Her father was imprisoned for practicing Falun Gong, a traditional Chinese spiritual practice that has been persecuted by communist authorities in China since 1999.

After her request to visit her father was rejected, Bian protested in front of the prison, holding a banner saying, “I want to see my father.” Both women were subsequently arrested, according to Chen’s mother, Jinling Huang, who spoke at a press conference in front of the Chinese Consulate in Calgary on April 15.

“Help my daughter, she’s dying!” Huang, a former engineer who was herself imprisoned and tortured in China for practicing Falun Gong, cried out at one point during the press conference.

Chen’s father, Chen Zhiming, has also been prevented from visiting her. Chen is accused of “using heretical religious activities to undermine the implementation of the law,” her father said in an interview.

The vague charge is often used by police against Falun Gong practitioners, but lawyers in China see it as a charge not grounded in Chinese law.

“They arrested her first and cooked up a charge to punish her,” Chen’s father said.

This is not the first time that Chen has been detained. She was arrested in August 2003 and brutally tortured during detention. After she went on hunger strike for 39 days, she was subjected to force-feeding which caused severe stomach hemorrhaging, putting her in a life-threatening situation. She was released in October after her brother in Canada called on the international community to help secure her release.

Chen was arrested again in July 2013 and detained for 11 days. She started another hunger strike to protest against the mistreatment and was later released.

Falun Gong, a meditation practice that teaches the principles of truthfulness, compassion, and forbearance, was practiced by over 70 million people in China by the late 1990s, according to official figures. The crackdown that began in 1999 has seen hundreds of thousands sent to labour camps or prisons, where they are often tortured severely.

“Black jails” and Legal Education Centers are also places where security agents attempt to force Falun Gong practitioners to give up their beliefs.