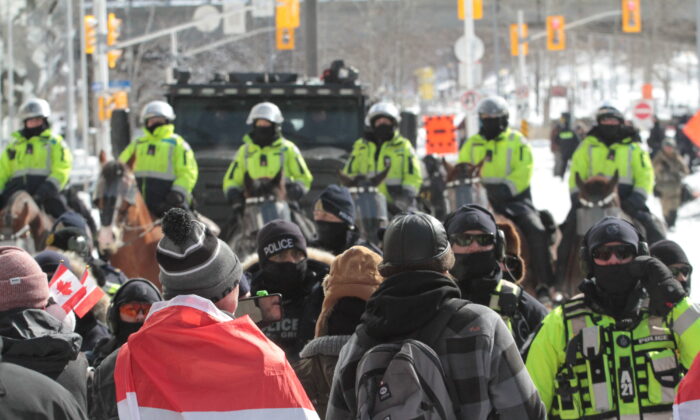 Canadian authorities have frozen the financial assets of individuals and companies that are allegedly involved in the ongoing protests in Ottawa Mike Duheme, Royal Canadian Mounted Police (RCMP) deputy commissioner of federal policing, announced on Feb. 20.

Duheme said at a news conference that the RCMP froze 206 financial products, including bank and corporate accounts, and disclosed the information of 56 entities associated with vehicles, individuals, and companies.

It is unclear what will happen to the money that has been frozen by financial institutions.

“We continue to work at collecting relevant information on persons, vehicles, and companies and remain in daily communication with the financial institution to assist them,” Duheme said.

Deputy Prime Minister Chrystia Freeland said on Feb. 15 that banks would be able to freeze the personal and corporate accounts of anyone suspected to be linked with the protests, and would not require a court order to do so.

Crowdfunding platforms and the payment services providers they use would now fall under anti-money laundering and terrorist financing laws, with the changes covering all forms of transactions including those in cryptocurrencies, Freeland explained.

“The illegal blockades have highlighted the fact that crowdfunding platforms and some of the payment service providers they use are not fully captured under the Proceeds of Crime and Terrorist Financing Act,” said Freeland.

Her announcement came as Prime Minister Justin Trudeau invoked the Emergencies Act for the first time in Canada’s history to address the impact of the ongoing protests against COVID-19 mandates and restrictions by truckers and their supporters.

Prior to Freeland’s announcement, 10 million Canadian dollars ($8 million) had been raised on GoFundMe to support the Canadian truckers protesting COVID-19 mandates.

Yet, the platform on Feb. 4 said that it would not be giving the millions of dollars that had been raised to the organizers anymore and would instead send the money to established charities that have been “verified by GoFundMe.”

However, a day later the platform changed course and said it would automatically reimburse the funds to donors.

In response, House Republicans on Feb. 10 urged Democrats to hold a hearing to examine what they called “Big Tech silencing” and accused the for-profit crowdfunding platform of “selectively discriminating against certain people by canceling their ability to organize funds through its crowdfunding platform.”

In a letter (pdf), House Minority Whip Steve Scalise (R-La.) and Rep. James Comer (R-Ky.) also accused GoFundMe of attempting to “defraud hardworking taxpayers of millions of dollars in donations received in support of an organization promoting individual freedom, by trying to divert that money away from them and instead funnel it to other unrelated causes.”

The GOP lawmakers also asked GoFundMe to provide all documents and communications related to their decision to do so.

GoFundMe did not respond to a request for comment from The Epoch Times.

Following GoFundMe’s announcement that it would redirect the money raised to charities, protest convoy organizers set up the “Freedom Convoy 2022” fundraiser on GiveSendGo.

However, the government of the province of Ontario in Canada on Feb. 10 successfully sought a court order to freeze the millions of dollars in funds raised on that platform until further notice.

Meanwhile, some critics have said the Canadian government’s move to use financial powers to quell the trucker protests amounts to unnecessary overreach.

Financial crime consultant Vanessa Iafolla, an expert on matters related to fraud, money laundering, and terrorist financing, told The Epoch Times, “These new powers are a broad overreach and I do not believe they are steps necessary to maintain public order.”

Iafolla said the action sets a dangerous precedent as it could allow governments to target protesters economically for their political beliefs in future protests.

“In a vibrant and mature democracy, citizens and government should be able to tolerate disagreement and dissent, and our charter rights to protest should not be cast aside in such a heavy-handed and undemocratic way,” she said.

The organizers of the Freedom Convoy in Ottawa have repeatedly said that their protest is peaceful.

But in a virtual press conference on Feb. 18, Freeland and several federal cabinet ministers defended their decision to use broad financial powers amid the protests, stating that Canada’s economy and democracy are “facing a serious and foreign-funded threat.